Record Fall Across the Board at Fasig-Tipton New York Sale 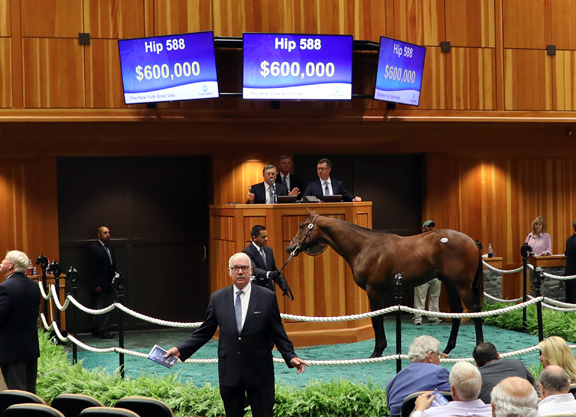 A colt by Pioneerof the Nile (hip 588) became the auction's highest-priced offering when selling for $600,000 to John Ed Anthony's Shortleaf Stable. The yearling was consigned and bred by Jonathan Thorne's Thorndale Farm. During Saturday's session of the two-day sale, a daughter of American Pharoah became the sale's highest-price filly when bringing $450,000. That yearling was bred by Joanne Nielsen's Sunnyfield Farm.

“Jonathan Thorne and his family are long, long time supporters and advocates of the New York markeplace,” Browning said. “And last night, we had the Nielsens, who were another sort of taproot human family to the New York breeding program. So it's a testament to their commitment, both to the overall Thoroughbred industry, and to the New York program, and also to producing quality horses. They were richly rewarded as a result of that.”

“I think you saw tremendous diversity among the buyers tonight,” Browning said. “There were certainly some new names on the results who haven't been active previously in the New York-bred marketplace. I think that's a direct result of the quality and the success New York-breds are achieving all over the world.”

Ed Anthony, bidding on behalf of his father John Ed Anthony's Shortleaf Stable, bid a sale record $600,000 to acquire a colt (hip 588) by Pioneerof the Nile late in Sunday's final session of the Fasig-Tipton New York-Bred Yearling Sale. The colt, who bettered the mark of $500,000 set by a Cairo Prince colt last year, is out of Score (A.P. Indy). The mare is a daughter of multiple Grade I winner Educated Risk (Mr. Prospector) and from the family of champion Inside Information.

“With that pedigree, I knew there would be plenty of competition,” said Anthony, who is responsible for the pedigree analysis for potential Shortleaf runners, having worked for Three Chimneys, as well pedigree analyst Bill Oppenheim. “Pioneerof the Nile is a sire of sires and it looks like he's going to go a lot further than he already has. If you're looking for stallion prospects and want to be relevant in the Classic picture and the Triple Crown trail, you have to pony up sometimes and play the game.”

The bay yearling was consigned by Jonathan Thorne's Thorndale Farm. A longtime New York breeder, Thorne purchased Score, with this record-setting colt in utero, for $120,000 at the 2016 Keeneland November sale.

“The horse is an incredible horse,” Thorne said. “He's been a beautiful horse since he was born and he's just gotten better and better. He's a very intelligent and honest horse. I'm proud of my horse and I'm proud of my team at the farm to get him to this point. It's special. I think he's got a great future, so I can't wait to watch him.”

Thorne is the ninth generation to live at his family's Thorndale Farm in Millbrook, New York. His family began breeding horses in 1980 when he was six. While he grew up on the family farm, he admitted it was one horse in particular that cemented his love of racing. Thorne served stints at Gainesway, Eaton Sales and Derry Meeting Farm before going out on his own at Thorndale, where he bred 2009 GIII Florida Oaks winner Don't Forget Gil (Kafwain).

“It feels great,” Thorne said of the record achievement. “All of us around here have been doing this for a while and everyone has stepped up their game as the quality of the New York-bred crops continues to rise every year. We are all trying to up our game and keep producing high-quality horses.”

Asked if he had considered sending hip 588 through the sales ring during last week's select sale, Thorne said, “Fasig-Tipton had offered that, but I like to support Fasig-Tipton for conducting this [New York-bred] sale and the October sale in the first place. It really helps the program and a lot of the players. This is a great sale and it continues to get better and better every year. I don't see that stopping–I'm just trying to keep up. I'm trying to keep up with my good friend Joanne Nielsen.”

Nielsen's Sunnyfield Farm sold a colt by American Pharoah during the select sale for $1 million and topped Saturday's open session of the auction with a filly by the Triple Crown winner who sold for $450,000.

As for Score, Thorne's partnership with the mare was profitable but short-lived.

“She did not get in foal last year, so I thought it might be an ok idea to sell her in Fasig February last year and some good friends bought her from me, Alex Solis and Jason Litt,” Thorne said. “So they have the mare and they bred her back to Classic Empire. She is a lovely mare and a pretty good buy. So I hope for the best for them as well.”

Solis and Litt purchased the mare for $45,000 at this year's February sale.

Risky Pays off Again for Bacon

Sanford Bacon, who campaigned his homebred filly Risky Rachel (Limehouse) to six stakes wins between 2011 and 2014, offered the first foal out of the mare named after his granddaughter and was immediately rewarded when the colt by Scat Daddy brought $1 million from Coolmore's M.V. Magnier at this year's Fasig-Tipton Gulfstream sale. Through the Paramount Sales consignment, Bacon offered Risky Rachel's second foal, a filly by Into Mischief, Sunday in Saratoga and the yearling (hip 573) attracted a final bid of $350,000 from Jeff Drown's Kindred Stables.

“We have a Tiznow [weanling] coming up, so we will see what happens with him,” Bacon said after watching the yearling sell. “And then we a 50%-share taking another shot with Into Mischief.”

“I just hope the people who bought her keep her here in New York and give her the opportunity to make a lot of extra breeders awards,” Bacon said with a chuckle. “In the end, the money is all going to charity anyway.”

Asked if he was tempted to retain any of the mare's foals to race himself, Bacon said philosophically, “When you get to be my age, you'd love to race them all. I'd love to be here to race them, but at 90, I'm not counting on it. But I would love to do this same interview next year.”

A colt by City Zip will likely reappear in a sales ring next spring after Randy Bradshaw signed the ticket at $300,000 for the yearling (hip 530) out of the unraced Nick's Honor (Jump Start).

“I liked everything about him,” Bradshaw said. “He's a June foal, but he has plenty of size. He's by City Zip and the mare has done nothing wrong. She's a very good mare. We are just hoping down the road we can make a little money with him. We'll probably put him in the April sale at OBS and see if we can do well with him.”

The yearling was consigned by Indian Creek on behalf of breeders Jamie Lamonica, Lee Sacks and Soave Stables.

“He was a nice colt, a June 2 foal, but he's never done anything wrong,” Lamonica said. “He's just nice horse.”

The 14-year-old Nick's Honor never made it to the races, but her offspring have enjoyed plenty of success in the afternoon. She is the dam of stakes winners The Lewis Dinner (Posse) and Kelli Got Frosty (Frost Giant) and the stakes placed Princess Phoebe (Defer) and Frosty Gal (Frost Giant).

Lamonica was co-founder of Empire Stud and Nick's Honor was a part of that program.

“We have three mares, two of them are in New York,” Lamonica said. “We love the New York program and we had the farm up here, Empire Stud, for a long time. This mare started out as a product of that. We bought that mare with a partnership as a 2-year-old in training and she was very talented. She's a huge mare, she's 17.1h. She fractured a hip before her first start, so we just bred her to the house stallions. And then she kept having stakes horses, so we decided to go to Tale of the Cat and City Zip. Actually it's a little sentimental because this yearling was the last City Zip ever born. City Zip was very good to me over the years. So this was important.”

Of the increasing success of the New York breeding program, Lamonica said, “It's remarkable the job that everyone has done– the New York breeders, the sales company, the farms up here. That mare foaled at Rock Ridge and Lere [Visagie] did a great job with her. They come down [to Kentucky] and go to Indian Creek and they, in turn, did an amazing job in turning him out here. It's all those type of people that are raising the bar here. It's the farms in New York. And it's the people in Kentucky doing their job, too. So they are working well together. And you're seeing it in the sales ring.”

When hip 520, a filly by Normandy Invasion, sold for $170,000, it was a successful, but bittersweet, result for Danielle Jones. Jones purchased the yearling with her mother Brenda for $30,000 at last year's Fasig-Tipton New York Mixed Sale.

“My mom had been in the business a long time,” Jones explained. “She and I came up in October to buy a couple of horses and this filly was one of them. She passed away a week ago. So this sale was bittersweet, but she would have been very happy.”

The Joneses own Silver Oaks Farm in Ocala and Danielle is a client liaison at Gainesway and runs inspection cards at the farm's sales barns.

Of the yearling's appeal last fall, Jones explained, “I loved her leg and the way she walked. She was very elegent. She is by a first-year sire, so there is nothing going against her. Normandy Invasion is a son of Tapit, so I don't think you can go wrong with that.”

She continued, “[The final price] far exceeded what I thought was going to happen. I tend to keep realistic expectations, but I wasn't willing to give her away for less than $75,000. So I was very happy with what she brought and who she is going to.”

Out of Muffy (Tomorrows Cat), the yearling was purchased by Vineyard Ventures.