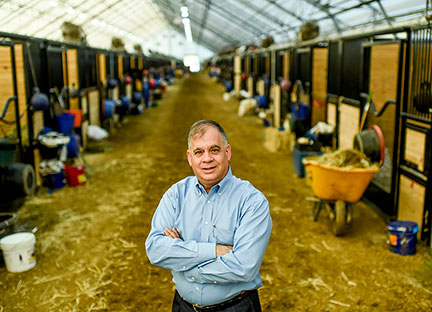 The Stronach Group has shelved plans to open a Thoroughbred racetrack on the location of the defunct greyhound track in Raynham, Massachusetts. Stronach Group Chief Operating Officer Tim Ritvo made that announcement while taking part in the latest Thoroughbred Daily News podcast, but also said the company remains very much behind the idea of opening a track in the Bay State.

Suffolk Downs is the only remaining Thoroughbred track in not only Massachusetts, but all of New England, and currently races only a handful of days each year. Suffolk, which was unable to obtain a casino license, is scheduled to cease operating completely following its short season in 2018. Hoping to fill that void, Stronach Group officials had said earlier this year that they were attempting to convert the former dog track into a Thoroughbred facility. Raynham is about 50 miles south of Boston.

On the podcast, Ritvo said that the Stronach team had come to the conclusion that re-opening Raynham for Thoroughbred racing was not a practical idea.

“With the Raynham site, we did some surveys and studies and discovered it just couldn't get us what we were looking for,” Ritvo said. “Initially, we were looking to try to create a smaller racetrack, something along the lines of a three-quarters-of-a-mile track, and keep the existing grandstand. That way we could get into the marketplace quickly to get racing back up and running in Massachusetts. Since then, I have talked to Frank [Stronach] and Belinda [Stronach] and they thought a better idea would be to find some property where we could build a proper racetrack, a one-mile racetrack.”

Ritvo said that efforts are now underway to find a location for a new track.

“Boston is a top-five priority within our company and it might even be in the top two or three when it comes to things we want to accomplish,” said Ritvo, who began his racing career as a jockey at the New England tracks. “It is a great market and we don't want to see the simulcast market there disappear. We believe Massachusetts has a vibrant economy and is a place where people love their sports. A racetrack run properly there would be able to survive. For us, it's much easier to make that happen with all the synergies we have involving our other tracks.”

Ritvo said the new Massachusetts track would run a short boutique-style meet and would be built in ways that would benefit whatever town it would be located in. He said possibilities would be to build soccer fields in the infield and finding other ways to let the community utilize the facility when it was not racing.

Ritvo said The Stronach Group did not apply for any racing dates in Massachusetts for 2018, but did not rule out opening a track in 2019.

“If you ask me to bet one way or another, I would bet yes, yes that we will be operating a racetrack in Massachusetts within the next few years,” he said.

“We are 100% looking at that,” he said. “Consolidation makes sense. It made a lot of sense in Florida with the two tracks [Gulfstream and Calder] eight miles apart. The industry in Florida did very well with consolidation and I think it would do just as well, if not better, in California.”

Ritvo also gave updates on the efforts to keep the Preakness at Pimlico and the companies plans to bring back the Washington DC International to Laurel. When asked about the Pegasus World Cup, Ritvo confirmed that it will once again be run at a mile-and-an-eighth in 2018 and not at 10 furlongs.