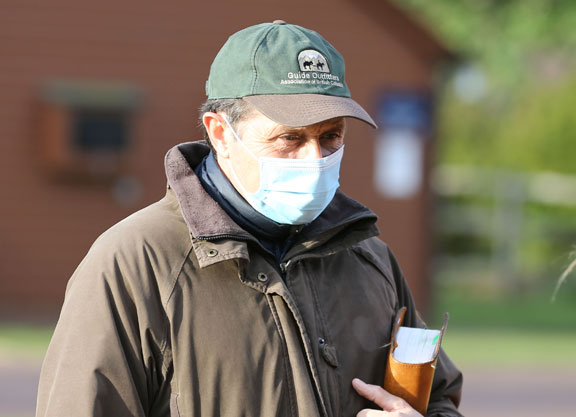 One wouldn't get many pages into this year's Arqana December Breeding Stock Sale catalogue before noticing a sizeable German presence, and one of the standout drafts making the trek from France's neighboring country is that of Ronald Rauscher, who offers 11 mares this weekend. Seven of those go through the ring during Saturday's select session, including two 2020 pattern race winners.

“German-breds have done quite well in the States lately, and in Japan,” he said. “The Yoshida family has been a great collector of German race fillies in the past and I've sold a good few to them over the last few years, so we'll be hoping Japanese participation takes place.”

One of the highlight lots of Rauscher's draft-and the sale as a whole-is likely to be the 4-year-old filly Durance (Ger) (Champs Elysees {GB}) (lot 174). Campaigned as a homebred by Gestut Ebbesloh with trainer Peter Schiergen, Durance won the G3 Mehl Mulhens Trophy last year going 2200 metres and was third in the G1 Preis der Diana and second in the GI E.P. Taylor S. She was second in the G2 Grosser Preis der Badischen Wirtschaft in May this year before winning the G2 Gran Premio di Milano in Italy. Rauscher noted, too, there were excuses for her last of 12 finish in the G1 Prix de l'Opera last time.

“Durance ran second in the E.P. Taylor last year and ran a very good race,” he said. “This year she was slightly unlucky and didn't get the most enterprising rides from the stable jockey at the time. She could have fared a little better, then she wasn't right when she ran in the Opera. She had an infection with a temperature three weeks beforehand and everyone thought she was over it but that wasn't the case. I would put a scratch through that form. If people are still interested in her as a race filly, she's still there and doing well.”

“Durance is a very nice filly with lots of frame and a very strong family,” Rauscher added. “All the half siblings have done very well partly from less commercial coverings.”

Satomi (Ger) (Teofilo {Ire}) (lot 197) heads to Deauville off the back of a season that includes wins in the Listed Hein Bollow-Memorial over 2200 metres and the G2 Grosser Hansa-Preis over 2400 metres over Group 1 winners Windstoss (Ger) (Shirocco {Ger}) and Donjah (Ger) (Teofilo {Ire}). The Markus Klug-trained filly has plenty going for her on pedigree, too, being out of G3 Preis des Winterkonigin scorer Swordhalf (Ger) (Haafhd {GB}) and a half-sister to listed winner and Preis der Diana fourth Sword Peinture (Ger) (Peintre Celebre).

“What is nice about Satomi too is that she's by Teofilo, who has had a super season, the best season he's ever had I think with six individual Group 1 winners,” Rauscher said. “On pedigree, Satomi traces back to Schwarzgold, which would be one of our best German families with Slip Anchor, Sagace and Steinlen which were a good while ago, but there are also Soul Stirring and Stacelita in Japan [from the family]. It's as good as German families get, so Satomi certainly qualifies for a breeding operation.”

Among those being offered on behalf of Rauscher's longtime client Dr. Christoph Berglar is Pleasant Company (Ger) (Siyouni {Fr}) (lot 111). The 3-year-old filly's racing career was unfortunately cut short this summer after she broke her maiden at third asking, but her pedigree should generate plenty of interest. She is out of the listed-winning Peace Society (Iffraaj {GB}), who is a half-sister to G3 Grosser Preis der Landeshauptstadt scorer Peace In Motion (Ger) (Hat Trick {Jpn}), who Rauscher and Berglar sold at this sale two years ago for €860,000.

“Pleasant Company is a very nice filly,” Rauscher said. “She's a typical Siyouni. We sold Peace In Motion out of that family a few years ago and she made a very good price at Arqana. This filly doesn't have the same race record; she had a slight hiccup in the summer where she basically had to quit her racing career, but she's really grown into herself in the time off now. She's strengthened a lot and has a lot of quality.”

Pleasant Company is the first foal out of Peace Society, who has a 2-year-old colt by Protectionist (Ger) named Pure Bubbles (Ger), a yearling colt by the same sire and a filly foal by Sea The Moon (Ger). Peace Society is in foal to champion sprinter Blue Point (Ire).

“I think with that page behind her and her dam being in foal to Blue Point–and we have some very nice Protectionists out of the dam, a very nice yearling and 2-year-old–I think Pleasant Company should find friends in the ring. The family has been very popular in France.”

Ninfea (Ger) (Selkirk) (lot 146) is another from a family that has been very good to Dr. Berglar, and in fact her third dam is Berglar's foundation mare Narola (Ger) (Nebos {Ger}). Ninfea is out of the Preis der Winterkonigin winner Night Lagoon (Ger) (Lagunas {GB}), and therefore a half-sister to the G1 King George VI and Queen Elizabeth S. and four-time Group 1 winner Novellist (Ger) (Monsun {Ger}). The 9-year-old Ninfea was listed-placed herself and has produced two stakes-placed winners from her first two matings: Nayala (GB) (Maxios {GB}), who was second in a listed race going a mile last year, and Nemean Lion (Ger) (Golden Horn {GB}), a €205,000 Baden-Baden yearling purchase by Godolphin who was second in the G2 Prix Chaudenay on Arc weekend. Ninfea has a 2-year-old colt by Adlerflug named New Eagle (Ger), a yearling son of Protectionist and a filly foal by Oasis Dream (GB). She is offered in foal to Nathaniel (Ire).

“Dr. Christoph Berglar and I have a long history with the family; when I was living in Ireland I had Narola as a boarding mare,” Rauscher recalled. “Ninfea is a little different from the family-she's chestnut, and all the rest are dark bays, but being by Selkirk it's not a huge surprise. She's a very nice-looking mare and she has certainly upgraded the two stallions she went to the first couple seasons. Her first foal by Maxios was stakes-placed, and the second one was by Golden Horn. One shouldn't prematurely be negative about him at all, maybe they're just late maturing, but her 3-year-old was second in a Group 2 on Arc weekend. I think she's done tremendously well. The cover by Nathaniel is more an owner/breeder covering and not a commercial one, but she's a very nice mare. I like her a lot and in one way I wouldn't like to see her go.”

During a career in which he has operated out of bases in Canada, Ireland and Germany, Rauscher has bought and sold bloodstock all over the world. He said he has been trending towards taking his consignments to Deauville because France and Germany are currently enjoying a strong synergy.

“German form is generally a little more well known in France than in England,” he said. “If you go back 10 or 15 years, I think German-bred horses were selling well in England. I sold Lady Marian there and she won the [Prix de l'Opera], and I sold Manduro's dam there. It was a time where a few German stallions had retired in England, like Tiger Hill and Shirocco, and a lot of people thought those horses might be commercial, but they weren't really at the end of the day. I think afterwards the English and Irish markets went off German horses a little bit. The French, in their training and the way they approach them, they would be a little different. They got a better tune out of those horses, and I think the French market might suit just a little better. That doesn't mean I won't take anything to Tattersalls, because I have done in the past and we sold very well there just two or three years ago.”

Rauscher described his expectations for the Arqana December market as “optimistic” and reflected on the resilience of the global bloodstock market and the commitment of the major owner/breeders.

“Having watched the foal sale at Tattersalls I was amazed by how resilient it was,” Rauscher said earlier this week. “My expectations would be optimistic especially for those higher end horses. Money seems to be there for them, the same as it was in Keeneland and Fasig-Tipton. People are willing to invest, maybe more long term than short term. The big breeding operations are willing to support their horses, with Juddmonte buying foals now, saying the yearlings were too expensive. You get the feeling that despite all the problems [related to the pandemic] that those people are fully committed and have a long-term plan.”

For those looking to bolster their long-term success in the bloodstock business, a look over the Ronald Rauscher draft at Arqana's December Breeding Stock Sale could prove pivotal.