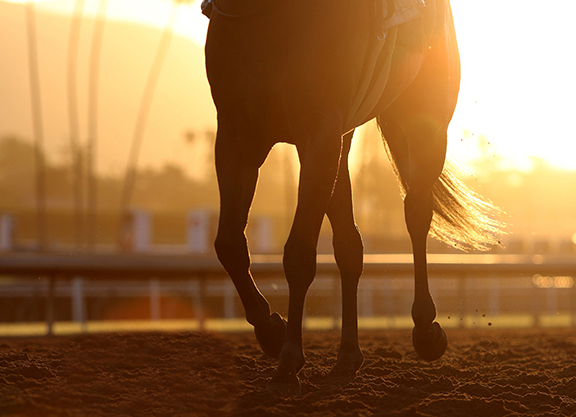 According to the Equine Injury Database, released Monday, there were 1.41 fatalities per 1,000 starters at North American racetracks in 2020, the lowest number recorded since The Jockey Club began compiling injury rates in 2009. The number of fatal injuries declined by 7.8% from 2019 and 29.5% overall since 2009, when the rate was 2.0 per 1,000 starters.

“Overall, there was an 8% decrease in the risk of fatal injury from 2019 to 2020,” said Dr. Tim Parkin, a veterinary epidemiologist. “Since 2009, risk has declined by 29.5% or equivalent to 140 fewer horses sustaining a fatal injury while racing in 2020 than would have occurred had there been no change in risk since 2009. We will dig deeper into the numbers in the coming months to better understand trends in the 2020 data.”

“The continuing reduction in equine fatalities is due to the collaborative effort of the industry stakeholders and regulators putting the safety of the horse first,” said Aidan Butler, COO of racing for The Stronach Group, which owns Santa Anita. “This has been a significant culture change and, while it has required much adjustment from a lot of different parties, this modernization will allow for the sport's future. There is still some work to be done to ensure that  horses in every jurisdiction receive the same opportunity for intervention and injury prevention.

“We are thrilled to be on the low end and back to where we've been historically,” said Dr. Dionne Benson, the chief veterinary officer for The Stronach Group. “This year we are seeing another decrease in our numbers from last year and we are optimistic that we will continue to improve. At Santa Anita, there has ben a complete culture change when it comes to how everyone views racing. It's from the trainers to the jockeys to the racing office to the veterinarians. It has become a culture of safety.”

Once again, synthetic tracks proved to be the safest surfaces among the three surfaces used for racing. The fatality rate on synthetics was 1.02 per 1,000 starters, a bit better than the 1.27 number recorded on turf. The number for dirt tracks was 1.49.

The injury database also revealed that sprint races are more dangerous than route races. The fatality rate for races run at more than a mile was 1.22. It was 1.35 for races run between six and eight furlongs and 1.66 for races shorter than six furlongs.

“Over the past three years, there has been an extremely dedicated safety effort by everyone involved with racing at Del Mar–our owners, trainers, jockeys, regulators, staff and others,” said Del Mar President Josh Rubinstein. “And we have seen a positive change in our culture. There is still more to be done, and we will continue to be laser focused on the safety and welfare of our equine and human athletes.”

Kristin Werner, senior counsel and administrator of the EID, said the work to further reduce the numbers continues.

“Although we are thrilled to see improvement in the numbers from 2020 and commend the racetracks and regulatory authorities in their efforts to reduce injuries, other areas require closer study,” she said. “The recording of additional data through tools like the Electronic Treatment Records System and the Management Quality System of the Racing Surfaces Testing Laboratory will give regulators, racetracks, and researchers a better understanding of horse health and racetrack safety, allowing for additional scrutiny and research aimed at preventing injuries.”