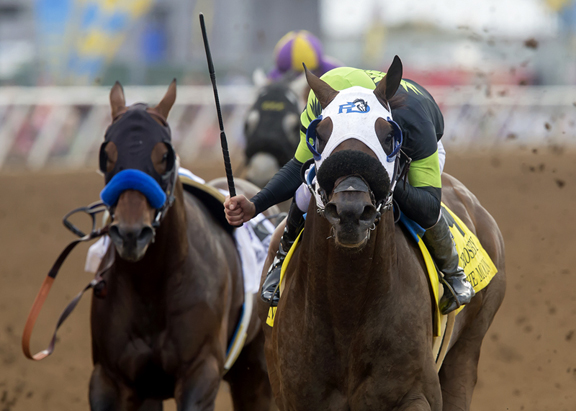 All eyes were on returning champion sprinter Drefong (Gio Ponti), but it was Ransom the Moon who stole the show after the Eclipse winner veered left sharply into the gap at the break, unseating Hall of Famer Mike Smith. Ransom the Moon tracked from fourth as St. Joe Bay (Saint Anddan) led with the riderless Drefong breathing down his neck and Moe Candy sitting third through opening splits of :22.19 and :45.52. Drefong floated St. Joe Bay and Moe Candy out several paths on the turn, opening a clear path on the fence for Ransom the Moon, who slipped through to register a career high. Privately purchased from breeder Sam-Son Farm and transferred from Malcolm Pierce to Phil D'Amato, Ransom the Moon was turned back in distance and switched to dirt to capture an Arcadia optional claimer Apr. 30 and followed suit with a win in the GII Kona Gold S. May 20. He was last seen finishing a neck second behind 'TDN Rising Star' Danzing Candy (Twirling Candy) with a 107 Beyer in the GII San Carlos S. July 1.

The winner's MSP dam–Count to Three–was also Woodbine-based for Sam-Son, but made 20 of her 22 career starts in sprints. Second dam Countus In (Dancing Count) annexed the 1990 GI Matriarch S., and was acquired by Sam-Son for $200,000 in foal to Red Ransom at Keeneland November six years later. That resulting foal became GIII Toronto Cup H. winner Think Red (Red Ransom). Count to Three has an unraced 3-year-old full-brother to Ransom the Moon named Take the Count, and a 2-year-old colt named Count Again (Awesome Again) who has begun prepping for his debut with a series of breezes at Woodbine. She recently produced a Stormy Atlantic colt and was bred back to Dynamic Sky.