Ransom the Moon to Calumet in '19 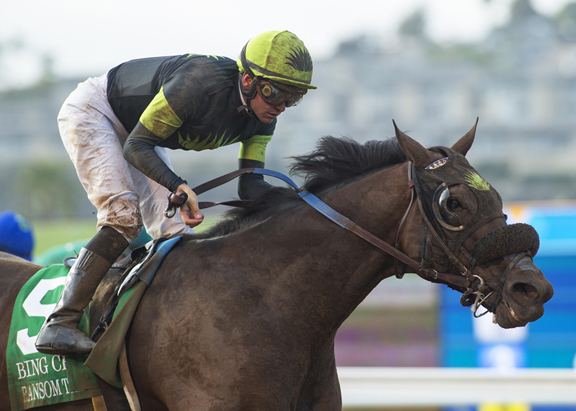 Dual Grade I winner Ransom the Moon (Malibu Moon–Count to Three, by Red Ransom) will stand the 2019 breeding season at Calumet Farm. Conditioned by Phil D'Amato on behalf of Agave Racing Stable and Jeffry Wilke, the Sam-Son Farm bred 6-year-old annexed last year's GI Bing Crosby S., and most recently defended his title in that event at Del Mar July 28.

“As the only Grade I-winning sprinting son of Malibu Moon to go to stud, Ransom the Moon offers breeders with a dirt-speed option on an incredible sire line,” said Calumet Farm's Director of Stallions Jak Knelman. “Since a surface change to the dirt, Ransom the Moon has gone on to win two Grade I races in California, including the 2018 Bing Crosby at Del Mar.”

Knelman added, “To win sprinting in California you have to be fast, and to defeat the likes of champion sprinter Roy H in Grade I competition in both 2017 and 2018 you have to be very good.”

Ransom the Moon is scheduled to make two more career starts, culminating in the GI Breeders' Cup Sprint at Churchill Downs Nov. 4. He will be available for inspection at Calumet in Lexington after the World Championships.

“Ransom the Moon possesses speed, an immense turn of foot, and class above all else,” D'Amato said. “Those are the qualities I look for in a top-class racehorse. He's one of the most talented horses that I have ever trained.”

Agave Stable's Mark Martinez added, “It's been an exciting journey these past two years watching Ransom showcase his speed on the dirt, but we are incredibly excited to watch him write the next chapter in his book while standing stud at the storied Calumet Farm.”

Ransom the Moon is out of stakes-winning and graded stakes-placed Count to Three (Red Ransom), who in turn is out of Grade I winner Countus In (Dancing Court).

“He is beautiful, and if he replicates himself we are set,” Knelman said. “He is about 16.2 and has a beautiful neck and top line with a strong hip and hind leg. Looking at his profile, He looks like a Classic-distance horse, but he has the speed to win at six furlongs.”