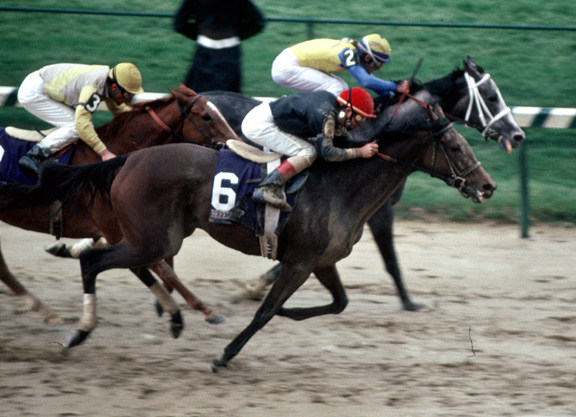 Randy Romero, the strong-willed Louisiana jockey who parlayed “Ragin’ Cajun” fearlessness as a bush-track phenom into a Hall-of-Fame career highlighted by a gentlemanly demeanor and dramatic victories aboard championship distaffers, died peacefully just after midnight on Aug. 29 at his home in Louisiana. He was 61 years old. The Jockeys’ Guild confirmed his death.

Romero’s deft, sure-handed horsebacking skills were eclipsed only by his reputation for having rock-solid spiritual faith in the face of numerous on- and off-track adversities. For decades he courageously battled liver and kidney troubles. In mid-June of 2019 Romero disclosed that he was receiving hospice care after doctors deemed him too weak to undergo further surgeries.

Eddie Donnally, a retired jockey who is now an ordained minister, told TDN via email that he visited Romero last week, and that fellow Cajun jockeys Mark Guidry and Eddie Delahoussaye had also been at Romero’s home to be with him in his final days. He added that Romero’s older brother, Edward, became Randy’s caretaker after he began hospice care, and that Romero was surrounded by family members when he died.

“He fought so hard and so long and it took him a long time to find peace,” said Edward Romero. “But in the end he died in peace and had a peaceful look on his face. We’re all sad, but we didn’t want to see him suffer any longer and we know he is in a better place.”

With a reputation for being a hard-driven but fair competitor, Romero rode 4,294 winners while earning $75 million in purses in a career that spanned 26 years. He was best known for getting the most out of top-notch fillies and mares. Romero piloted Sacahuista (Raja Baba) to win the 1987 GI Breeders’ Cup Distaff, then came back the next year to capture that same race in thrilling, come-from-behind fashion aboard Personal Ensign (Private Account), crowning her undefeated 13-for-13 career with style and panache.

But while that famous Personal Ensign–Winning Colors (Caro {Ire}) stretch battle in the 1988 Distaff remains one of the most exciting photo finishes in the history of the sport, two years later Romero would have a more somber role in one of the game’s most tragic race endings.

Romero had been the regular rider for the 1989 2-year-old filly champion Go for Wand (Deputy Minister). In the 1990 Distaff, she was locked in a tenacious stretch duel with Bayakoa (Arg) (Consultant’s Bid) that had the makings of another high-drama finish. But at the Belmont Park sixteenth pole, Go for Wand took a bad step and crashed to the ground with a cannon bone fracture. A dazed Romero, lifted off the track on a backboard while Go for Wand was euthanized, didn’t even know he had broken eight ribs in the spill, and he insisted on honoring his call in the final race of the day, the GI Breeders’ Cup Classic.

The way Romero bounced back from that devastating accident on national TV–he would ride for nearly another decade, ending with 21 separate riding titles at tracks all across the country–underscored a lifelong resiliency that became his most enduring and admirable characteristic.

But decades later, Romero would disclose in the book “Randy Romero’s Remarkable Ride,” by Bill Heller, that his childhood was far different than what was depicted in the film. Romero said he and his brothers suffered verbal and physical abuse at the hands of his father, and that he used horses and the racetrack as a means of escape (father and son would later reconcile before the elder Romero died in 2015).

As soon as he was legally old enough, at 16 in 1973, Romero rode his first pari-mutuel race at Evangeline Downs. He quickly rose through the ranks on the Louisiana circuit.

By 1983, Romero was in demand for out-of-town stakes mounts. One such trip took him to Oaklawn Park. In an attempt to reduce weight, he entered a box-style sauna after being rubbed down with isopropyl alcohol. A heat bulb burst and Romero was consumed by flames. He suffered burns over 60% of his body and, while receiving blood transfusions to aid with skin grafting, Romero said he accidentally was given donor blood tainted with hepatitis C, which badly damaged his liver.

It took seven months for Romero to recover. When he resumed riding, he established a Fair Grounds record for the meet with 181 wins.

Romero would also win riding titles at Belmont, Keeneland, Gulfstream, Hialeah, Arlington, Louisiana Downs, Delta Downs and Jefferson Downs. On three separate occasions he won six races in one day. At Gulfstream Park in 1988–in the era prior to the “stacking” of graded races on big days–he became the first jockey to win four stakes on a single Gulfstream program, including the GI Florida Derby aboard Brian’s Time (Roberto).

Although Romero had already decided to retire in 1999 while riding stakes-caliber horses at Churchill Downs, he insisted that his final appearance in the saddle be at Evangeline, where the track organized a last-hurrah competition among Romero and seven other jockeys who also got their starts in Cajun country.

“I wanted to give something back to the people of Acadiana and Evangeline Downs,” Romero said before riding in his career finale. “I think they deserve it.”

Romero, in various published interviews over the years, said he eventually lost count of all the injuries he sustained on horseback. He once put the number of serious accidents at around 35, and the number of surgeries needed to correct them north of 25.

Ill health effects from a lifetime of having to purge weight followed him into retirement.

Up until his death, Romero had been outspoken about the need for the industry to raise minimum weight requirements for jockeys.

Romero was elected to the Louisiana Sports Hall of Fame in 2005. It took him eight years of ballot eligibility, but in 2010 he was finally voted into the National Museum of Racing’s Hall of Fame.

“I know it took a long time, but maybe things taste better when they take a long time,” an emotional Romero said upon learning of his induction.

In 2011, an HRTV-produced documentary about the ups and downs of his life, “Inside Information: Randy Romero,” won the Media Eclipse Award in the Television-Features programming category.

Romero had a kidney removed in 2008 but kept alternating workouts at a gym with dialysis treatments so he could remain in decent enough shape to receive a long-awaited liver and/or kidney transplant. But in 2015, doctors discovered a marble-sized tumor in Romero’s stomach that had to be taken care of before any transplants could be considered. Under the circumstances, he was given a year to live.

“I’m gonna beat this,” Romero told a New Orleans newspaper at that time. “I’ve had a great life, and I’m very fortunate to be here. What can I say? I chose a tough game.”

Romero never received the transplants. But he did end up outliving his doctors’ grim prediction by four years, which might have been his biggest against-the-odds accomplishment.

Even in his weakened state, Romero made it a point to attend the 2018 Jockeys and Jeans Fundraiser for the Permanently Disabled Jockeys’ Fund at Canterbury Park. According to Donnally, he took the time to speak personally with each of the six permanently disabled riders who were on hand that day.

“Randy ignored his own health issues, got on a plane and attended even though he had find a place and undergo dialysis while he was there,” said Donnally, a long-time friend and Vice President of Jockeys and Jeans. “He took the time to talk with each of the six permanently disabled riders there to be honored. Randy was as kind as he was brave.”

Donnally said that tentative funeral plans call for Romero to be cremated, and a Catholic Mass service will be held at Our Lady of Lourdes Church in Romero’s hometown of Erath, likely on Tuesday, Sept. 10, at 1:00 p.m. The family is requesting that in lieu of flowers, donations honoring Romero can be made in his name to the Permanently Disabled Jockeys Fund (online donation portal here).