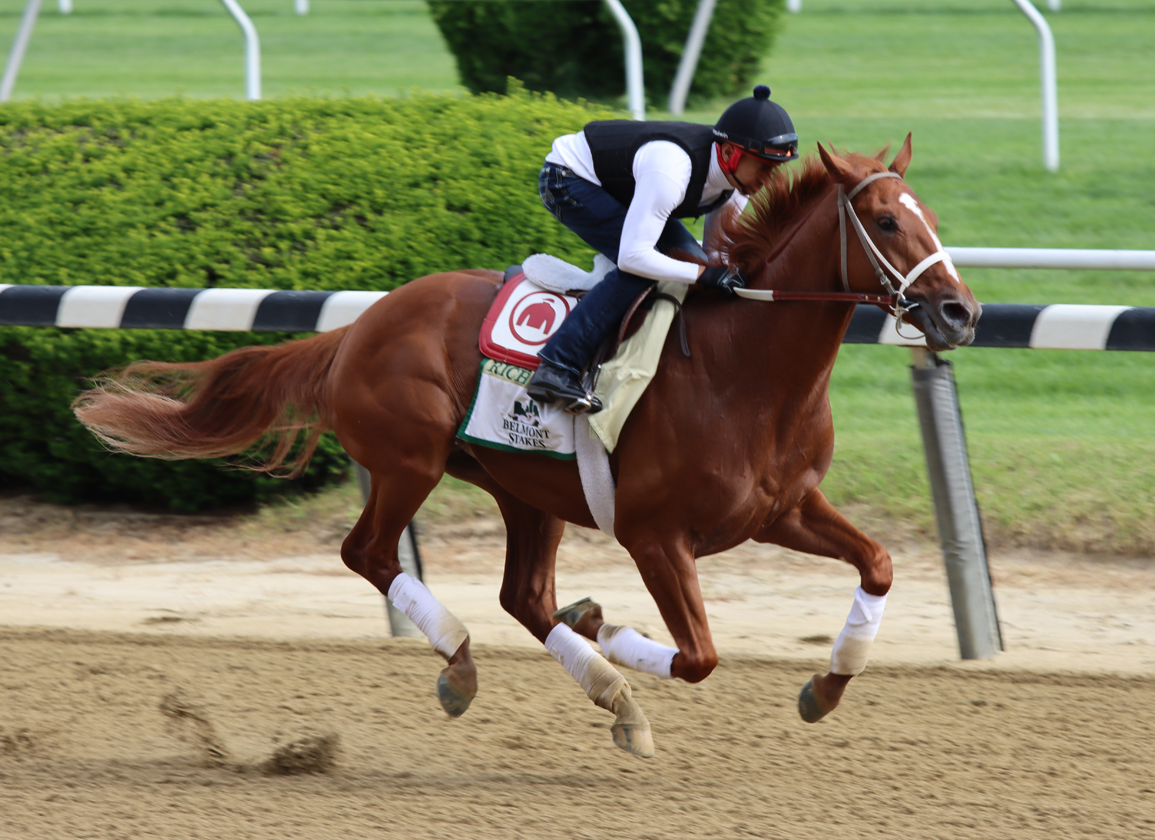 The historic, come-from-behind 80-1 Derby upsetter heads to the final leg of the Triple Crown fresh after breaking the norm and skipping the GI Preakness S. He has been installed as the third choice on the morning line at odds of 7-2.

The $30,000 claim-to-fame will attempt to be the first non-Triple Crown winner to capture both the Kentucky Derby and Belmont since Thunder Gulch (Gulch) in 1995.

“He's doing really good since he's been here, he's training better every day,” trainer Eric Reed, seated alongside owner Richard Dawson, said at Tuesday's well-attended post-position draw from Belmont's Triple Crown Lounge. “I don't think the pace will be nearly as fast. He's still probably going to drop back, that's just his style of running. Turning for home, if he's close enough, he'll have a real good shot at it. It's definitely not a race where you want to come from way, way back. But we've tried a couple of times to get him going early and it didn't work.”

The pace of the 1 1/2-mile Classic is expected to come from the rail-drawn, 2-1 morning-line favorite 'TDN Rising Star' We the People (Constitution), a runaway, front-running winner in a sloppy renewal of the local prep GIII Peter Pan S.

With some wet weather in the weekend forecast, any chance we see trainer Rodolphe Brisset doing a rain dance?

“I'm a bad dancer,” Brisset responded to NYRA's Andy Serling to plenty of laughs. “Obviously, if it ends up raining, we won't be sad by it. But if it stays dry, we'll be fine, too.”

Tonalist (Tapit) is the last to pull off the Peter Pan-Belmont S. double in 2014. Peter Pan runner-up Sir Winston (Awesome Again) followed up to bring home the white carnations in 2019.

Just as he did with Belmont S. winner Creator (Tapit) prior to the 2016 renewal, celebrity chef Bobby Flay joined the ownership line of WinStar Farm, CMNWLTH and Siena Farm on Monday, acquiring an undisclosed interest in We the People.

Hall of Fame trainer Todd Pletcher will have two chances at collecting a fourth Belmont trophy.

Donegal Racing and Repole Stable's Mo Donegal (Uncle Mo) (post six), a rallying fifth from far back with an impossible trip in the Derby, was tabbed as the 5-2 second choice. He previously defeated subsequent GI Preakness S. winner Early Voting (Gun Runner) in dramatic fashion in the GII Wood Memorial S. Empire Maker (Unbridled) was the last to record wins in both the Wood Memorial and Belmont in 2003.

His stablemate Nest (Curlin) (post three), campaigned in partnership by Repole Stable, Eclipse Thoroughbred Partners and Michael House, takes on the boys following a runner-up effort in the GI Kentucky Oaks. Pletcher, of course, trained the brilliant filly Rags to Riches (A.P. Indy) to defeat Nest's sire, the mighty Curlin, in a Belmont S. for the ages in 2007.

Trainer Kenny McPeek, responsible for 2002 70-1 longshot winner Sarava (Wild Again), will saddle lightly raced Creative Minister (Creative Cause) (post five). The gray has created a Triple Crown series of his own this spring, scoring in an optional claimer on the Kentucky Derby undercard May 7 and finishing third at 10-1 in the Preakness, respectively.

From the rail out, the complete field for the 154th GI Belmont S.: