'Rags To Riches' A Case Of You Primed For Turf Sprint 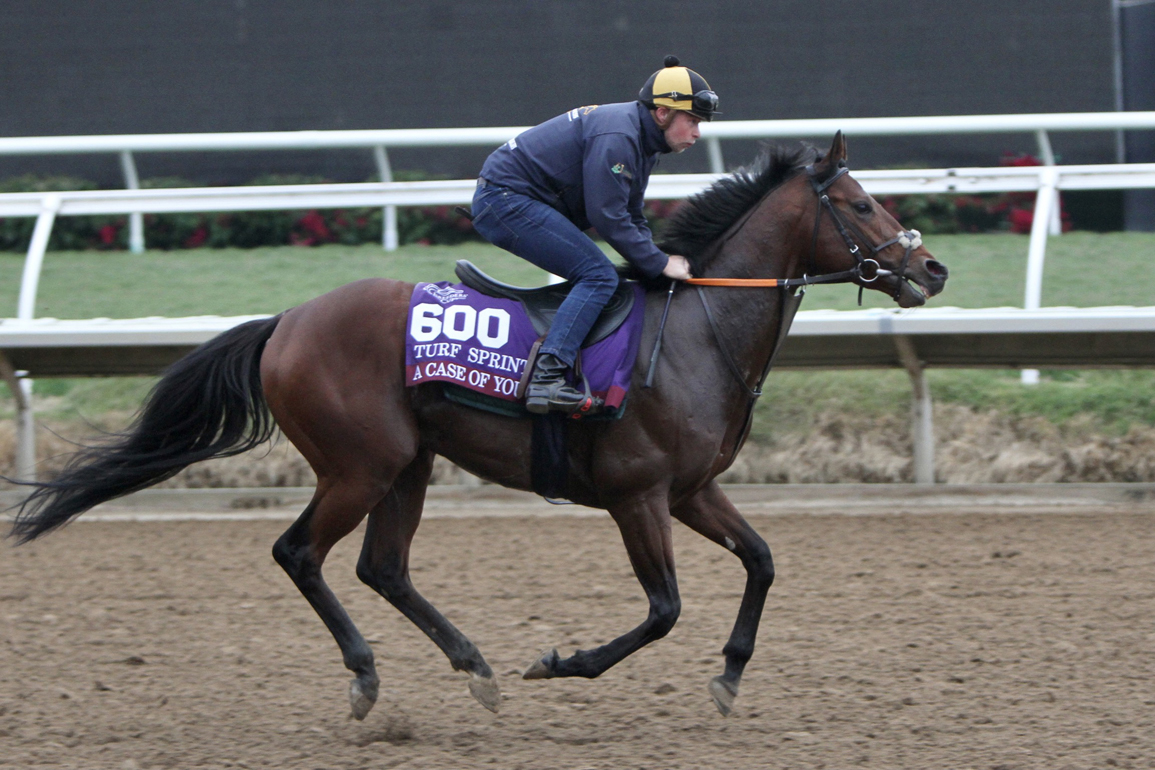 A Case Of You at Del Mar | Horsephotos

Del Mar, CA–The celebration from trainer Ado McGuinness, his family and stable team reverberated far and wide across ParisLongchamp-and, quite possibly, beyond–on Oct. 3 when Gary Devlin's A Case Of You (Ire) (Hot Streak {Ire}) hit the line a short-head winner of the G1 Prix de l'Abbaye. And rightfully: after 21 years training racehorses, McGuinness had won his first Group 1.

“To win your first Group 1 and to win it on one of the biggest days in Europe was very special for everybody involved,” McGuinness said. “[Jockey] Ronan [Whelan] has been riding for me for a long time and to get a Group 1 like that, it was just so special. We can get very vocal sometimes and that's just the way we are no matter what type of winner we have. It was a very special day and something you'll remember for the rest of your life. Words can't really describe what it was like that day. I know what it's like now and hopefully I can experience it again.”

McGuinness could get that chance again on Saturday when he saddles A Case Of You in the GI Breeders' Cup Turf Sprint. Having arrived in Del Mar on Monday evening, McGuinness was trackside on Tuesday morning to supervise his stable star as the 3-year-old went through an easy canter over the dirt course.

“The horse traveled over very well,” McGuinness said. “He had two days in quarantine and he was very fresh [on Monday] morning and he had a go with his rider, but he had a nice canter this morning and he was more laid back. We're really happy that we have a really good draw and hopefully he'll run a nice race for us.”

That draw is six of 12, which McGuinness said gives Whelan options with A Case Of You.

“I think the six is good for him because he might not have the tactical speed really early, so they can jump and go forward and he can just sit right in behind them,” he explained. “I think it's an ideal draw for him that will leave us with two options, so we're very happy. We're a little concerned because it's a round track and it's tight, but he's handled Dundalk, our all-weather surface at home, and it's round so hopefully he'll put up a bold show.”

A Case Of You has been on an upward trend since joining McGuinness last winter, and he is the type of horse that keeps the smaller operator dreaming. Bought for 950gns as a foal by trainer John McConnell, A Case Of You failed to find a new home at the Goffs Sportsmans yearling sale of 2019, and was led out unsold at €3,000. When McConnell sent A Case Of You to the races in his own colours, it became immediately apparent that the horse had been far undervalued. Third first out at Bellewstown last August going a mile over heavy ground, A Case Of You promptly graduated next out when dropped down to seven furlongs at Down Royal before posting a minor upset when coming home the 6-1 winner of The Curragh's G3 Anglesey S. A Case Of You was then due to be sold to Hong Kong, but when that deal fell through, McGuinness swooped.

“We were looking for a horse at the end of the year and this horse was to be sold to Hong Kong, but the deal fell through so we went looking for him,” the trainer recalled. “We brokered the deal for him just before Christmas. It was a long time trying to get him and it was probably the most money I've ever paid for a horse, yet he wasn't expensive; compared to what he has done today, he was a very cheap horse. I think it's onwards and upwards. the horse is just thriving and he's a rags to riches type of horse. He's very talented and it's a privilege to have him.”

A Case Of You's first outing for McGuinness was a win in a Dundalk conditions race going six furlongs, and he trailed home last of 12 when hanging badly in the seven-furlong Listed 2000 Guineas Trial at Leopardstown three weeks later. Dropping back to six, A Case Of You and Whelan took the G3 Lacken S. at Naas, but beat just four home in the G1 Commonwealth Cup, having lost a shoe in running over the heavy ground. After he finished third in the G3 Phoenix Sprint S. again over six furlongs on Aug. 8, McGuinness dropped A Case Of You back to five furlongs for the first time, a move which has transformed the horse. After coming from well out of it to finish second in the G1 Flying Five S. at The Curragh on Sept. 12, A Case Of You made a similar move at ParisLongchamp, sprinting away from the eventual third-placed Glass Slippers (GB) (Dream Ahead) to cut down the lead of Air De Valse (Fr) (Mesnil Des Aigles {Fr}) and hit the line a short head in front. A Case Of You re-opposes the defending Turf Sprint winner Glass Slippers, who he has had behind him his last two outings, at Del Mar.

“The Irish handicapper was sort of knocking him a bit on his two runs, but his first two ever runs over five furlongs were a second in a Group 1 and a win in a Group 1, so you can't get much better than that,” McGuinness said. “If Ronan had ridden him at The Curragh again he might have won the first Group 1 as well, because we were giving him a bit of time. We're learning about him every day, he's still a 3-year-old. It was a hell of a performance and a hell of a ride from Ronan on both days, and I think the second day was a fantastic ride because a lot of people would have given up when the French horse had gone so far clear, but Ronan knew the horse and knew what he could get out of him. It was a world-class ride.”

Today, McGuinness has just shy of 50 horses in his care, and he said the purchase of A Case Of You was part of a plan to focus on upgrading the quality of his stock.

“I'm training 21 years, and the last four or five years we've really upped the ante with regards to trying to buy a better horse,” he explained. “We've won a lot of big sprint handicaps in Ireland and we had our first group race winner last year and we've won two Group 3s since. My cousin Stephen Thorne works for me, he's a Darley Flying Start graduate, and we do a lot of work at the sales and sourcing nice horses in training. We've been lucky with a few yearlings as well that we've bought and we're trying to get more into the yearling market to try to get better owners in. It's not easy in Ireland because it's probably one of the most competitive places in the world to try and train young horses.

“We've definitely upped the ante on our stable the last few years. At the Galway Racing Festival we've won three of the big flat races in the last three years, and it gives us great advertising to try to get more owners into the yard. It's all about getting a better horse into the yard, and we've proved we can train them if we get good horses, so that's what it's all about.”