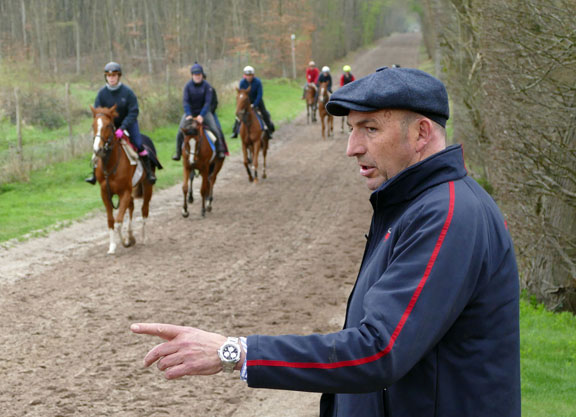 Clement: ‘We all have to understand why they are doing it’ | Emma Berry

With racing in Britain and Ireland continuing behind closed doors, fellow European nations on the continental mainland are now enduring a temporary shutdown of the racing programme in the wake of the coronavirus pandemic.

On Monday, France and Germany became the latest countries to call a halt to racing in the short term, following similar moves by Italy and Spain. France’s President Emmanuel Macron imposed a 15-day lock down on Monday evening, while earlier that afternoon France Galop issued a statement announcing that there would be no racing in France from Mar. 17 until Apr. 15.

It read, “Our top priority is the health of all stakeholders in the industry and compliance with state directives. By suspending all competition, we want first and foremost to protect them from the current pandemic. With this decision, the French horseracing industry also shows its solidarity and responsibility towards the entire nation.

“We are living in exceptional times of unprecedented gravity. We know that we can count on everyone’s commitment to stem the pandemic as quickly as possible; you can also count on our commitment and determination: no one will be abandoned.”

The French racing authority had announced a ‘behind closed doors’ policy for all racecourses in the country only last Friday, including the barring of owners and breeders at tracks. Prior to that, Chantilly and Compiegne racecourses had denied access to racegoers from the first week of March under instructions from the prefecture of the Oise region and the local authorities in Chantilly, which is around 50km north of the centre of Paris.

Nicolas Clement, who trains in Chantilly and is chairman of the French trainers’ association, said, “On Saturday night the government announced the closure of all restaurants, bars and cafes, and that of course affects the PMU betting. Cafes are closing, and though they cannot sell a coffee they can sell cigarettes and a bet, but [on Sunday] the income from betting was affected hugely. I don’t know what’s going to happen with the big announcement tonight but I think there could be a lot more confinement, maybe in Paris or on a national basis. I think the government wants as little movement as possible. I hope they know what they are doing but of course the country is under huge threat and we all have to understand why they are doing it. We just have to hope that we will be able to race again as soon as possible because I don’t know how long the profession can take it if racing is stopped.”

He added, “We have to keep training the horses of course. We don’t know yet if it’s just Paris that will be confined or everyone. At the moment I’m trying to find out from the department of agriculture whether people are able to come to work under special measures for agriculture and animals. But the travel agents are all closed, a lot of banks are closing, there are only food shops open. I’m driving through Chantilly at the moment and it’s like a ghost town. But the government is shutting the country to stop the virus spreading because the hospitals are jammed. They are trying to hold it. And the sooner they get it under control the better because we cannot stop for too long.”

In Germany, racing is suspended until Apr. 18 by order of the Direktorium, which runs German racing and breeding.

One of the country’s leading trainers, Andreas Wohler, who also acts as the representative for the trainers and jockeys on the Direktorium, confirmed on Monday evening, “There was a meeting of the Direktorium today and it has been decided that, following the cancellation of meetings in Cologne last week, there will be no more racing in Germany until after Easter. We don’t even have the option to race in France now as they have also stopped racing. We just have to be patient but it is going to be a very quiet time.”

Italy, the hardest hit by coronavirus of the European nations to date with a death toll in excess of 1,800, was placed in national quarantine on Mar. 9. That included the cancellation of all sporting events until Apr. 3.

Despite the restriction of movement of horses in training, breeding stock can still be moved and Massimo Parri, the head of the Italian Thoroughbred Breeders’ Association, confirmed to TDN that the breeding season is continuing uninterrupted at present.

He said, “The order is in place until 3 April and we don’t know if it will be extended but mares are able to be moved to be covered, though there is no racing taking place.”

Training has continued at Italian centres. Newmarket-based Marco Botti, whose father Alduino trains in Milan and brother Stefano has a stable in Pisa, has been in daily contact with his family in the country. He said, “Milan is the most badly affected city in Italy and at my father’s stable they are still allowed to train the horses but the staff have their temperatures checked every morning when they arrive for work. Where my brother is in Pisa, the situation is not so bad and they are training the horses as usual but with extra precautions for everybody. It is hard to know whether or not they will start racing again after 3 April.”

Spain, too, is now in national lockdown, with racing having been halted since last week. The majority of horses in training in the country are based at Madrid’s La Zarzuela racecourse. Training is still allowed to take place there but horses cannot be moved in or out of the training base.

Spain’s champion trainer Guillermo Arizkorreta, who has a string of around 60 horses in Madrid, told TDN on Monday, “Last Monday in Spain they closed the schools and on Wednesday they told us that they would stop all the sporting events, so that is racing as well. The government didn’t give us a chance to race behind closed doors—they just stopped it. For the moment, racing is officially closed for two weeks but I am pretty sure that it will be a bit longer than that, though we don’t know anything for sure at the moment.”

A statement released on Mar. 13 by La Zarzuela racecourse read, “An exceptional situation has required taking exceptional measures, especially in the Community of Madrid. Hipódromo de la Zarzuela agrees that the days and races that have been postponed so far, those of March 15 and 22, will be rescheduled as soon as possible.”

The racecourse, which races every Sunday in the spring, is scheduled to stage the Spanish 1000 Guineas on Apr. 26, followed by the 2000 Guineas on May 3.

“Hopefully we will be able to run the Classics, but we just don’t know,” Arizkorreta added. “We are still able to train the horses. All the riders are coming in as normal. If someone doesn’t feel well then they have to stay at home, otherwise they are all coming in to work.

“We can’t go to race in France. We’re not even allowed to move the horses away from the racecourse. I thought about sending a couple of 2-year-olds to the field but they won’t let me do that at the moment.”

Outside Madrid, restrictions are not quite so strict. Jose Hormaeche, president of the Spanish Jockey Club, runs one of the country’s largest stud farms, Yeguada Torreduero, some 200kms north-west of the Spanish capital, which stands four stallions including new recruit First Eleven (GB), a Frankel (GB) half-brother to Kingman (GB).

He said, “We have received a couple of mares this week and I spoke this morning to the ministry and they said no problem, that if we need to move horses to go ahead. I am moving some yearlings soon to the north but the situation is changing every day. So far it’s not affecting the breeding season. Most mares are already in the place they need to be so for now we are carrying on as normally as we can.”