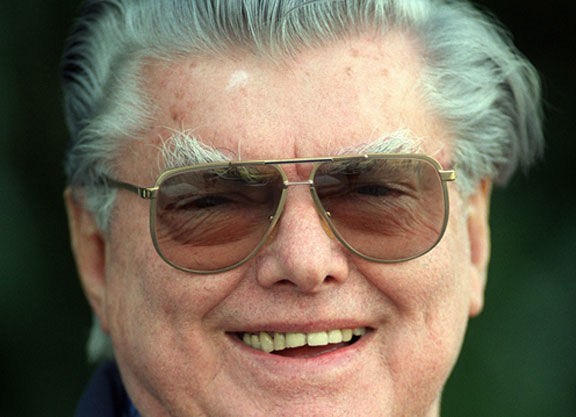 Legendary handler Bart Cummings was remembered as “the shy racehorse trainer destined to become an Australian icon” as he was farewelled with a state funeral in Sydney Monday.

It was a fitting send-off for a man who, despite being allergic to horses and hay, became known as the “Cups King” for his 12 victories in the country’s most storied race, the G1 Melbourne Cup.

A classy, deeply religious affair–simple yet grand–it was reflective of the man being honored. His casket, brown oak with gold fittings, sat at the head of affairs, adorned by two large portraits of the trainer, his 10th Melbourne Cup–won by Saintly (Aus) in 1996–taking pride of place next to the coffin. Cummings bred Saintly and raced him in partnership with Dato Tan Chin Nam.

And much like the race he came to dominate, the funeral stopped a nation, a number of television networks interrupting regular coverage to telecast the service.

The traditional Catholic mass, led by the Archbishop of Sydney Anthony Fisher, was at heart a family occasion. Readings and prayers were given by his children and grandchildren, including his training partner, grandson James, while close friend of more than 50 years Malcolm Wuttke had the congregation in hysterics with a number of witty anecdotes involving missed flights, Hugh Hefner and the Derby at Epsom. (video)

“Bart was revered by Australians of every sort,” Fr Fisher said. “From the cabbies who took him to Flemington and Randwick, to leaders of Government and industry who liked to be seen with him–even, I’m told, Her Majesty the Queen.”

“Dad spent time with kings and queens, prime ministers, premiers and the common man. He treated all equally and gave them time,” said Cummings’ son and fellow trainer Anthony through tears. “There’s always been a bit of larrikin about dad. There was always a bit of fun to be had and it was that, from the early days that drew people to him. As we’d seen all the way through, there hadn’t been a bridle made to hold him back.

“In the end, he was more than a horseman, he was an icon, a legend, all of that; built from flames and hardship to go with success. Bob Hawke described him as a great and good Australian, enough said.” (video)

Perhaps it was appropriate, then, that the Australian national anthem, Advance Australia Fair, rung out as one of the early hymns. It was an odd ode, but one which no doubt would have left Cummings–a patriot whose green and gold stable colours were a nod to Australia’s national colours–with a wry smile.

Among the mourners were five jockeys who rode Melbourne Cup winners for Cummings: J J Miller, Darren Beadman, Steven King, John Marshall and Blake Shinn, as well as the first lady of Australian racing, Gai Waterhouse, whose father T. J. Smith was Cummings’ main rival through the 1970s and 1980s.

But chief among those in attendance was Cummings’ wife Valmae, wheelchair-bound but stoic as ever. The devoted couple celebrated their 61st wedding anniversary two days before his death.

As the service came to a close, the bells of St Mary’s Cathedral tolled loudly across Sydney–once for each of his 87 years–while Australia’s normally-raucous parliament in Canberra came to a standstill for a minute’s silence.

Cummings died of pneumonia surrounded by his family at his Princes Farm property on the outskirts of Sydney Aug. 30.