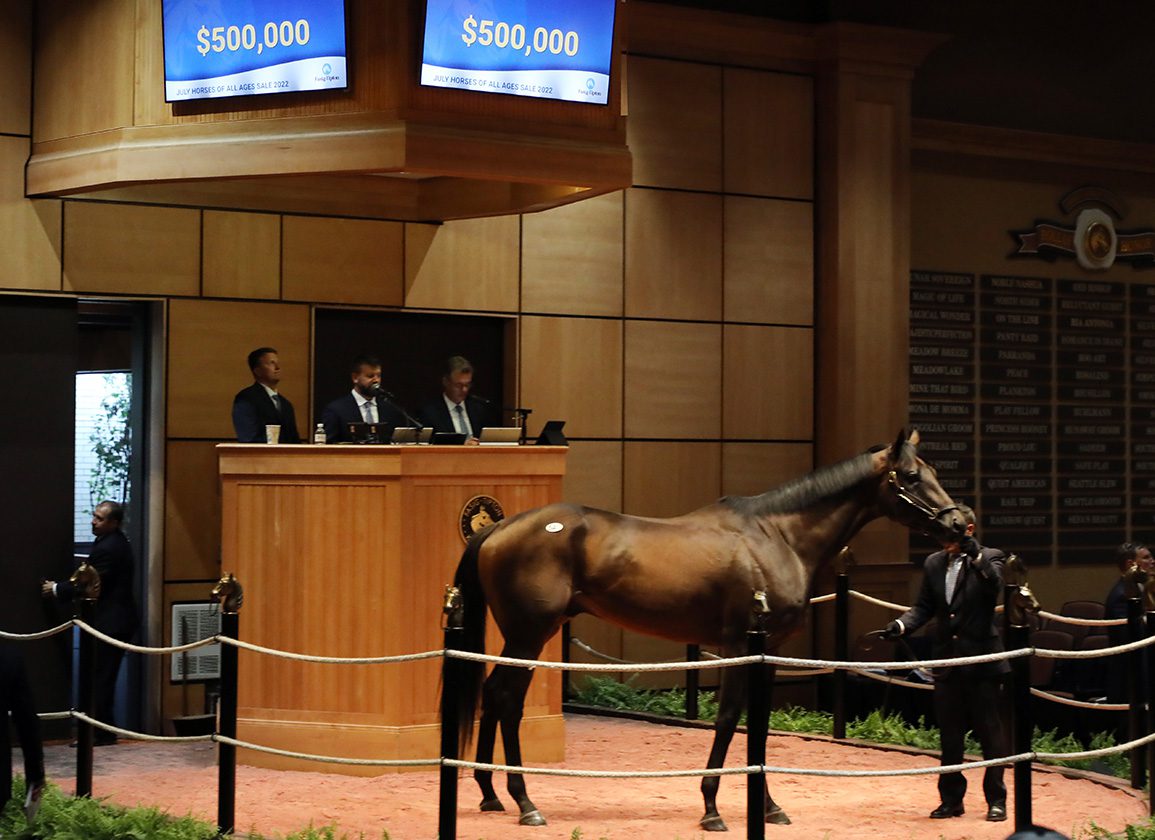 Sale-topping Kuchar in the ring | Fasig-Tipton

LEXINGTON, KY – The Fasig-Tipton July Selected Horses of All Ages Sale, marking its 10th edition, confirmed its importance on the calendar with a strong renewal at Newtown Paddocks Monday.

“It was a tremendous sale tonight,” said Fasig-Tipton President Boyd Browning, Jr. “It was even stronger than we anticipated. We saw an unbelievable depth of bidding activity tonight. We had activity from the East Coast, West Coast, international participation. It was very encouraging. It was a very strong marketplace overall.”

As expected with boutique summer meets at Del Mar and Saratoga upcoming, horses with current form proved popular in the sales ring Monday. Bloodstock agent Steve Young purchased the day's top-priced offering Kuchar (Uncle Mo) for $500,000. The 3-year-old, consigned by WinStar Racing, was coming off a runner-up effort in the July 2 American Derby.

“I think it is like any other horses of racing age sale,” said Young, who purchased two of the day's three top lots. “You look at them after the fact and some of them appear to be a lot more than what you would foresee. But, with the purses the way they are in places like Kentucky and New York, horses that are running are worth a lot of money.”

Browning agreed horses who could go on and race at summer meets at Saratoga and Del Mar were in demand.

“There is a lot of demand for a horse that can ship to Saratoga and run next week,” Browning said. “Several horses will ship to Del Mar. A lot of horses will be re-strategized to regional racetracks.”

Bloodstock agent Steve Young, active throughout Monday's auction, made the day's highest bid when going to $500,000 to acquire recent American Derby runner-up Kuchar (Uncle Mo) (hip 547) on behalf of an undisclosed client. Agent Jacob West was underbidder on the colt.

Of the colt's final price tag, Young said, “That's what horses of his nature cost. If you try to buy them on the private market, that's what they are going to want for them.”

Racing for WinStar Farm and Siena Farm and trained by Rodolphe Brisset, Kuchar was a maiden winner at Oaklawn in March. He was second in the Apr. 23 Oaklawn S. before winning a Churchill allowance May 22. He was most recently second behind Rattle N Roll (Connect) in the July 2 American Derby.

Bred by WinStar Farm and consigned by WinStar Racing, the bay colt is out of multiple Grade I-placed Street Girl (Street Hero).

“We are selling horses like him and he was our best one coming in here after running second in the American Derby,” said WinStar's Elliott Walden. “He is a beautiful horse and he had the right people on him.”

WinStar had a profitable day in the sale ring Monday. The operation also sold the day's second-highest priced offering, Chilean Group 1 winner First Constitution (Chi) (Constitution) (hip 587) for $430,000. The 5-year-old, campaigned by Don Alberto Stable, WinStar and Twin Creeks Racing Stables, was a two-time stakes winner in New York this spring and he is coming off a fifth-place effort in the June 11 GII Brooklyn S. He was purchased via a phone bid from RRR Racing, which also campaigns this year's G1 Dubai Golden Shaheen winner Switzerland (Speightstown). @JessMartiniTDN

Diamond Hands (Frosted) (hip 495), runner-up behind Pizza Bianca (Fastnet Rock {Aus}) in the May 20 Hilltop S. for Rob Masiello and Steve Rocco and trainer Christophe Clement, will continue her racing career on the New York circuit after bloodstock agent Steve Young purchased the 3-year-old filly for $375,000 on behalf of an undisclosed client Monday at Fasig-Tipton.

“She is a wonderful filly,” Young said. “I tried to buy her as a 2-year-old in training. I got outbid there. She has picked some tough horses to run against. She is lightly raced and I think she has a lot of blue sky ahead of her if she is brave and lucky. She ran good against Haughty. She ran good against Pizza Bianca. We are very happy to get her.”

Diamond Hands broke her maiden over the Belmont lawn in November and opened her 3-year-old campaign with a runner-up effort behind GI Breeders' Cup Juvenile Fillies Turf winner Pizza Bianca in the May 20 Hilltop S. She has hit the board in four of five lifetime starts and earned $103,180 to date.

Joe Migliore purchased Diamond Hands for $425,000 on behalf of Masiello and Rocco at last year's OBS April sale. The filly was one of the first Migliore signed for when he went out on his own last year and the bloodstock agent was on hand to watch her sell Monday in Lexington.

“She is a very nice filly,” Migliore said. “I absolutely loved her at the 2-year-old sale and she has done great for us. Sometimes in this game you have to trade. We just felt like it was a good time to put her through this sale. Obviously, Fasig does such a great job with this sale and getting good money for strong racing prospects and that's what she is. I certainly think she is a stakes winner down the line. It was great to get her black type in the Hilltop behind Pizza Bianca. I am sure we will see more from her for her new connections.”

Out of multiple stakes winner Love Cove (Not For Love), Diamond Hands is a half to stakes winner Bibby (Stormy Atlantic). Her dam is a half-sister to graded winner Sweet Vendetta (Stephen Got Even). She was consigned to Monday's sale by Denali Stud. @JessMartiniTDN

Song Parody (Practical Joke) (Hip 609) was a late supplement to Monday's sale and it proved to be a wise move when she brought $360,000 from Runnymede's Romain Malhouitre.

“It is going to be a partnership between Runnymede, a New York owner and a group of Boston people,” Malhouitre said. “She will go to New York. I am looking for a New York trainer.”

As for the price, he said, “Today was a strong market. We wanted her for a little bit less, but I was full speed.”

A $25,000 OBS October acquisition, Song Parody went wire to wire in her debut against fellow New York-breds June 25 at Belmont, graduating by 5 1/2 lengths and earning a 73 Beyer Speed Figure. Her SP dam Songofthecity (Songandaprayer) is a half-sister to MGISW Midnight Lucky (Midnight Lute). This is also the family of Grade I winner Hookedonthefeelin, dam of MGISW Pussycat Doll and GISW sire Jimmy Creed.

“She is well put together,” Malhouitre said. “It is a good mix between the sire and Songandaprayer as well. I thought she had a lot of class. Obviously, she was very fast first time out. We are hoping she can carry her speed.”

When asked if the long-term plan for the filly was to join the Runnymeded broodmare band, Malhouitre said, “Runnymede is a breeding operation. She fits the box for us. We take a lot of pride in doing a little bit of everything. We have a good program for turf and we were looking for a fast, precocious filly on the dirt and she showed that.” —@CDeBernardisTDN

The stallion-making partnership of SF Bloodstock, Starlight Racing and Madaket was among the leading buyers of yearlings last year and just as the calendar is about to turn to the yearling sales once again, the group was in action as sellers Monday at Fasig-Tipton. They sold multiple stakes-placed Montebello (Curlin) (hip 565) to bloodstock agent Steve Young and a few hips later multiple graded winner Newgrange (Violence) (hip 568) to Rockingham Ranch for matching $325,000 price tags.

“The timing was right to sell them,” SF Bloodstock's Tom Ryan said of the decision to send the two 3-year-olds through the sales ring. “Montebello and Newgrange are two lightly-raced colts that have lots of racing in front of them. We felt it's the time of the year where we are working on replenishing our budget to go to work again in Saratoga and on into the fall.”

Ryan continued, “Fasig-Tipton is a fantastic facility to show these horses. The show rings here are just fabulous. And it's a welcoming, wonderful team over here. Boyd [Browning] put this sale on the calendar 10 years ago and it's become a good place to bring these horses.”

Asked if he expected the partnership to be as active this year, Ryan said, “We have a wonderful group assembled and we expect to be active for sure. We will be out there working in force and doing what we can.”

Both colts were consigned Monday by Elite Sales.

“I want to give the team at Elite Sales a lot of credit,” Ryan said. “Liz [Crow], Katelyn [Jackson] and Brad [Weisbord] do a great job and they have a great network of clients. People enjoy buying from them. With their passports, Elite make it so easy for the buyers. They do all the work for the buyers.”

Montebello, purchased for $400,000 at the 2020 Keeneland September sale, was a first-out winner at Del Mar last August and was second in the 2021 Funny Cide S. and Capote S. He most recently captured a June 30 Belmont allowance.

“He's a nice horse,” said Young. “I liked him as a 2-year-old. He was good enough to win at Del Mar against open horses. He was dead game the other day to win in New York. With the purses for New York-breds [being high], he still has all of his conditions.”

“We are going to send him to Del Mar and we are going to try him on the turf,” said bloodstock agent Kim Lloyd, who signed the ticket on the colt on behalf of Gary Hartunian's Rockingham Ranch. “The Violences like turf. He is just a great-looking horse. He's game and a very impressive colt. He's had time off. He's fresh. He's sound as new money.” @JessMartiniTDN

The 2-year-old filly Buttons (Twirling Candy) (Hip 474) is headed to the barn of trainer Joe Sharp after being purchased by Clark Shepherd, acting on behalf of owner Larry Hirsch, for $275,000 Monday.

The bay is a half-sister to GIII Forward Gal S. winner Girl With A Dream (Practical Joke) and her dam is a half to GSW & MGISP Mr. Commons (Artie Schiller). She won her debut at Horseshoe Indianapolis June 28 for trainer Rusty Arnold.

“She is just a great filly,” said Shepherd. “She is just two years old and she's only had one race, so she hasn't been chewed up too badly yet. She's a brand name and is a half to a graded stakes winner. She has a ready-made page, so anything she adds to that from this point forward is going to be icing on the cake. I like Twirling Candy, but physically they are not my favorite. But, she is one of the best Twirling Candys I've ever laid eyes on.”

“She's a really nice athletic filly,” Sharp added. “She has a lot of upside. We might go to Kentucky Downs with her. They have nice 2-year-old opportunities for the fillies. She has her whole future ahead of her.”

Buttons was a $110,000 KEESEP yearling buy for the Dew Sweepers, a new pinhooking partnership that focused on buying yearlings to go to Royal Ascot as 2-year-olds. The plan for the group was always to disperse of all their stock at Fasig July and their seven-horse draft was handled by Grovendale Sales.

“I think that was pretty fair,” said Grovendale's Chance Timm. “It was a bit more than we expected. But she is an active runner that showed good form, so she probably deserved to bring more than expected.”

The other members of the Dew Sweepers dispersal were: