Racing Has a New Home In St. Lucia 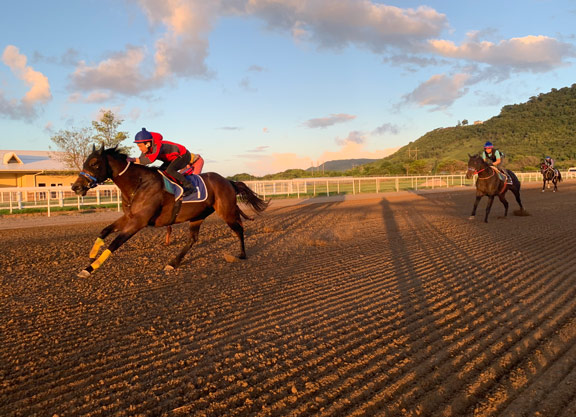 VIEUX FORT, ST. LUCIA–One of the many wonderful aspects of horse racing is that it is a traveling circus of sorts that takes us to some amazing places around the world. Those of us in the industry that spend the majority of our time bouncing from major sales to top racing venues know that even if we make the trip alone, we will find a few familiar faces when we arrive at the next stop. Starting Friday, we will have a new hub on our international rotation when the Royal St. Lucia Turf Club officially opens its doors with a four-race card highlighted by the $150,000 Pitons Cup.

When I reached the lobby of the Coconut Bay Hotel at 6:45 a.m. to catch a ride to the track for morning training, I was greeted by several familiar faces, including Andrew Chesser of The Jockey Club, Dr. Jeff Burke and European racing journalists. We arrived at the track a few minutes later to find Frank Taylor of Taylor Made standing at the rail, observing his Pitons Cup contender Casting Crowns (Warrior's Reward) as he galloped down the stretch.

“[Chief Integrity Officer and chief steward] David Loregnard contacted me about two years ago about having a satellite string here, so I said, 'Of course,'” Nunes said. “Then I met [RSLTC Director] Eden Harrington and, if you know Eden, he can sell ice to an eskimo. He convinced me this was the right thing to do and kept following up.”

The conditioner continued, “Six weeks ago, I came to look at the facility and I thought this was a first world facility in a third world country. We really think that in five years St. Lucia will really be the Pearl of the Caribbean as they call it. If it gets the proper support, it will be exactly that.”

One of Nunes' Pitons Cup contenders Oriental Crown caught the eye as he put in a strong gallop beneath the unusually overcast skies, which provided comfortable temperatures and relief from the strong Caribbean sun. Another standout during Thursday's preparations was the imposing K Kash (Kennedy), a hulking bay who showed good energy during his morning exercise and won six times during his American career. Representing American slotholders Sol Kumin of Madaket Stables, trainer Todd Pletcher and Brad Weisbord's Elite Sales, the 5-year-old gelding is trained by Barbados conditioner Robert Peirce, who is joined by his wife Rosette Peirce, CEO of the Barbados Turf Club.

“I think it is a really good thing they are doing here,” Peirce said. “It is a very nice track and I can see the future. I have been in horse racing my whole life and I can see, once everything goes according to plan, it will be really good and I want to be part of it.”

In addition to K Kash, Peirce also sends out Donna's True Bling (Yes It's True) in Friday's main event for slot holder Dan Schafer, as well as two fillies in the Helen of the West S.

“The slot holders asked me to train their horses, so I brought my staff here and it is really working well,” Perice said. “I started with K Kash about a month ago and he has been doing really, really well. I had another horse that got sick, so they gave me Donna's True Bling to replace him. I have only had her a couple of weeks, but she is doing well.”

The Pitons Cup will be run at 1800m and is the final race of the day Friday. The card opens with the 1400m Helen of the West S., which is comprised of 3-year-old first time starters. Each slot holder from the Pitons Cup was gifted one of these sophomore maidens and given entry into this race with the hope being they would keep their new entity in St. Lucia to race. Next up will be the 1400m Keeneland National Day Sprint as Dec. 13 is St. Lucia's National Day, an important holiday in the country.

The third race on the card, the 1200m Winston Trim Memorial Trophy, is also one of significance to the local people as it is named in honor of St. Lucian horseman Winston Trim, whose lifelong dream was to bring horse racing to his native land. Trim spearheaded the initiation of this project, including bringing Teo Ah Khing and his team to the island. Unfortunately Trim died in a motorcycle accident in March of 2017, so he will not be there to see his dream become a reality, but his presence will be heavily felt on the day and his family will be on hand to soak in their loved one's historic achievement.

Members of the international racing community will get a sneak peak of the set up at the Royal St. Lucia Turf Club Thursday evening with a one-hour investment seminar, followed by a “Taste of the World” themed welcome party. The opening day of the Royal St. Lucia Turf Club will be streamed live on their website Friday, as well as their Facebook page, including pre and post-race analysis.