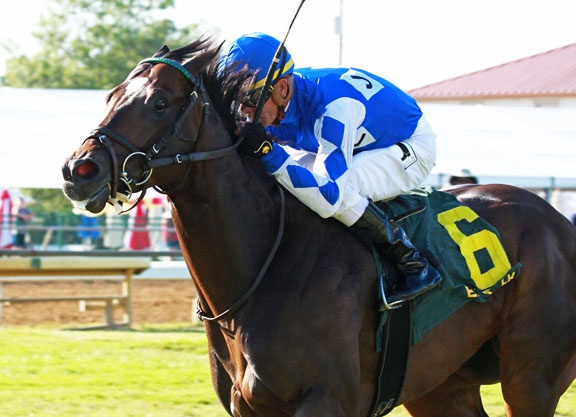 Marzo Could Pay Dividends for Detampel

Marc Detampel, who has been an active player buying at horses-of-racing-age sales in recent years, will be looking to capitalize on a timely investment when he sends graded stakes placed Marzo (Medaglia d'Oro) (hip 397E) through the sales ring as part of the Hunter Valley Farm consignment Monday in Lexington.

Marzo is a son of stakes-winner Spring Party (Smart Strike), a half-sister to Grade I winner Emcee (Unbridled's Song) and to the dam of Constitution (Tapit). A $1-million Keeneland September purchase in 2016, the dark bay made just two starts and was well-beaten in both in the fall of 2017. He went through the sales ring at last year's Fasig-Tipton July Horses-of-Racing Age-Sale and was purchased by Detampel for $35,000.

“I buy a number of horses out of these horses-of-all-ages sales,” Detampel said. “We look for horses that we think we can improve, either by gelding them or by adding blinkers, so they have some potential. In general, we are looking for horses that have only made a few starts. Once they've made eight, 10, 12 starts, they kind of are what they are. When they've only made a couple, you still don't know what they can be.”

Marzo, gelded after his purchase last July, broke his maiden over the turf at Ellis Park in September in his first start for Detampel. He hinted at more to come with a third-place effort over a yielding Churchill turf in the Nov. 10 GIII Commonwealth Turf S. and a runner-up effort in the off-turf Woodchopper S. at Fair Grounds Dec. 29.

“With Marzo we saw a horse who could potentially run on any surface,” Detampel explained. “We thought he had the versatility, which he certainly has. You can enter him on the turf and, if it comes off, you feel fine. Especially when you are racing down in New Orleans in the winter, it's nice to have those horses who can run on the off track as well.”

Of the decision to supplement Marzo to the January sale, Detampel said, “Marzo has exceeded our expectations. We bought him at the right price and now we have a chance to take some money off the table. I certainly buy and sell a lot and my stable turns over quite a bit from year to year–Fergus Galvin from Hunter Valley really is my guy and makes a lot of the buying and selling decisions. We buy a lot out of those sales and we see what those racehorses go for. This is one where we thought we can take a nice profit.”

Detampel, a Chicago-based managing director at the consulting firm A&M, first became involved in racing some eight years ago.

“My neighbor, John Wade, owns a part of Hunter Valley Farm,” Detampel said. “I was talking to him and I became curious as he was talking about it. I started to go to Lexington and to Hunter Valley with him and he introduced me to Fergus. I became good friends with Fergus and he became a mentor, a guy who guided me in racing, and still does. I just fell in love with it.”

Over the years, Detampel's racing stable, which currently numbers some 20 head, has evolved.

“When I started, I was claiming horses,” he said. “I loved the action, I loved to have horses running. And claiming was a quick way to get in the game. You claim a horse, you can run it in two or three weeks. But as I got into it more and was doing more claiming, you also realize half the horses either have a throat issue or a chip in the knee, a chip in the ankle–obviously you don't get to vet them before you claim them. Even if the horse looks good on form, it's just a roll of the dice if you're getting a sound horse with a good throat. So I thought it was time to get out of the heavy claiming.

Detampel continued, “At the racing sale, you can vet and you can really look at the horse. So that became a more attractive option.”

In the last two years, Detampel has become more active in the yearling market.

“If you buy a yearling with a good pedigree, anything is possible,” Detampel said. “In terms of upgrading the quality of your stable, yearlings give you more upside than claiming horses, who have the advantage that you can run them right away and have a lot of action. So it's been just a shift in philosophy.”

Asked about his involvement beyond the racetrack, Detampel said, “I do pinhook, mainly yearlings to 2-year-olds. I have a Liam's Map right now with David Scanlon. On the breeding side, Hunter Valley is obviously huge into broodmares and I get involved a little bit with that. I'm involved mainly through buying fillies with really good pedigrees that have residual value as broodmares, buying a yearling or a 2-year-old filly, racing her, and then at some point selling her in foal.”

As someone who is active buying racing prospects himself, Detampel thinks Marzo will have plenty of appeal to potential buyers at Keeneland.

“I think two things really stand out with Marzo,” Detampel said. “Number one, he can run on any surface. That gives you a lot of flexibility. And number two, he has finished second quite a bit and has all his conditions. So he's running good numbers, he has his conditions, shows he can compete at the stakes level and has had a couple tough seconds. If I'm looking to buy, I am thinking that's great. I want to see a horse that has lost by a neck or a length, rather than winning by a neck or a length, because he still has those conditions. Marzo still has his 1X condition, which, looking at his form, you have to feel like he is going to knock off his 1X whenever you want to go for that condition.”

Chapman to Test Market with Heartwood

When trainer James Chapman purchased Heartwood (Tapit) (hip 795) for $75,000 at the 2017 Fasig-Tipton July Horses-of-Racing-Age Sale, the well-bred gray had a Churchill maiden win to his credit from five trips to the post. Running in the colors of Chapman and Stuart Tsujimoto since then, the now-5-year-old entire is a multiple stakes winner and multiple graded stakes placed. He will go through the Keeneland January sales ring off a runner-up effort in the Nov. 22 GIII Fall Highweight H. and a third-place finish in the Dec. 22 GIII Mr. Prospector S. at Gulfstream Park.

“He was just a really good-looking horse who looked like he had a lot of potential,” Chapman said of Heartwood's appeal in the summer of 2017. “He always, from when I first got him, showed he was going to be a nice horse. He's just gotten better and better.”

Heartwood, a $500,000 weanling at the 2014 Fasig-Tipton November sale, is a son of multiple stakes winner and graded stakes placed Maple Forest (Forestry).

“He is there, but we're not going to give him away,” Chapman said of Heartwood's January engagement. “He's there to see if he brings decent money. If he does, he'll find a new home. If not, we'll just keep going on with him.”

Chapman will also offer War Ballad (Declaration of War) (hip 603) through the Stuart Morris consignment at Keeneland next week. The 3-year-old filly, who RNA'd for $5,000 at the 2017 Fasig-Tipton Turf Yearling Sale, is a two-time winner and a granddaughter of multiple graded stakes winner Miraculous Miss (Mr. Greeley).

“She's a really nice, well-bred filly who should be a really nice 3-year-old,” Chapman said of the dark bay. “We bought her at a nice price and she's done well for us, so we're just moving her on.”

“Keeneland does a really good job with the sale,” Chapman said. “It's nice because I do this for a living. So it's nice to have ways to move money around.”

Chapman, who trained two-time G1 Dubai Golden Shaheen winner Caller One (Phone Trick), is now based in Lexington and, while he has 40 horses in training, his operation isn't limited to racing.

“We do everything,” he said. “We do babies–the 2-year-old thing has gotten a little bit dicey–but we buy weanlings to yearlings and run horses. We do whatever, but I try not to breed. When you can go to Keeneland and buy those nice horses for reasonable prices, less than the stud fees, I try to not breed.”

The Keeneland January sale will be held Monday through Thursday with sessions beginning daily at 10 a.m.