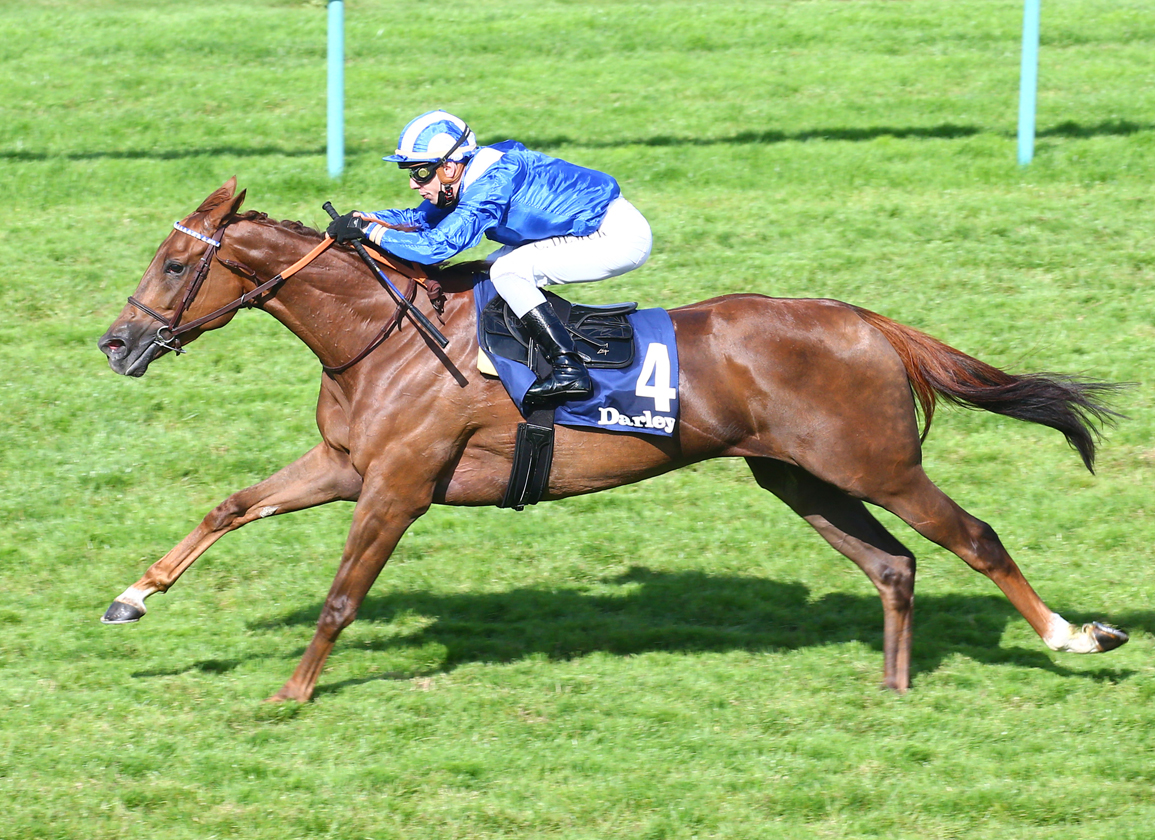 Shadwell's 4-year-old distaffer Raabihah (Sea the Stars {Ire}), unsuccessful in five outings since annexing last term's G3 Prix de Psyche at Deauville, rebounded off three second-place efforts this year and produced a telling burst at the end of Sunday's G2 Darley Prix de Pomone to register an impressive score upon her return to the Normandy venue. The contest was delayed by an excessive hold in the gates while a replacement battery was installed a failed break and the homebred chestnut was positioned in a stalking fourth for the most part. Quickening smartly in the centre of the track to seize control from the pacesetting Mystery Angel (Ire) (Kodi Bear {Ire}) with 300 metres remaining, the 29-10 third choice quickened again once in front and surged clear to easily account for Joie de Soir (Ire) (Fastnet Rock {Aus}) by 2 1/2 lengths. Valia (Fr) (Sea the Stars {Ire}) was left standing at the delayed break and made strong late headway to finish a short neck shy of second.

Raabihah's run of five defeats included a second in last term's G1 Prix Vermeille and a fifth in ParisLongchamp's G1 Prix de l'Arc de Triomphe, with this year's renewals of both contests now back on the radar, and a run of three seconds in May 2 G3 Prix Allex France back at the Bois de Boulogne venue, Saint-Cloud's May 26 G2 Prix Corrida and Clairefontaine's Aug. 1 Listed Prix du Pays d'Auge leading up to this redemption.

“With regard to her performances this year, I think she lacked a bit of her old sparkle,” reflected trainer Jean-Claude Rouget. “If you go back to last year she started her season very early at Cagnes-sur-Mer and ended in the Arc so it was a very long campaign. She had to pay for it at some point, it took its toll in the spring and she earned her little break at the beginning of the summer. She is obviously now back to her best and in time for the major races in the autumn. I didn't hesitate to nominate this race, rather than go for the [G1] Prix Jean Romanet because I feel this longer trip suits her much better. I don't know for certain which race she will go for next, but it could be the [Sept X G1] Prix Vermeille [back at ParisLongchamp].”