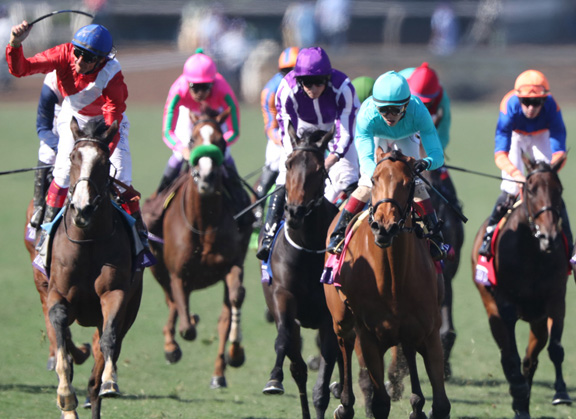 Queen's Trust (GB) (Dansili {GB}), winless in six subsequent attempts since a winning 'TDN Rising Star' debut at Kempton last September, just got her nose down on the line over favored Lady Eli (Divine Park) in the GI Breeders' Cup Filly & Mare Turf to score the first victory for Europe in this year's World Championships.

Getting first-time Lasix as an 8-1 proposition in this Stateside debut, the bay dropped back to run ninth past the wire the first time as Avenge (War Front) assured an honest pace up front, clicking off a :23.10 quarter and :46.16 half. Second-last at the half-mile pole, Queen's Trust began to rev up three deep between rivals on the far turn beneath Frankie Dettori, followed the stretch move of Lady Eli and matched strides with that one in the final 100 yards, just getting a nostril down first in a heart-stopping finish.

Queen's Trust becomes the seventh Breeders' Cup winner for trainer Sir Michael Stoute, and third in the F/M Turf off the heels of Islington (Ire) in 2003 and Dank (GB) in 2013.

“Well, she's run a great race in the Nassau behind Minding,” Stoute responded when asked about the decision to cross the pond for the Breeders' Cup. “She had every chance that day, she just wasn't quite good enough. But it was an excellent performance. I looked at what was going to be lining up. She hadn't had a tough season. She was unfortunate, again, in her final start in England. Came through it well, and I thought I really would like to have a crack at this Filly and Mare Turf. But I needed to persuade, and I wasn't optimistic about it, because I knew their stand. But fortunately they came up with an affirmative, and thank God they did.”

Queen's Trust will remain in training at four, according to Cheveley's Park's Chris Richardson. She is the first Breeders' Cup winner for David and Patricia Thompson's legendary operation.

“She's a very talented filly, as Sir Michael has always maintained,” Richardson said. “It's very exciting to have had a homebred to be able to be competing at this level. Sir Michael has been with Mr. and Mrs. Thompson for over 35 years, and it's wonderful having had a little bit of a mixed introduction to the Breeders' Cup to come here and have a fantastic day.”

He continued, “The filly is hugely talented. We've seen her perform. She's had good draws and been a little unlucky in a number of the races that she's been competing in at the Group 1 level. And she's shown a terrific turn of foot, and past horses like her, a true champion in the final stages of her last three starts. That was certainly shown today.”

Lady Eli, heroine of the 2014 GI Breeders' Cup Juvenile Fillies Turf at Santa Anita, lost nothing in defeat adding another chapter to her remarkable story after overcoming a bout with laminitis.

“I was thrilled the way she ran today,” trainer Chad Brown said. “I was somewhat concerned to see her so far back early, because it left her with so much to do. [Jockey] Irad [Ortiz Jr.] was hopelessly trapped early, but somehow miraculously got out in the final turn to give her a chance to win. I wasn't sure which filly got it at the wire, but the more I saw the replays, the worse it looked for us. Frankie rode a fabulous race and it was just two great horses down to the finish line. Naturally, I'm disappointed, but still very proud of her.”