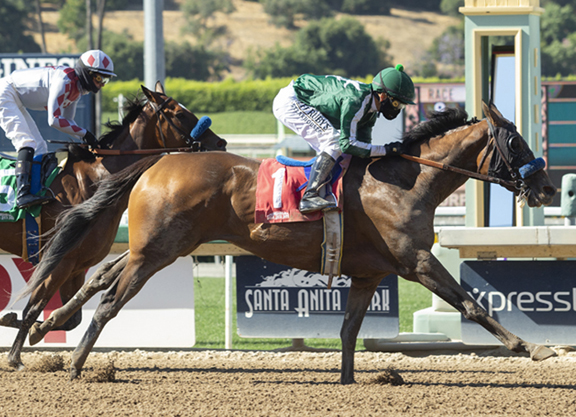 Sprinting for the first time in her career, Gingham (Quality Road) was the recipient of a supremely confident Mike Smith ride and jumped out of the ground at the eighth pole, rolling past her chief market rival Been Studying Her (Fast Anna) to register an impressive victory in Saturday's Angels Flight S. at Santa Anita.

Not surprisingly beaten for speed and last after breaking from gate one, the $420,000 Keeneland September yearling purchase rode the rails into the stretch while in hand. Been Studying Her struck to the lead approaching the furlong marker, but Smith cut the ribbons on Gingham and exploded through the final stages and was cozily taken in hand under the line.

Gingham, who broke her maiden going a mile here on Halloween, added a first-level allowance at that distance Jan. 3. The distant runner-up to Venetian Harbor (Munnings) in the GII Las Virgenes S. Feb. 8, she was most recently a mid-pack fifth in the May 1 Gardenia S. at Oaklawn Park.

A May foal, Gingham is the 43rd stakes winner for her successful Lane's End-base stallion. The filly's second dam carried the Stone Farm silks in four-graded stakes victories on the turf and produced Chapel's SW/MGSP full-sister Senada–in turn the dam of GSP Layla Noor (Midnight Lute)–GISP Arthur's Tale (Bernardini) and SP War Hoot (War Chant). Gingham has a yearling full-sister and a foal half-brother by Hard Spun. Click for the Equibase.com chart or VIDEO, sponsored by Fasig-Tipton.