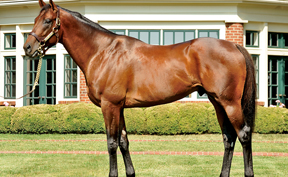 Far behind 'TDN Rising Star' Justin Squared (Zensational) in his main-track debut at Del Mar Sept. 5, Frank Conversation earned his diploma switching to Santa Anita's downhill turf course Oct. 16. Third–one spot behind subsequent GIII Sham S. hero Collected (City Zip)–in Del Mar's grassy GIII Cecil B. DeMille S. Nov. 29, he was last seen fading to fifth after setting the pace in the GI Los Alamitos Futurity Dec. 19. Drafting from a perfect spot in third early, the bay asserted in upper stretch and spurted clear to win with ease. “I had [Frank Conversation] up here three days ago and the first day he was just kind of adapting to the track, but the second day he opened up in his gallop and I knew we were in good shape,” revealed Leandro Mora, assistant to trainer Doug O'Neill. “We'll see how he is in the next few days, but I'd say it's even money that he'll be back for the [Feb. 13 GIII] El Camino Real Derby. We'd like to earn some points for the Kentucky Derby.” The winner's dam is a full-sister to Grade I winners Unusual Suspect and Golden Doc A.