Protests Not An Issue On An Unusual Derby Day 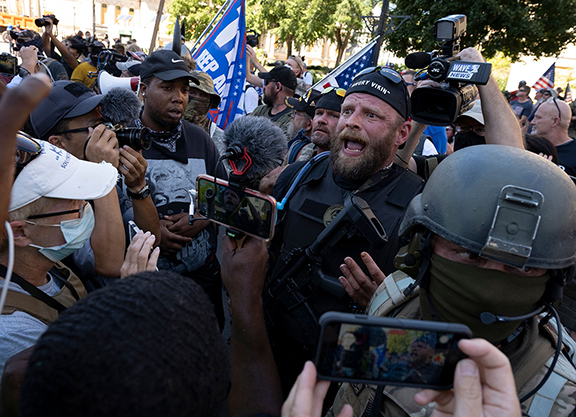 That was the chant that the social justice group Until Freedom chanted at the Louisville police force as they marched outside of Churchill Downs on Saturday, but despite the presence of opposing groups brandishing weapons and carrying American flags and Trump 2020 signs, as they said, there was no riot here.

The clashes many feared would materialize on Derby Day failed to do so. With opposing groups lining up on opposing sides of the track with police in riot gear lining up behind a fence opposite each group, there was little opportunity for interaction.

Just before the race, protesters chanted and waved noisemakers and chanted Breonna Taylor's name, according to the Louisville radio station WFPL, which broadcast updates throughout the day.

The police were out early and in force outside of Churchill Downs, concentrating their resources on the area despite wider-spread protesters in town earlier in the day. Minor confrontations between groups on either side of the issue began early, according to WLKY, Louisville's CBS affiliate, which reported that first to arrive downtown was a group calling themselves “patriots” of a right-wing militia led by a man calling himself Angry Viking and chanting pro-police slogans. USA Today reported that a group of “predominantly white men, women and children” clad in helmets and face masks carrying firearms marched through downtown. While police separated the groups, the situation didn't escalate beyond that.

By 4:30, according to WLKY, Until Freedom-a social justice group with the goal of addressing systemic and racial injustice–was holding a peaceful rally at South Central Park before marching to Churchill Downs. Police kept the pro-Trump groups far away.

Louisville has been one of the focal spots for the Black Lives Matter protests which ensued after the death of George Floyd, and protestors had hoped to benefit from the national focus on the Derby to promote their message of racial injustice. Floyd, a 46-year-old Black man, was killed in Minneapolis May 25 after police office Derek Chauvin held his knee on Floyd's neck for over eight minutes while Floyd begged for his life and said he couldn't breathe.

The protests over Floyd's killing inspired similar ones in Louisville, where Taylor, a 26-year-old Black woman and Louisville EMT, was killed in March when three policemen burst into her apartment in the middle of the night and opened fire, shooting her eight times. Because there was no police body camera footage of the incident, it went largely unnoticed by the national press or the racial justice movement until activists got hold of the story. While one officer was fired, the two others remain on the force while calls for their arrests continue to mount, and incidences of violence in the city have increased.

Taylor was killed just six miles from Churchill Downs, and many organizers of the protests had wanted the Derby to be suspended this year, including Louisville pastor Tim Findley. “Absolutely not,” Findley told NBC News on Saturday when asked if he felt the Derby should have been held Saturday. “The eyes of the world are on Louisville this weekend. The Derby is the perfect event to let the world know the community is not okay. People will look back and say there was a collection of people–an entire city really–that stood up and said we cannot go on with business as usual.”