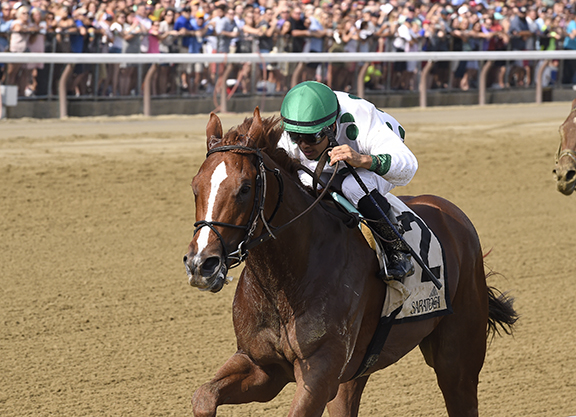 “He had ankle surgery [during his time off] and since he's come back he's been training very well,” Dale Romans told the NYRA notes team. “He just keeps getting better. There's a lot of money out there for him. I think he'll run well. He's doing good enough.”

Romans continued, “He likes every track, but he did perform very well there last year. He's going to do the same thing this time, they're going to have to come get him.”

Fellow Grade I winner Firenze Fire closed out 2019 with a pair of victories in the Fabulous Strike S. at Penn National and Aqueduct's Gravesend S. Dec. 22. He picked up where he left off in 2020 with a four-length domination of the GIII General George S. at Laurel Feb. 15. Transferred from Jason Servis to Kelly Breen after the former was indicted for use of performance-enhancing drugs, Firenze Fire was a well-beaten fourth in his first start for his new barn in a sloppy renewal of the GI Carter H. June 6, run at Belmont instead of its traditional spot on Aqueduct's GII Wood Memorial S. card, which was canceled due to COVID-19.

While not quite as fleet-footed as the top two on the morning-line, Diamond King (Quality Road) has a shot to get some money here. Capturing the Stymie S. Mar. 7, the bay faded to seventh last tone in the Blame S. going that distance at Churchill May 2. He has done his best work at a mile or longer, but did win at seven furlongs back in 2017 in the Heft S.