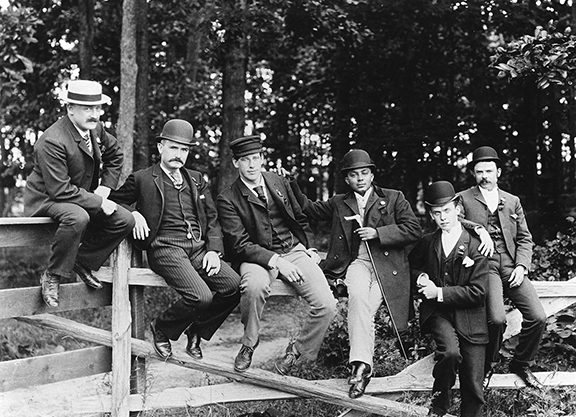 Leon Nichols, Calvin Davis and affiliates of the Project to Preserve African-American Turf History are seeking additional backing to bring the story of the 1890 Isaac Murphy-Snapper Garrison match race aboard Salvator and Tenny at Sheepshead Bay Park. The event, held after Murphy and Salvator defeated Garrison and Tenny in the Suburban earlier in the year, was billed by press at the time as a race between “Black and white.”

PPAATH was the subject of a Katie Ritz feature in the TDN in 2020. The nonprofit's founder and co-founder, Nichols and Davis, are working on their script alongside producer James Walton, and say their film is poised to be the first in U.S. filmmaking history led by a Black production team and the first to capture the contributions made and the conflicts faced by Black jockeys beginning in the late 19th Century.

Their story traces the life of Murphy, a legendary jockey and the first-ever inductee into the National Museum of Racing Hall of Fame, and says the group, “illuminates and bridges persistent racial divides.”

African American jockeys held places of prominence across the Kentucky Derby's first 27 years, said Chris Goodlett, Dir. of Curitorial & Educational Affairs at the Kentucky Derby Museum. But by the 20th Century, he said, institutional racism and segregation had taken hold.

In June 1890, amid intense racial and political unrest, Murphy was the central figure in the match race, after the owner of Tenny demanded a rematch after his loss in the Suburban.

“With `white' and `colored' signs popping up in response to Jim Crow laws,” said a release from PPAATH, “all eyes were on Murphy and his rival, Ed `Snapper' Garrison. One sealed America's fate for generations to come in a photo-finish race that was dubbed `the greatest in the history of thoroughbred racing' by the New York Times.”

“There's a lot to unpack here,” said Walton. “In 1890, Jim Crow legislation struck a severe blow to horseracing and forced out the clear majority: Black jockeys. One after another, their obituaries then piled up. High-profile Blacks' ability to do what they loved was snatched away as mobs of emboldened whites pushed for segregated tracks. Soup Perkins, who'd won the Kentucky Derby at age 15, drank himself to death by age 31. Tommy Britton committed suicide by swallowing acid. Albert Isom publicly shot himself in the head.”

“The discrimination they faced in everyday life they also faced on the racetrack–confronted with an ideology that tore apart our nation and an entire industry,” said Nichols. “'PHOTO FINISH: The Race of the Century' celebrates one man's ability to beat the odds. Before Jordon, Ali and Owens, there was Isaac Burns Murphy. He was a hero in the eyes of Blacks and unsympathetic whites knew that. He achieved millionaire status and acclaim at a time when others feared for their safety. Yet, here we are today, in 2021…still fearful.”

PPAATH is seeking backers and tax incentives in various U.S. filmmaking hub zones in order to develop a series of films which showcase Black jockeys and pay homage to courageous acts which have gone unrecognized for more than a century. Learn more at PPAATH.org.