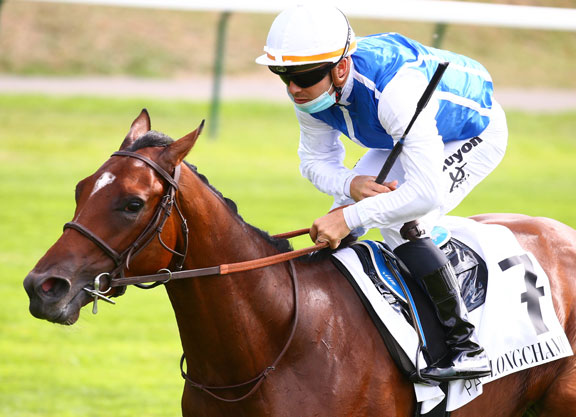 All eyes were on the Wesley Ward raider Wink (Midshipman) in Thursday's G3 Prix d'Arenberg at ParisLongchamp, but it was the Wertheimers' Kalahara (GB) (Frankel {GB}) who ended up on top at the end of the five-furlong test. Racing in rear early under Maxime Guyon as Stonestreet Stables' unbeaten Aug. 2 Colleen S. winner predictably made the running, the homebred was wound up to reel her in passing the furlong pole. Despite hanging down to her left, the 6-1 shot asserted for a length verdict over the visitor and 4-5 favourite, with the G3 Prix du Bois winner Livachope (Fr) (Goken {Fr}) adding substance to the form two lengths behind in third. Winning trainer Christophe Ferland was rewarded for his decision to drop back from six furlongs with the Aug. 2 Deauville maiden scorer. “After her win last time, I had said to everyone that she's run in the [G3] Prix Eclipse, but I had second thoughts and after talking to Maxime we had this idea–I worked her at home with speedy older horses and was doing it very nicely,” he explained. “I knew she had some talent, but now I'm convinced she has a lot.”