Prioritize Looks to Cap Off Bond's Great Season in the Woodward 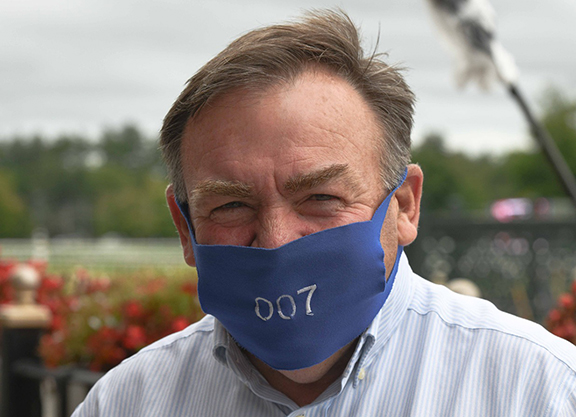 SARATOGA SPRINGS, N.Y. – On the final weekend of what has been a very good Saratoga meeting, veteran trainer Jim Bond will take a swing with long shot Prioritize (Tizway) in Saturday's GI Woodward.

The Woodward, being run at 1 ¼ miles for the first time since Easy Goer won the 1989 edition at Belmont Park, is Prioritize's first try in a Grade I and his first graded stakes in almost two years. Prioritize, a 5-year-old gelding owned by Bond's longtime patron William Clifton Jr., was a turf horse back in Oct. 2018 when he was third in the GII Hill Prince.

Late last year, Bond moved Prioritize to the dirt and he has flourished, with two wins and two seconds in four starts. The most recent was a neck victory over Money Moves (Candy Ride {Arg})–who is running in the Kentucky Derby–on July 25. In the Woodward, Prioritize will face five others, led by GII Suburban winner Tacitus (Tapit).

“It's a tough race, there is no lying about it,” Bond said. “But it's a handicap and I think they were pretty fair with the weight.”

Prioritize, who drew the outside post and will be ridden by Eric Cancel, will carry 115 pounds. Tacitus is the high weight at 124.

Bond, whose private stable on Gridley Ave. is a couple of blocks from the Nelson Avenue gate to the Saratoga backstretch, is enjoying a great summer at Saratoga. He is eighth in wins with 11 and 12th in purse earnings with $462,418. While he has had plenty of success at Saratoga through the years–he's won the GI Travers once and the GI Whitney twice–this is one of his better seasons. Last year his stable won seven races; in 2018 he visited the winner's circle twice.

“I am proud of the horses. I am proud of my staff. I am grateful for my owners. It has been a fantastic season,” he said, sitting in his office that has posters and photos of his standouts like Will's Way, Tizway, L'Carriere and Bhudda on the walls.

Bond said the strong summer at the Spa was especially gratifying in a year that has been like no other because of the world-wide Covid-19 pandemic that shut down racing in New York from mid-March to early June.

“There were times when you saw me in May and in the beginning when this place opened, we were scared to death,” he said. “If this thing came back and bit us again, it could be all over. This barn may have to be for sale. I have worked my life to try and build something special for the family and it was tough. This game is, needless to say, hills and valleys. You just hold on and hope to God you can survive going up that hill again.”

Bond said he thinks his best year at Saratoga was 12 victories.

“I am scared to count sometimes because it's scary,” he said. “You just do your job, that's all. We don't look back. We keep doing what we are doing and hopefully it keeps going. I am very proud of the homebreds because a lot of the homebreds have stepped up really, really well. That to me is really huge. I am cautiously optimistic … we have a lot of nice 2-year-olds and we haven't run any 2-year-olds yet. I think the best is yet to come.”

Describing Prioritize as “a grinder,” Bond said he thinks the nine-furlong win over Money Moves over his home course will set him up for the Woodward.

“Every time I have asked him to do something a little bit better, he has done it,” Bond said. “He is a big, scopey colt. He has a lot of distance pedigree on the bottom. Tizway, I always thought, would go a mile and a quarter but he never had the opportunity, unfortunately. The horse is doing great but he has to step up his game. But you know what? He is in his backyard and I just have to lead him over there and it's $500,000 in COVID times. All I can do is look good.”

Bond heads a family operation with his wife Tina and their two sons and assistants, Kevin and Ryan. The Bonds have a farm nearby and are deeply connected to the Saratoga Springs region. Despite his stable's success this summer, Bond said the meet hasn't been the same without spectators.

“I feel bad for the fans,” he said. “I feel bad for the local people who like to come once or twice a year to say they were here at Saratoga and to get a glimpse of the great work everyone does here, the jockeys, the trainers, the owners picking out horses, the breeders. It's hard. It is not an easy task for anybody.”