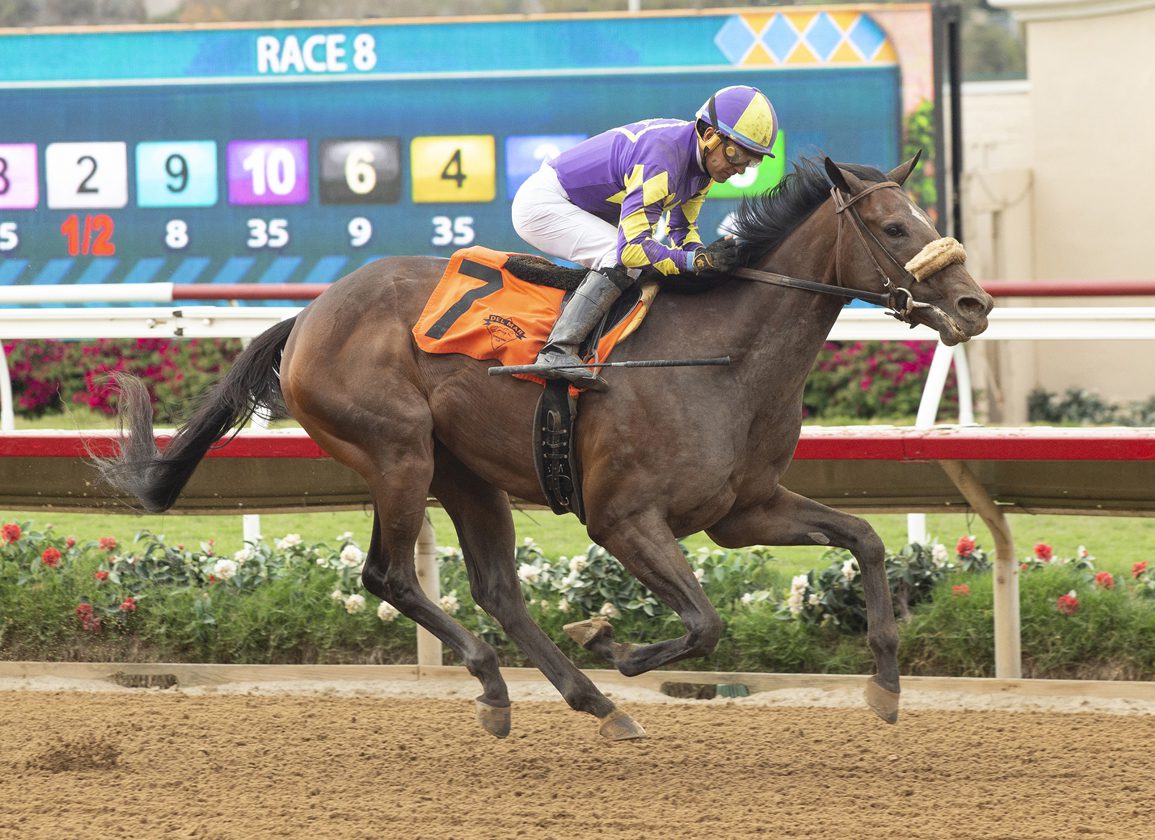 Despite her $725,000 Keeneland September price tag, C R K Stable's Justique (Justify–Grazie Mille, by Bernardini) snuck a bit under the radar Sunday evening as Bob Baffert-trained Home Cooking (Honor Code) took virtually every dollar of tote support in a salty looking Del Mar maiden special weight. But there was no missing Justique in the stretch, as she inhaled her competition super impressively to become her freshman sire (by Scat Daddy)'s sixth individual winner and second 'TDN Rising Star'.

Bidding to become the first debut winner for trainer John Shirreffs since June of 2019 (his second most recent was future GISW Hard Not to Love {Hard Spun}), the half-sister to fellow freshman sire Mo Town (Uncle Mo), GISW, $519,600, was very slowly away as 1-2 Home Cooking knocked heads with $600,000 2-year-old purchase Fourth Street (Street Sense) on the front end. Justique picked rivals off rapidly midway on the turn for home, but still had her work cut out for her as Kissed by Fire (Friesan Fire)–herself a $350,000 FTMMAY grad–ranged up and looked the most likely spoiler. But Justique really caught the eye as the top two passed the eight pole, and she bowled over the top of them under just a hand ride with a move that–dare we say–was a bit reminiscent the one made by Shirreffs' Hall of Fame mare Zenyatta (Street Cry {Ire}) in her own unveiling. The winning margin was three lengths and the final time was 1:04.29. Kissed by Fire bested the big chalk for second.

Mo Town, who has three winners thus far himself and stands alongside Justify at Coolmore, got the 'Rising Star' nod for a second-out romp on the stretch-out in 2016. He immediately added the GII Remsen S. and reached the highest level on the Del Mar lawn the following season when reinventing himself as a turf horse and annexing the GI Hollywood Derby.

Dam Grazie Mille produced a full-sister to Justique Mar. 29 and was bred back to 'Rising Star' factory Into Mischief for 2023.