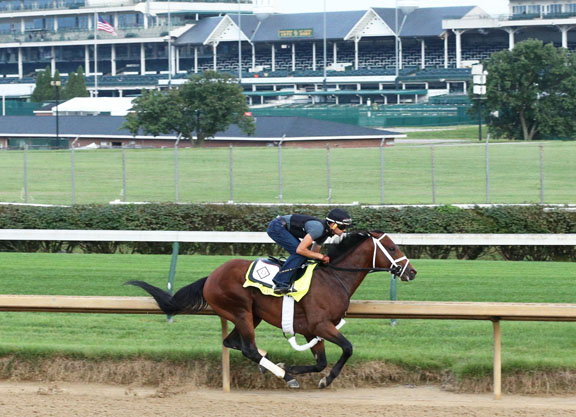 A trio of candidates for the GI Preakness S. at Pimlico Oct. 3 turned in their final serious moves Saturday morning at Churchill Downs.

Bruce Lunsford's Art Collector (Bernardini), who was forced to miss the Sept. 5 GI Kentucky Derby owing to a minor foot injury, tuned up for the final leg of this year's reconstituted Triple Crown by drilling a half-mile in :48 flat with big-race rider Brian Hernandez, Jr. in the saddle. The GII Toyota Blue Grass S. and Runhappy Ellis Park Derby hero was caught in fractions of :12.40, :24.40 and :35.80 before galloping out six furlongs in 1:13.60. The half-mile clocking ranked as the seventh-fastest of 78 works at the distance.

“Brian and I discussed it beforehand, and that's what we were shooting for,” said trainer Tommy Drury about the methodical splits, “I told Brian, 'He's a 12s kind of horse. He seems to do that easy enough, so let's just do what he does easily.' Kind of textbook: 48, out in a minute. I think they had him three-quarters (of a mile) in 1:13. He seems to have bounced out of it well. Now we just stay out of his way for a week.”

“I think he got plenty out of his work last week, so we were just looking for something maintenance this week,” Drury said, “and that's kind of his maintenance work. Brian was letting him cruise along. I didn't see that he ever moved his hands. We got exactly what we were looking for.”

With jockey Florent Geroux at the controls and blinkers back on, Albaugh Family Stables and Spendthrift Farm's Thousand Words (Pioneerof the Nile) went five furlongs in 1:00.60 in splits of :11.80, :24.40 and :48.20. He, too, was out three-quarters of a mile in 1:13.60. The $1-million Keeneland September yearling purchase was scratched from the Derby after flipping in the paddock.

“We were hoping that he would do something like this,” Hall of Fame trainer Bob Baffert said from California. “He had to work better than he did last week. Last week, he was just sort of lazy and didn't get into it, but now he worked really well. This week he was very willing, which is very good. You want to see a horse that is very willing and he was very willing today.”

“I thought he worked a lot better today with blinkers,” Geroux told the Churchill notes team. “Last week was his first work over the track so he didn't wear them but went very easy. It was a bit more of a serious work today.”

Swiss Skydiver (Daredevil) breezed five panels in 1:00.80 beneath Tyler Gaffalione. The GI Alabama S. winner and recent runner-up in the GI Longines Kentucky Oaks clicked off fractions of :12, :23.60 and :35.80 before pulling up six furlongs in 1:15.20. Trainer Ken McPeek later told Daily Racing Form that Swiss Skydiver has been given the green light for the Preakness.

Country Grammer (Tonalist), winner of the GIII Peter Pan S. and fifth-place finisher in the GI Runhappy Travers S., breezed a half-mile in :50.25 Saturday morning at Belmont in preparation for a scheduled Preakness start.

“He had a nice maintenance breeze this morning; nice and steady. I wasn't looking for anything crazy,” trainer Jorge Abreu said.

Jesus's Team (Tapiture), third in the Jim Dandy S., breezed five furlongs in 1:03.40 at Monmouth Park Saturday morning in preparation of the Preakness.