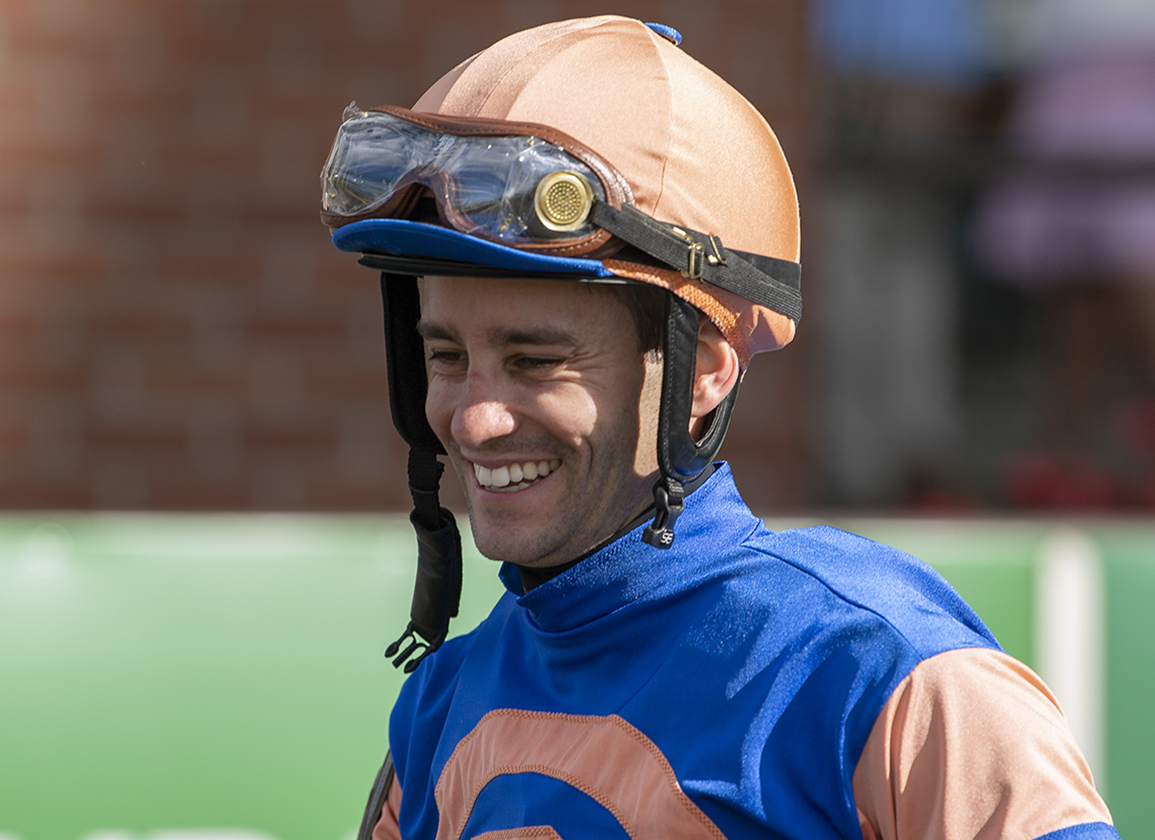 ELMONT, NY – There will be a capped crowd of 50,000 on hand for Saturday's blockbuster GI Belmont Stakes program. Nobody will have a better seat in the house all day than jockey Flavien Prat.

The 29-year-old Frenchman will be aboard 2-1 morning-line favorite 'TDN Rising Star' We the People (Constitution) in the final leg of the Triple Crown. He will also pilot unbeaten sensation and fellow 'Rising Star' Flightline (Tapit) in the prestigious GI Hill 'N' Dale Metropolitan H. Both will exit from post one.

With Saturday's forecast calling for cloudy skies and temperatures nearing 80 degrees, he'll have a fast main track to work with this time.

“I think the talent is there,” Prat said. “His Peter Pan was a really good race. It's just a question mark with the distance, but it seems like we are all in the same boat.”

The unbeaten Flightline, pound-for-pound the most exciting horse in training, has won his first three starts in Southern California for trainer John Sadler by a combined margin of a whopping 37 1/2 lengths, led by his last out jaw-dropping score with a gaudy 118 Beyer Speed Figure in the GI Runhappy Malibu S. Dec. 26. He will face off against the ultra-talented GI Carter H. winner Speaker's Corner (Street Sense) as well as last year's GI Breeders' Cup Sprint winner Aloha West (Hard Spun) in the highly coveted stallion-making race. The $1-million Fasig-Tipton Saratoga yearling and 3-5 morning-line choice is campaigned in partnership by Hronis Racing, Siena Farm, breeder Summer Wind Equine, West Point Thoroughbreds and Woodford Racing.

“He feels like a special horse,” Prat said. “He's been responding really well to everything we ask him to do. He could be any type of horse.”

Some of Prat's other high-profile mounts on the absolutely loaded 13-race card include:

“Whether it's the Belmont, Preakness, Derby or Breeders' Cup weekends, this is the goal when you're a jockey,” Prat said. “You want to ride the best horses and face the best riders. That's the main goal. When you have the chance to ride and participate in these types of weekends, I'm obviously really grateful.”

After dominating the scene in Southern California for the past few years, Prat, somewhat surprisingly, shifted his tack to Belmont–home of the deepest jockey colony in the country–earlier this spring. His goal for the remainder of the year is simple: win an Eclipse Award as the nation's outstanding jockey.

“I was doing really well out there, but if I ever wanted to try New York, I felt like it was the right time to do it,” Prat said of relocating to Long Island along with his wife and two young children. “Try to keep improving my riding style and see what we can do out here.”

“That's the whole point, to ride with the best riders in the country and also to try to keep improving,” Prat said.

In addition to an intriguing renewal of the GI Belmont S. and a showdown for the ages in the five-deep GI Hill 'n' Dale Met Mile,

there will be six other Grade I events, albeit with some short fields, held on Saturday's star-studded program.

Champion and 'TDN Rising Star' Echo Zulu (Gun Runner) will cut back in distance to a one-turn mile in the GI Acorn S. after suffering the first defeat of her brilliant career while tiring to fourth in the GI Kentucky Oaks. She will meet just four rivals in the Acorn, led by the streaking Matareya (Pioneerof the Nile), a good-looking winner of the GII Eight Belles S. on the Oaks undercard.

The undefeated 'TDN Rising Star' Jack Christopher (Munnings), a dominating return winner in the GII Pat Day Mile S., puts his unblemished three-for-three record on the line against five fellow sophomores in the GI Woody Stephens S. The 1-2 morning-line favorite won last year's GI Champagne S. at Belmont in the fall before scratching from the GI Breeders' Cup Juvenile with a stress fracture in his left shin. The seven-furlong contest is named in honor of the legendary late trainer Woody Stephens, who won five consecutive renewals of the Belmont Stakes from 1982-86.

Champions Letruska (Super Saver) and 'TDN Rising Star' Malathaat (Curlin) will clash in a highly anticipated GI Ogden Phipps S. The former has five top-level wins to her credit, including a wire-to-wire tally in this race last year, and is perfect in two attempts since a forgettable performance in the GI Breeders' Cup Distaff. Last term's GI Kentucky Oaks heroine Malathaat, a good third in the Distaff, kicked off her 4-year-old campaign with a well-timed win in Keeneland's GIII Baird Doubledogdare S.

The best wagering opportunities of the day will likely come in two of the grass stakes.

Casa Creed (Jimmy Creed) returns for the 13-deep GI Jaipur S. after pulling off a 10-1 upset last year. Arrest Me Red (Pioneerof the Nile), a last out winner of the GII Twin Spires Turf Sprint S., is the 5-2 morning-line favorite.