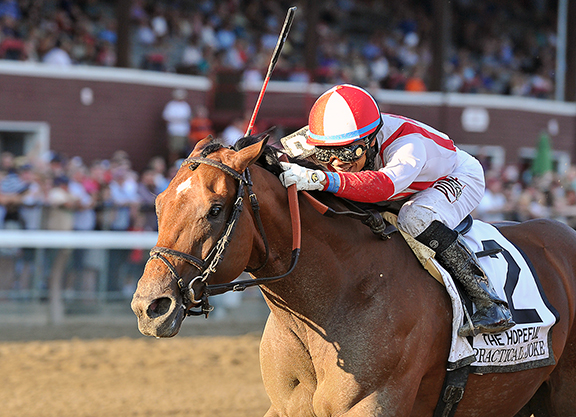 Champion sire Into Mischief has had a lot of good weekends. But this year's Kentucky Derby weekend had to be near the top of the list.

On Friday, his son Owendale ran second in the GII Alysheba S. at Churchill Downs only to be defeated by By My Standards, sired by none other than Into Mischief's leading son Goldencents.

Then the next day at Saratoga, Into Mischief's daughter Frank's Rockette became a Grade II winner in the Prioress S. while at Gulfstream, Cool Arrow won the GIII Smile Sprint S. To wrap up the day, the speedy Baffert-trained Authentic became Into Mischief's first Kentucky Derby winner in a historic Run for the Roses.

On the same day four years ago, another son of Into Mischief made headlines when Practical Joke took the second of five wins in New York in the GI Hopeful S.

“The professionalism that he showed in only his second start, to make a start like that so quickly and go to the lead to win with authority, really impressed me,” recalled Coolmore's Adrian Wallace. “He stamped his class and his speed, and also the fact that he could take that speed around a turn and go seven furlongs.”

Campaigned by Klaravich Stables and William H. Lawrence, the Chad Brown trainee was undefeated in his first three starts as a juvenile, taking his division in New York by storm.

“He was, without a doubt, the top New York 2-year-old of his division,” Wallace said. “Anytime you have a horse that wins GI Hopeful S. and then the GI Champagne S., you have a serious sire prospect on your hands.”

Practical Joke continued his domination of New York in his second season, winning the GIII Dwyer S. followed by the GI H. Allen Jerkens S. He retired with close to two million dollars in earnings and took up stud duty at Ashford Stud in 2018.

Coming off a big weekend from Into Mischief and his son Goldencents, the first yearlings from Practical Joke are hitting the market at a highly opportune time.

McMahon and Hill Bloodstock's Mike McMahon said he knew from the start that he wanted to get his hands on a Practical Joke weanling.

“You had to use Practical Joke in your pinhook strategy,” he said. “He was a successful 2-year-old, he was fast and he's by Into Mischief. You had to be thinking about him. We went after a couple early, but Larry Best got them.”

Best's OXO Equine purchased a colt out of Promisedyouheaven (Unbridled's Song) for $240,000 at the Fasig-Tipton November Sale, and then a second colt out of Bailzee (Grand Slam) days later at Keeneland for $260,000.

After missing out on a few other Practical Joke offspring, McMahon said he remembers meandering the sales ground and stopping by the Bedouin Bloodstock consignment. There he stumbled upon a colt by Practical Joke out of four-time stakes producer Miss Mary Pat (Service Stripe).

“That colt came out and I was like, 'Oh my god, I can't believe I missed this horse.' He was the best Practical Joke I had seen,” he recalled. 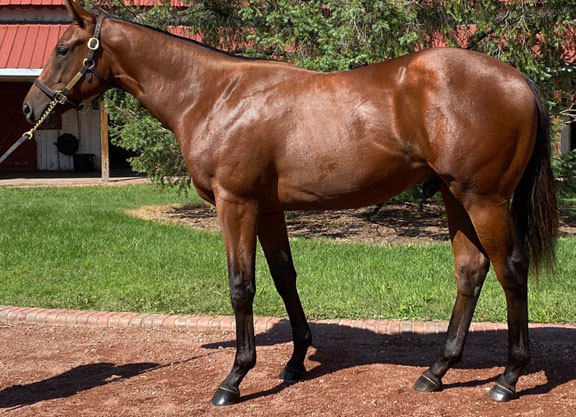 The colt is now slated for the first day of the Fasig-Tipton Selected Yearlings Showcase as Hip 252 with the Gainesway consignment.

“This colt has a lot of quality,” McMahon said. “He's a beautiful horse- a big hip, lovely top and he's correct. He's been very straightforward. I wish they were all so easy.”

Another 19 Practical Joke yearlings are catalogued for the Fasig-Tipton sale, and an additional 76 will go through the ring at the Keeneland September Sale.

“The thing that impresses me most about the Practical Jokes are their physiques,” said Wallace. “They're big, very masculine-type horses. They cover a lot of ground and are good movers. They've got good shoulders and hips on them.”

One yearling that Wallace will have an eye on at Keeneland is Hip 1539, a colt out of the stakes-winning Rock Hard Ten mare Rock and Glory.

“He's a very masculine, powerful horse,” he said. “He's going to tick a lot of boxes and should be very popular at the sale.”

Wallace said he believes Practical Joke's yearlings will attract a wide range of buyers in the coming weeks.

He also added that he thinks Practical Joke's racing achievements are an indication of the success the horse will soon have at stud.

“There's always exceptions, but horses that show brilliance at two and then can carry that on at three, they're the ones that make the best sires,” he said. “They're the ones breeders want to breed to and the ones the sales market wants. Practical Joke embodies that, and the fact that he's a son of Into Mischief is a huge feather in any horses cap.”