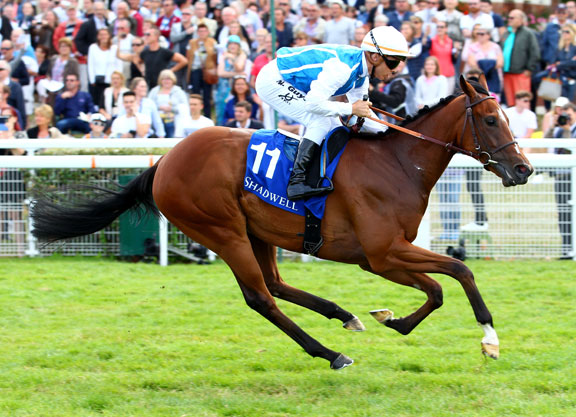 “I'm very happy with her and I think she's as good as she was last year,” Head commented. “I was delighted to see her winning again last time. You need a lot of luck in a race like this, so we'll see.”

Heading the customary overseas challenge is Lael Stable's G1 Prix de la Foret heroine One Master (GB) (Fastnet Rock {Aus}), shortening up from a mile after finishing third in the G1 Queen Anne S. at Royal Ascot on June 18 and second in Newmarket's G1 Falmouth S. on July 12. Trainer William Haggas is hoping things will fall right for her. “There are no Group 1s over seven furlongs until the Foret, so we have to juggle and I had her in the Lennox this week. After the rain, I wish I'd run her. When I gave Monsieur Boudot the option of last week's Rothschild over a mile or this, he was in absolutely no doubt to go for this. She nearly gets a mile–the last bit just catches her out–but you'd hope her turn of foot will stand her in good stead. It's a strong race, though.”

Saeed Manana's Invincible Army (Ire) (Invincible Spirit {Ire}) looked to be peaking when winning the May 15 G2 Duke of York S., but was only seventh in the G1 Diamond Jubilee S. at Royal Ascot on June 22 before rebounding to take the G3 Chipchase S. on Newcastle's Tapeta a week later. “He's ready and raring to go–we've enjoyed ourselves in France this season,” trainer James Tate said. “We've won with everything that has completed–unfortunately New Graduate pulled up at Vichy. We let him down just for a week after Newcastle, because he'd had two quick-ish runs. We think the flat track at Deauville should really suit him. It's half a furlong extra, but I don't see that being a problem.”

Of the 3-year-olds, Pretty Pollyanna (GB) (Oasis Dream {GB}) returns to the scene of her 2018 G1 Prix Morny triumph and holds strong claims after missing the break when fourth in the G1 July Cup at Newmarket on July 13. The Gredleys' homebred was second in the G1 Irish 1000 Guineas at The Curragh on May 26 and this trip could suit ideally.

If the ground is not too quick, Phoenix Thoroughbred Limited's G1 Commonwealth Cup and G1 Phoenix S. hero Advertise (GB) (Showcasing {GB}) has a major chance to add to his top-level successes. Short of a mile, he has been beaten only three times by Calyx (GB) (Kingman {GB}), Too Darn Hot (GB) (Dubawi {Ire}) and Ten Sovereigns (Ire) (No Nay Never), with the latter taking his measure in the July Cup. “He's all set and we're pretty bullish about his chances,” trainer Martyn Meade said. “We've been very happy with him since Newmarket and hopefully this is a bit easier than the July Cup.”

At Dusseldorf, the G1 Henkel-Preis der Diana features no British or Irish raiders and sees Darius Racing's Donjah (Ger) (Teofilo {Ire}) making her seasonal bow having looked a generation leader when taking Krefeld's G3 Herzog Von Ratibor Rennen over 9 1/2 furlongs in November. She will have to be something special to win this German Oaks without a prep and she has some talent to overcome to do so, including Gestut Ebbesloh's June 15 Listed Preis Dusseldorf and July 6 G3 Mehl Mulhens Trophy winner Durance (Ger) (Champs Elysees {GB}) and Gestut Rottgen's June 9 G2 Diana-Trial scorer Akribie (Ger) (Reliable Man {GB}).