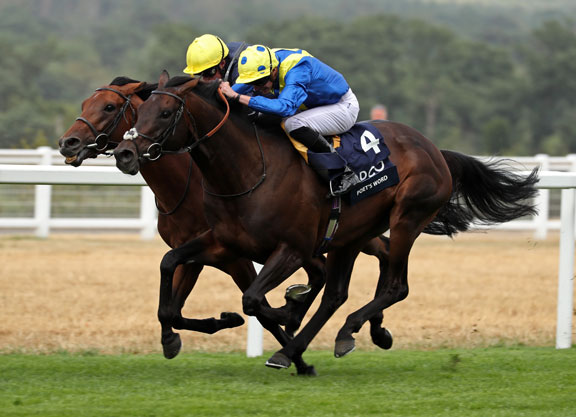 If there were any doubts that his defeat of Cracksman (GB) (Frankel {GB}) was an aberration in the Royal meeting's G1 Prince of Wales's S., Saeed Suhail's Poet's Word (Ire) (Poet's Voice {GB}) quashed them on Saturday as he mastered his rock-hard stablemate Crystal Ocean (GB) (Sea the Stars {Ire}) in an epic encounter. Ever since Royal Ascot had passed, this renewal had looked between the Freemason Lodge pair who are equally the manifestation of Sir Michael Stoute's training method and with Cracksman and Kew Gardens (Ire) (Galileo {Ire}) absent this became a truly two-horse affair. As William Buick set the 6-4 favourite Crystal Ocean alight two out, man-of-the-moment James Doyle was delivering Poet's Word with perfect poise from behind and the 7-4 second favourite ranged alongside a furlong out. Neither of the yard's duo were prepared to give an inch close home as they raced for the bragging rights but Poet's Word proved just the stronger by a neck, with the solid yardstick Coronet (GB) (Dubawi {Ire}) a healthy nine lengths behind in third. “They are two wonderful brave athletes and my first reaction is to feel sorry for the runner-up,” Stoute commented after a crowning moment of his distinguished career which now features the outright record of six winners in this prestigious showcase. “They are a joy to train–they are two admirable, honest and sound competitors and there is nothing between them really. A big team effort served that up.”

Providing Stoute with the Royal Ascot record last time, Poet's Word was in many ways the perfect specimen to hand his trainer another landmark here. His official BHA ratings have climbed as his career has progressed, with no blips, and his trajectory has an unflinching upward progress to it. Decades of handling these type of thoroughbreds meant that Stoute had the sense to take it steady at two and three and when he was fourth in the 10-furlong handicap on the Epsom Derby undercard that the stable had previously won with Conduit (Ire) (Dalakhani {Ire}) it was time to lower sights for the time being. Poet's Word responded with a win in a similar event at Glorious Goodwood and an even better second at Doncaster in September before picking up the thread seamlessly on his 4-year-old bow at Chelmsford last April.

Chester's May meeting was chosen as the black-type debut for Poet's Word and he proved up to the task when a neck second to Deauville (Ire) (Galileo {Ire}) in the G3 Huxley S. at 10 furlongs before earning the laurels in the 12-furlong G3 Glorious S. on deep ground back at Glorious Goodwood in August. Jumping into group 1 company when a half-length second to Decorated Knight (GB) (Galileo {Ire}) in the G1 Irish Champion S. at Leopardstown the following month, he tried his hardest next time but could not live with Cracksman as he trailed seven lengths behind in second in the G1 Champion S. here. Sixth in the G1 Hong Kong Cup at Sha Tin Dec. 10 and second to Hawkbill (Kitten's Joy) in the Mar. 31 G1 Dubai Sheema Classic at Meydan, he returned to Europe to annexe the G3 Brigadier Gerard S. at Sandown May 24 and arrived for the Prince of Wales's with solid claims without being considered in the same vicinity of Cracksman. While the immediate tendency was to put his dramatic reversal of the Champion form there down to fast ground and the indifference of the Oppenheimer homebred, thinking time and reflection allowed the Stoute representative greater credit especially after Hawkbill ran so close in the Eclipse having been 10 1/4 lengths behind at Royal Ascot.

With Rostropovich (Ire) (Frankel {GB}) taking front-running duties off Salouen (Ire) (Canford Cliffs {Ire}), the pace was unflinching which allowed the Stoute runners to draft and conserve energy for their inevitable scrap. Crystal Ocean committed first straightening for home and for a few strides that looked a winning move given how well he stayed in last year's St Leger and Doyle was still over two lengths adrift. The Rothschild homebred had the rail to help as he attempted to give his stablemate the slip, but Poet's Word was unleashing his devastating late surge and he ran straight and true in a pursuit that only had one outcome. “He is so versatile and such a genuine warrior–everything he does is very focused,” Doyle said. “He switched off very well and they went a hell of a pace today–they were flying down the hill and I had to be patient. I ended up following Coronet, which wasn't really the plan, as I wanted to be in front of her and if I had been I think I would have won a bit easier. She dropped off bit on the home turn, which was frustrating as Crystal Ocean got first run on me and I left him with a bit of a task. I had to be brave and attack late and he's helped me out. Sir Michael said to keep it smooth and he's a real star.”