More Than Ready, It's Pletcher's Time 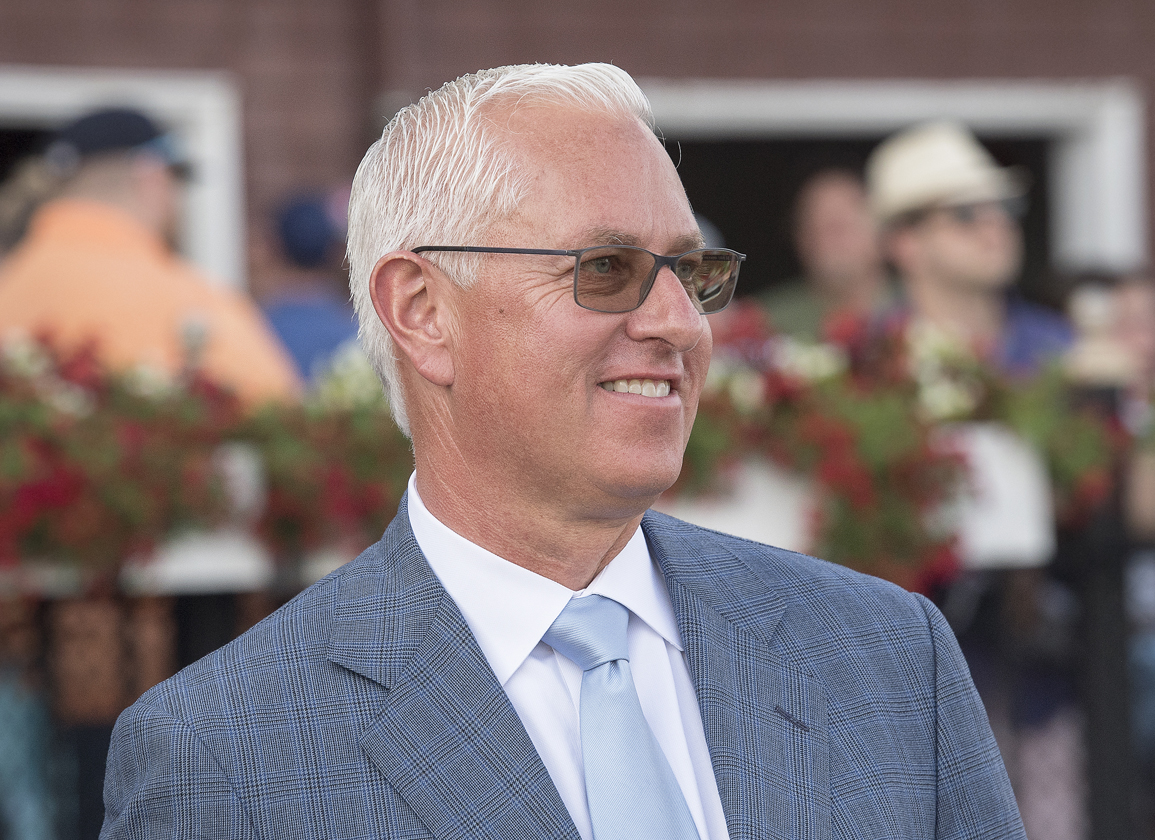 For at least a decade, there were no “if” or “when” questions about Todd Pletcher and the Hall of Fame.

If? By the time he won the GI Kentucky Derby for the first time with Super Saver in 2010, Pletcher, then a month away from his 43rd birthday, already had nine champions, four Eclipse Awards as outstanding trainer, four national money-earned titles, had topped the Saratoga trainers table six times and had earned the Gulfstream Park training title for the seventh consecutive year. Super Saver's Derby triumph was his 72nd Grade I victory.

When? With that remarkable resume in place halfway through his 15th season as a trainer, Pletcher already was a lock to be elected to the Hall of Fame at the National Museum of Racing. It just became a matter of time for him to become eligible in 2021, meeting the Hall of Fame requirement of 25 years as a licensed trainer.

As a result, the announcement in May of the first-time-on-the-ballot elections of Pletcher and 2015 Triple Crown winner American Pharoah might rank as the biggest non-story in racing this decade.

Pletcher, 54, will be formally inducted during the annual Hall of Fame ceremony Friday morning at Fasig-Tipton's Humphrey S. Finney Sales Pavilion. Since the 2020 ceremony was cancelled due to the COVID-19 pandemic, the Hall of Fame classes from both years–a total of seven people and three horses–will be inducted and honored. Pletcher will be the final inductee on the stage and said that he will deliver an acceptance speech that will last between six and seven minutes. If Pletcher's attention-to-detail past is prologue, he will hit the mark. 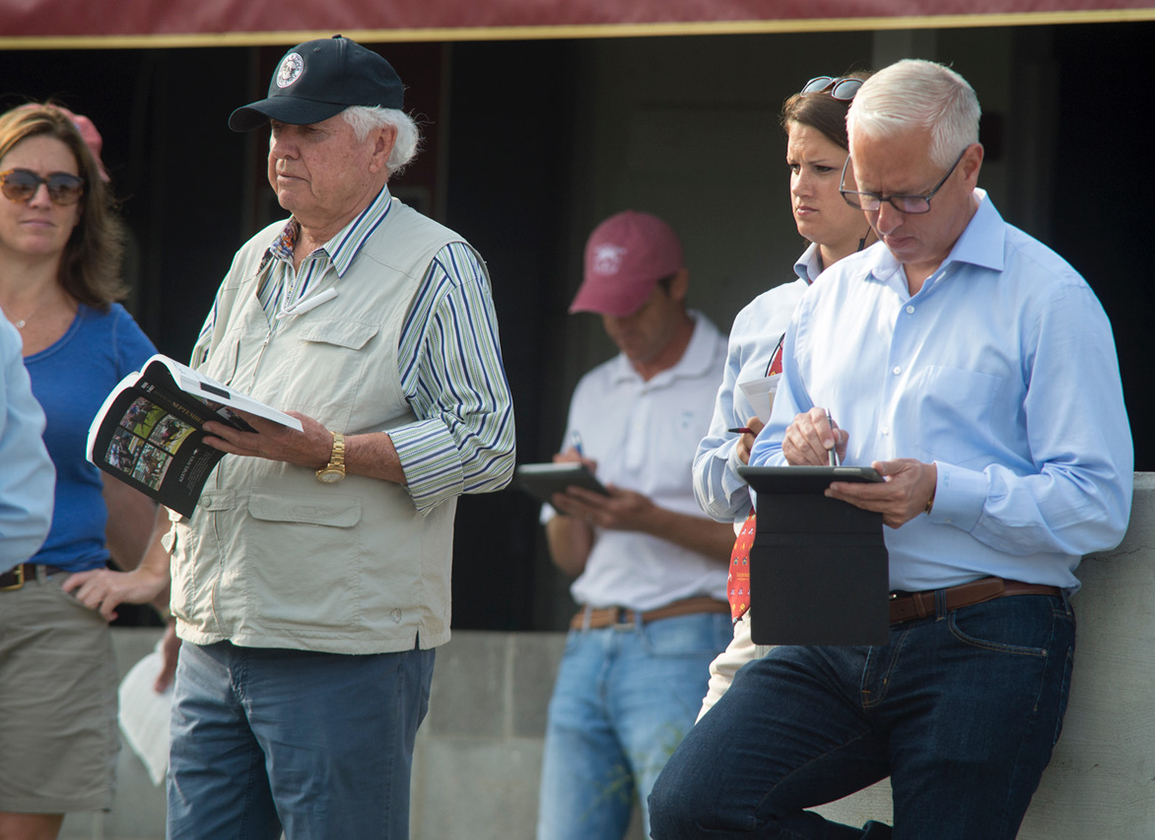 While he grew up in a racing family based in Texas, graduated from the University of Arizona's Racetrack Industry Program and was promptly hired by superstar trainer D. Wayne Lukas, Pletcher said the Hall of Fame was not something he aimed for in his youth.

“I never thought about the possibility of that happening,” he said. “Once things start going well you're aware of it. Certainly, having worked for Wayne while he was inducted, I was aware of that. But I didn't start off thinking that's my goal.

“The goals that we try to, as a team, put in place are pretty simple. We try to do the best job we can with each and every opportunity we get with each and every horse. In some cases that's winning a maiden New York-bred or a claiming race or whatever.”

That approach quickly carried Pletcher to the top of sport and ultimately to the Hall of Fame. He became racing's career leader in purse money earned in May 2014 when he passed Lukas with Jack Milton's victory in the Poker at Belmont. In September 2015 Pletcher became the first trainer to crack $300 million in earnings. He led the way to $400 million on January 30.

Since his father Jake trained Thoroughbreds and Quarter Horses in the Southwest, horses and racing have always been a part of Pletcher's life. He began helping his father when he was in elementary school.

“I knew early on that I wanted to train horses. The only time there was any question was just when I was going to do it,” he said. “I wanted to go to work right after high school and both of my parents felt very strongly that they wanted me to go to college. The one compromise that we made was that I go get a college education. I'm glad I did. It was a fun four years of my life.”

Thanks to his father's involvement in racing, Pletcher had summer jobs in high school and college with top trainers Henry Moreno, Charlie Whittingham and Lukas. In December 1988, during senior year in college, Pletcher met with Lukas. At that point, Lukas was operating a huge national stable with divisions being managed by his son Jeff and other talented young assistants, including Randy Bradshaw, Kiaran McLaughlin, Mark Hennig and Dallas Stewart. 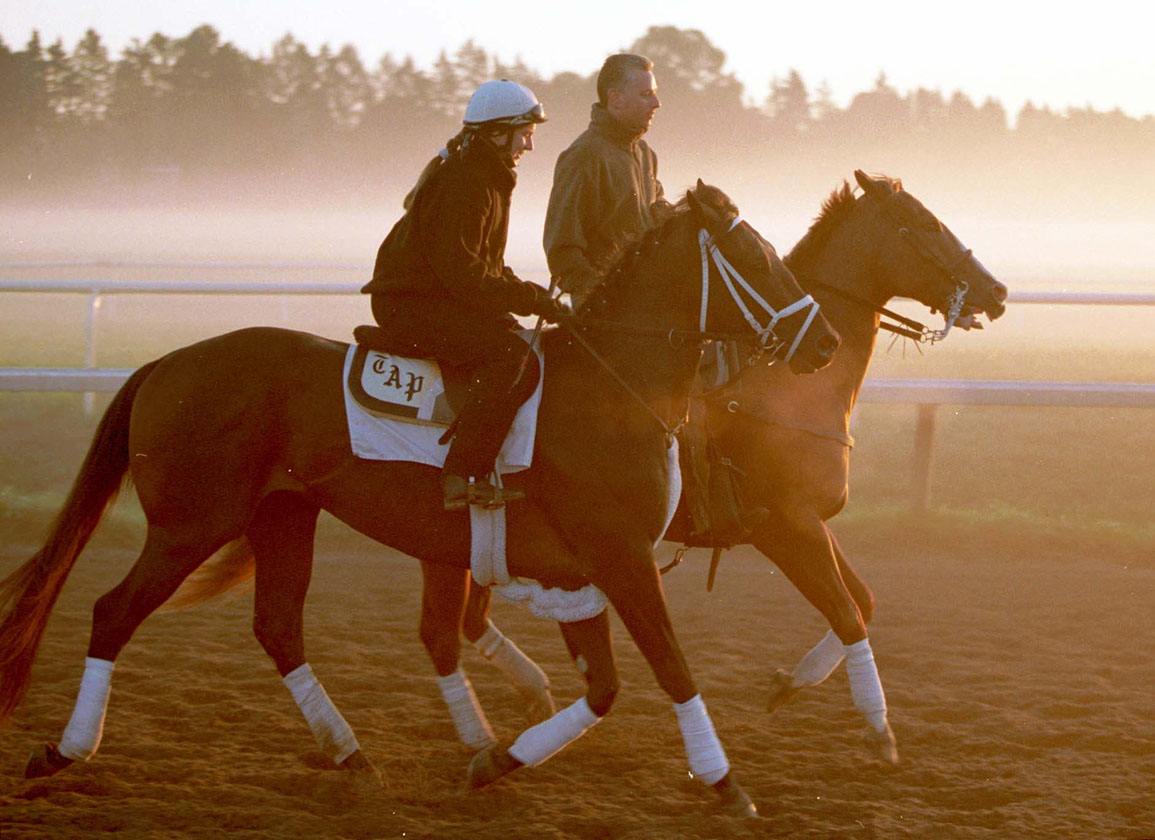 More Than Ready, the first of Pletcher's top runners to find prominence as a sire | Horsephotos

“I sort of had an informal interview with Wayne at Santa Anita,” he said. “He told me I could count on a job, to give him a call when I graduated and he would tell me where to go. When I did that he said go to Belmont. Part of what was so great about that was going to work, not only for Wayne, but Jeff, who was the assistant for half a year and Kiaran was an assistant for the other half. I got to work under those two guys.

“Jeff was a huge influence. He was a pretty strict disciplinarian, but he was a good coach. He expected things done a certain way. I think learning under him was important. And then the other half of the year working with Kiaran, I got to work with two guys, very different personalities, that were both very talented horseman. It was a really good balance for me.”

Pletcher has said through the years that being hired by Lukas was important to the development of his career.

“It was such a great learning environment, to not only being exposed to so many good horses, but seeing the organization itself and how that operated,” he said. “Plus, by being in a larger organization, you were able to get some additional responsibility that you might not in a smaller barn.”

Lukas said that it was clear from the beginning that Pletcher was a good fit for his stable.

“He started out right. He had a very strong work ethic and he had a great attention to detail,” Lukas said. “One of the things that we impart to those guys is attention to detail and organization. We organize the barn. That comes from my coaching background probably, but we organize the barn. He adapted to that and fell into that very quickly and became very, very strong.”

In 1991, Pletcher was promoted to assistant trainer. He stayed on with Lukas, managing barns in New York and Florida until late in 1995 when, at the age of 28, he took out a license to open his own stable.

“It was very difficult to leave,” he said. “You're walking away from a tremendous assistant job. You're working around the best horses in the country. To leave that and open up a stable where I had seven horses, none of which had ever won a race; it was intimidating to leave that but for me it felt like it was time to. If you're ever going to do it, you just got to do it. 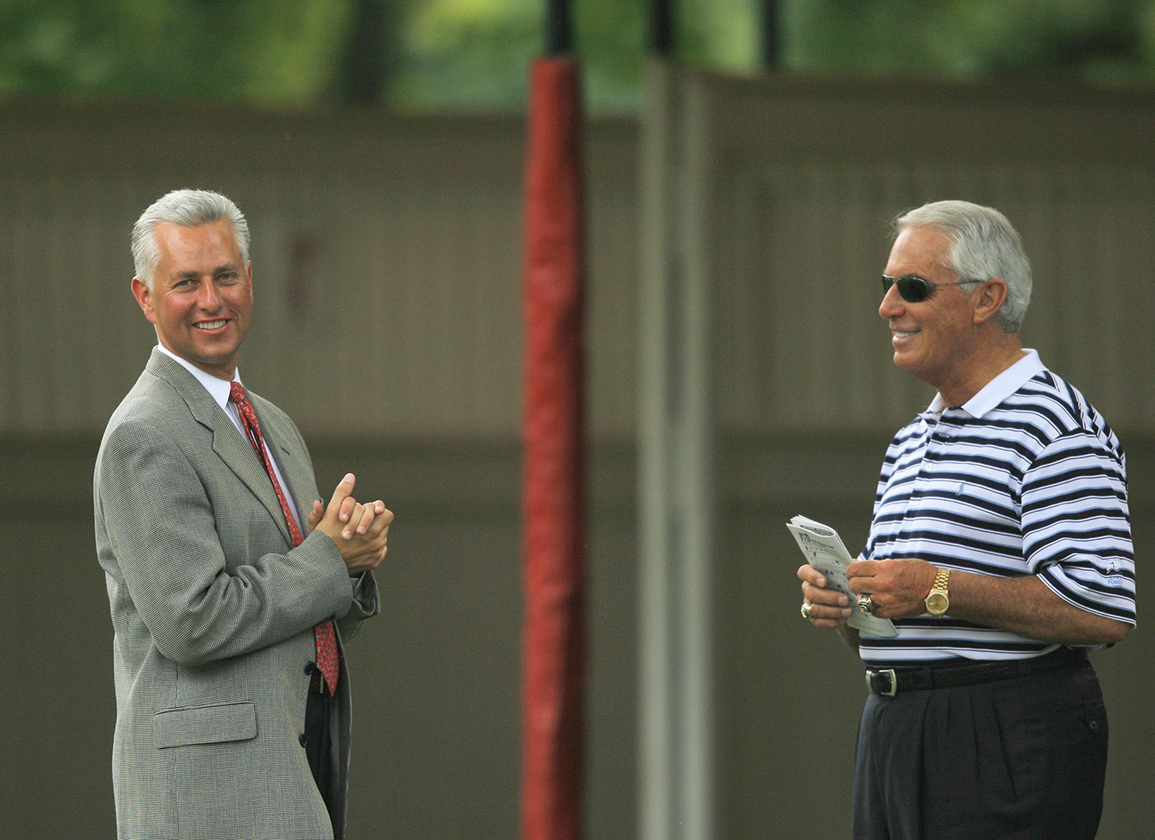 Pletcher and Lukas in 2006 | Horsephotos

“Sometimes as an assistant, you kind of think the phone's going to ring one day and 'Hey, you've got 20 horses that I want you to train.' I think after a little while you realize that you've just got to get out there and try to do it yourself and see if you can succeed. I talked to my parents a lot about it, to my wife a lot about it and we decided it was. Let's give it a shot.”

Pletcher's first career starter, Paramount, finished sixth of 12 on Jan. 13, 1996, at Gulfstream Park. Thirteen days later, Pletcher won with his second runner, Majestic Number, in a maiden claimer race for 3-year-old fillies. Jerry Bailey, who had been Pletcher's babysitter on occasion years before when he prepping for what turned into a career as a Hall of Fame jockey and whose father was Pletcher's dentist, was up for that important first victory.

In July 1996 at Monmouth he picked up his first stakes win with Stu's Choice in the $40,000 John McSorley. The first graded stakes win came in 1998, the year that the 31-year-old won the first of his 14 Saratoga titles. According to Equibase, through Sunday, Aug. 1, Pletcher was seventh in career wins with 5,155 and his $409,890,881 in career earnings was more than $48 million clear of runner-up Steve Asmussen. Pletcher's website shows a total of 1,328 stakes won by his runners. That list of stakes includes two Derby wins; three in the GI Belmont S.; four GI Kentucky Oaks; six GI Florida Derbys; three in the GI Whitney and two GI Travers. He has won a total of 11 Breeders' Cup races in nine divisions. Many of his top horses have been ridden by Hall of Fame jockey John Velazquez in a longstanding partnership.

Pletcher said that the filly Jersey Girl and More Than Ready, who won of a total of 13 stakes between them from 1997 to 2000 were the horses that put him on the map. His legacy, he said, is likely to be the colts that raced for him and went on to become prominent stallions, starting with More Than Ready. When it is posed, Pletcher gently pushes away an obvious question on the eve of his Hall of Fame induction: does he have a favorite horse? 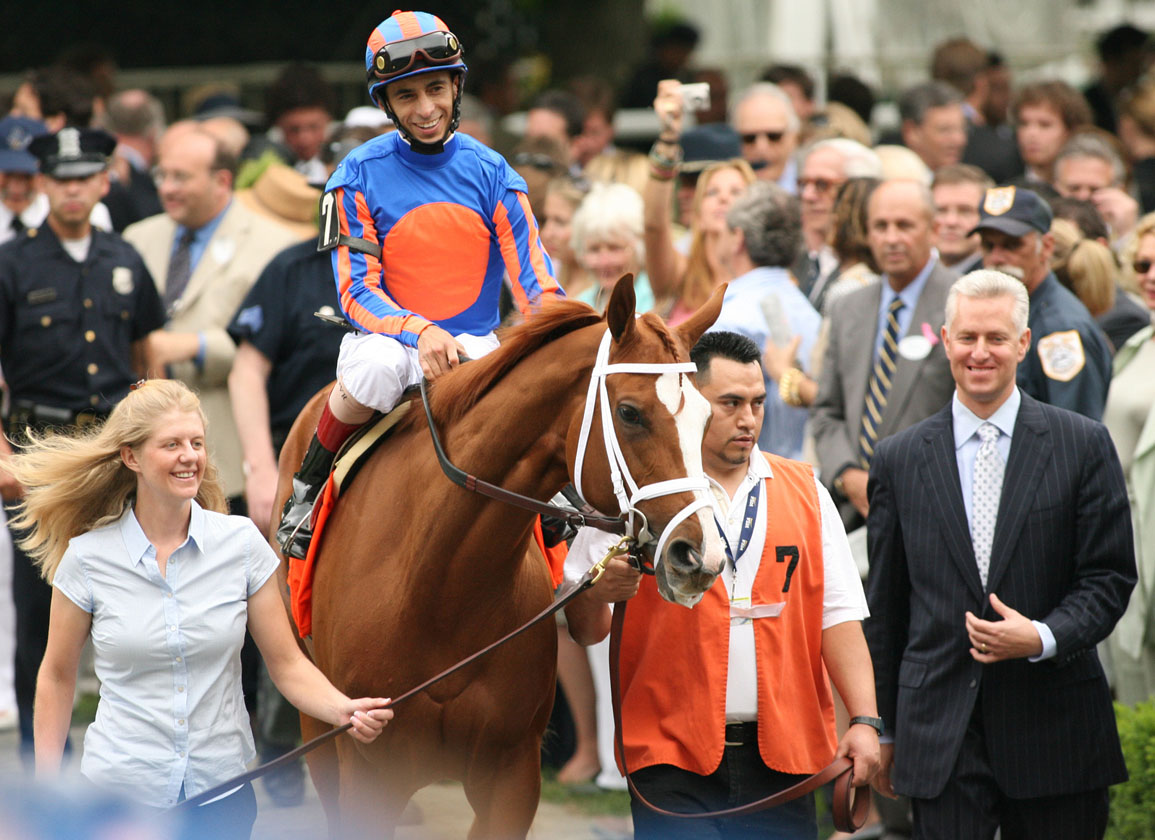 Pletcher got his first Classic win with Rags to Riches | Horsephotos

“No, and I try to avoid that,” he said. “I've always said the most excited I've ever been after a race was when Rags to Riches won the Belmont (2007). That's still holds true for a lot of reasons. One, just the enormity of a filly winning a Belmont. But the fashion that it happened when she stumbled at the start and the stretch-long duel (with Preakness winner Curlin). My first Classic win and Johnny's first Classic win. It was just so much to be excited about.

“As far as all-time favorites, I've been blessed to have a lot of good ones.”

Like Lukas and other prominent horsemen who found early success and established their Hall of Fame credentials, Pletcher had to wait until he reached his year of eligibility to be placed on the ballot. Lukas said Pletcher had made his mark long ago.

“His career, exemplifies so much perfection, so many good things,” Lukas  said. “That's what it's all about. He's why we put people in the Hall of Fame when they have the character and work ethic and achievements that he's put together. That's why we get guys in. I'm glad to welcome him to our fraternity.”

Pletcher's wife Tracy, their three children and his parents will be part of the group of about 15 family members that will attend the induction. Typically composed in victory and defeat, Pletcher said he's not sure how he will react when it's his turn to be inducted.

“Everyone that I've talked to said yes, be prepared to be emotional,” he said. “Hopefully I can hold it together, say the right things. I'm going to be careful about naming too many individuals because I fear leaving someone out.”