Plenty of Ways to Go in UN 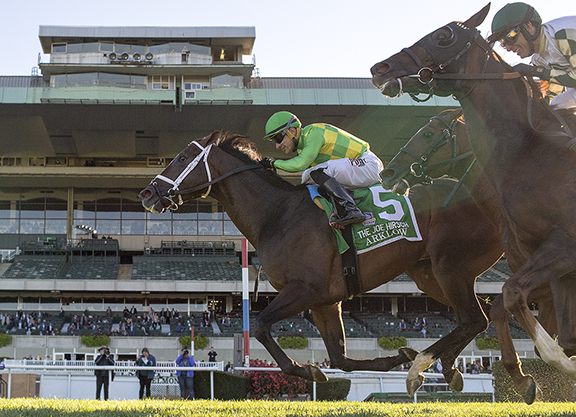 A mostly well-matched group of nine turfers line up in Saturday's GI United Nations S. at Monmouth Park. With a somewhat surprising lack of even one Chad Brown trainee signed on, conditioner Mike Maker owns the lone chance to complete an exacta. The 2017 UN winner sends out reformed claimers Aquaphobia (Giant's Causeway) and Muggsamatic (Any Given Saturday). The former was scooped up for $62,500 in January and promptly took a Gulfstream starter stake over Muggsamatic–then trained by Jason Servis–in February. He was fourth in the GIII Mervin Muniz Memorial H. at Fair Grounds in March, second with a solid 101 Beyer Speed Figure in Gulfstream's May 9 Sunshine Forever S. and fourth again in Churchill's GII Wise Dan S. June 20. He hasn't gone quite as far as this 1 3/8-mile distance in quite some time, but has good back form at longer trips and a trainer whose prowess at finding prospects who want to run all day on the turf is unparalleled. Muggsamatic, claimed for $25,000 out of a local victory last August, was transferred to Maker after Servis's indictment as part of an alleged doping scheme. He picked up right where he left off for the new barn, going last to first in Gulfstream's Soldier's Dancer S. June 6. The farthest he's ever gone previously was nine panels, resulting in a dominant win for $22,000 here almost a year ago.

Arklow (Arch) is the lone Grade I winner in the field, having gotten up late against a salty group in Belmont's Joe Hirsch Turf Classic S. Oct. 5. He was eighth in the GI Longines Breeders' Cup Turf in November, and fifth behind another savvy Mike Maker claim in Zulu Alpha (Street Cry {Ire}) in the lucrative GI Pegasus World Cup Invitational Turf S. Jan. 25. Second by a neck in the June 13 GIII Louisville S. under the Twin Spires, he wheels back in six days off a sixth-place run–again behind Zulu Alpha–in Keeneland's GII Elkhorn S.

Paret (Aus) (Harbour Watch {Ire}) figures to show the way early and may very well be as loose as he wants to be. The Australian import was stakes-placed four times last term–at distances from 5 1/2 furlongs to 1 1/2 miles–and resurfaced at Belmont June 4 to steal the Tiller S. at this distance as a 38-1 shot. Current (Curlin) was fifth, Standard Deviation (Curlin) sixth and Corelli (Point of Entry) seventh that day.