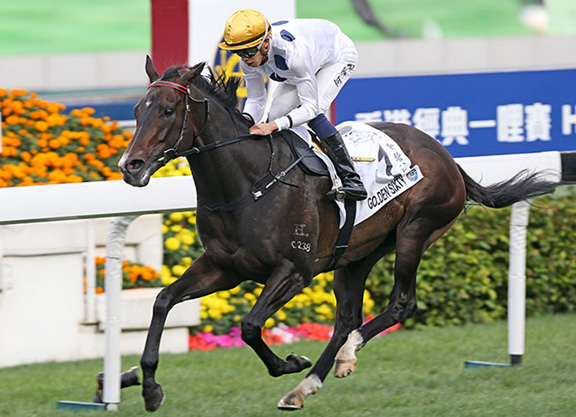 A field of 10 4-year-olds bred in either hemisphere line up for Sunday's HK$10-million Hong Kong Classic Cup (1800m), a field in which the top-rated galloper has some questions to answer and is likely to play second fiddle–at least from a pari-mutuel standpoint-to a stable companion.

Golden Sixty (Aus) (Medaglia d'Oro) is rated on 112 entering this middle leg of the 4YO Classic series, having posted eight wins from his nine trips to the post to date. He is perfect in five runs this season, including a defeat of more seasoned handicap rivals in an open Group 3 on New Year's Day ahead of the Hong Kong Classic Mile, in which he crossed the line 1 1/4 lengths better than fellow Francis Lui trainee More Than This (GB) (Dutch Art {GB}). On the downside, Golden Sixty spiked a bit of a temperature in recent weeks and the stable has expressed some doubt as to the gelding's ability to see out nine furlongs. Nevertheless, it is the Derby trail and he presses on to see exactly where he fits in the broader discussion.

“He's going from 1600 to 1800 metres, so there are more questions in my mind about Golden Sixty than More Than This for this race, but it's hard to say what the result will be,” Lui told the HKJC's David Morgan earlier this week. “I'm a little bit worried but he's been scoped, we've kept an eye on his blood count and that's all fine, he looks like he has recovered quickly.”

More Than This was ridden last time by Ryan Moore, but it will be Zac Purton at the controls Sunday afternoon.

“He's going well–he just went through the paces for me this morning,” the reigning champion jockey said. “He had a nice gallop on Monday on the grass when he followed another horse; he didn't join it, it was just giving him something to look at, something to follow.”

Moore teamed with the John Size-trained Ping Hai Star (NZ) (Nom du Jeu {NZ}) to win the 2018 Derby and he has the call on Champion's Way (Aus) (Hinchinbrook {Aus}) this weekend. A Group 3 winner at the tail end of last season, he was third to Golden Sixty on New Year's Day and in the Classic Mile and the 1800 metres may be stretching him as well.

Beauty Legacy (Aus) (Fiorente {Ire}) and Private Secretary (GB) (Kingman {GB}) each won on their Hong Kong debuts and the former should improve for his fourth in the Classic Mile, while Private Secretary looks to rebound from a disappointing 10th in a Class 2 over 1600m Jan. 11.

Enjoying (Aus) (Dundeel {NZ}) is the recipient of strong ante-post support off a ninth in Class 2 last time out in which he was badly hampered in the final 400 metres. Hugh Bowman, who won a Hong Kong Derby aboard Werther (NZ) (Tavistock {NZ}) for trainer John Moore, has the call from the yard Sunday afternoon.