Plenty of Action During Tuesday Trackwork at Meydan 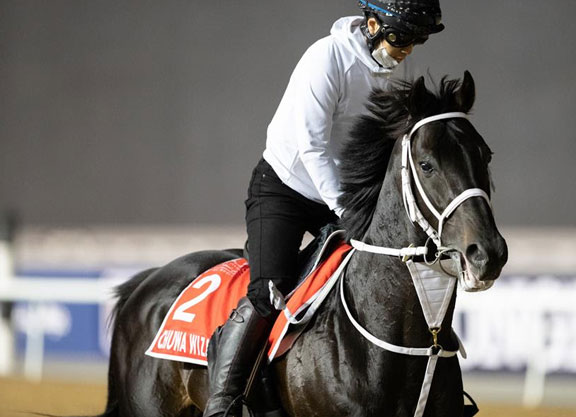 Last year's JRA Champion Dirt Horse and G1 Champions Cup hero Chuwa Wizard (Jpn) (King Kamehameha {Jpn}), who goes for the $12-million Dubai World Cup, galloped over the dirt track on Tuesday morning with regular pilot Keita Tosaki in the irons. He was ninth in the Saudi Cup in February.

“He has trained well so far,” said Tosaki. “The trainer told me to start a slow gallop at the beginning and then in the rest of the work I should decide the way he ran. I asked my horse to run comfortably and drive a bit more strongly towards the end of the stretch. He is more enthusiastic about his job compared to last time in Saudi, and I really understand how he is doing well and how good his condition is. He appears ready to race.”

Japan also fields a strong challenge in the $5-million G1 Longines Dubai Sheema Classic. Chrono Genesis (Jpn) (Bago {Fr}), a three-time winner at the highest level in her native land including the G1 Arima Kinen Grand Prix in late December, galloped over the turf track with pilot Yuichi Kitamura on board.

“I picked up from the third bend and drove her comfortably to bring out her flexibility, without having too strong a breeze in the stretch,” said Kitamura. “It was my first ride on the turf track at Meydan, and the ground seems to be firmer than I expected. I thought it would be more cushioned but the grass itself is in really good condition. The ground won't be her issue anyway. I am very proud of how well she has travelled for the first time with a long flight. She feels really good and is settling in well at the quarantine barn.”

G1 Japanese Oaks heroine Loves Only You (Jpn) (Deep Impact {Jpn}) worked on the dirt track with jockey Oisin Murphy aboard at 5 a.m.

“I have asked Oisin to get a feel for her and he said she was very fresh and sound,” said trainer Yoshito Yahagi. “I want her to put on a bit more weight as she lost some weight while she was isolated in Japan. But her flight experience last year when she came to Dubai helped her a lot this time. Since she arrived in Dubai, she has settled in well and her appetite has been back, and I hope she keeps improving her condition for Saturday's race. Oisin will give her a gallop either on dirt or turf tomorrow. He can choose whichever he likes.”

“Both worked very well this morning, they are fit and ready and we couldn't be happier with them.” Simon Crisford said. “Court House has run extremely well on the Meydan turf in his last two starts so we are hopeful he can run another consistent race. He's training well and enjoys racing up with the pace.

“Epic Hero has done very well since his first Carnival race and we are hopeful he can run a nice race. Obviously, he will need to improve on his best form, but he deserves to take his chance.”

Last out G1 Jebel Hatta victor Lord Glitters (Fr) (Whipper) who is also targetting the Dubai Turf, was also in action, and breezed a quarter mile on the Meydan grass.

Trainer David O'Meara said, “Lord Glitters did a nice breeze over 400m on the grass this morning. That will be his final piece of fast work before the weekend and he is in good order.”

Tinkler, who is currently in the UK said, “Acklam Express worked this morning and he worked very nicely as he followed Lord Glitters during his gallop. He has been doing very well in Dubai and seems to like it there.”