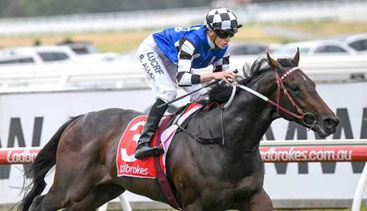 Plein Ciel made it 4 from 4 in Australia | australianbloodstock.com.au

Second in a pair of German appearances in early 2016, his current winning streak began at Warrnambool Nov. 17, continued at Sandown Dec. 7 and stretched to three with a convincing 3 1/4-length victory in his first appearance at this track on Boxing Day. Drawn gate one, Plein Ciel fell into a perfect spot from third just behind the pacesetter and traveled very comfortably beneath jockey Ben Allen. The $1.95 (9-10) favorite was guided off the rail with about three furlongs to travel, took command one away from the inside at the 300m and went on to score by a comfortable 3/4 of a length while failing to switch leads in the run to the wire. Cool Chap (Aus) (High Chaparral {Ire}, the 5-1 second favorite, was closest at the line.

“He's going really well,” Weir said. “Obviously he was racing inside them today and had to bustle his way out on the corner,” Weir told AAP. “Halfway up the straight it looked like he was going to run right away from them, but the last 100 yards, it wouldn't have wanted to be much further or Cool Chap might have won. But all you can do is win and he's going in the right direction. There's still a long way to go, but hopefully he ends up in a nice race one day.”

“A trip away wouldn't hurt him either, it would make him grow up a bit,” Weir told AAP.

Both winning owner Australian Bloodstock and Weir have tasted G1 Melbourne Cup success in recent years, the former with Prince of Penzance (NZ) (Pentire {GB}) in 2015 and the latter in 2014 with Protectionist (Ger) (Monsun {Ger}), who will cover Plein Ciel's dam this coming season. Another son of Mamool, Lucas Cranach (Ger), was third in the 2011 Melbourne Cup for Australian Bloodstock.