Pivotal’s Lightning Spear Gets Up For Celebration Mile Repeat 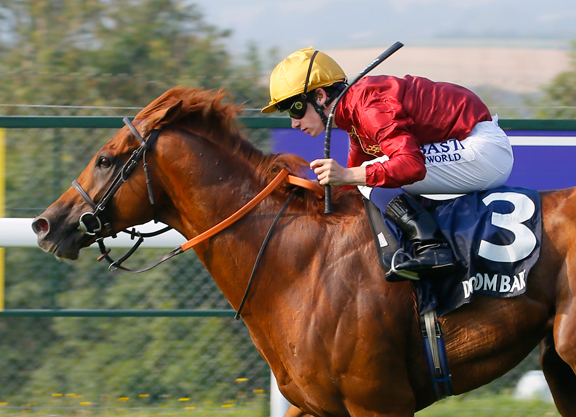 First and second in this contest 12 months ago, Lightning Spear and Zonderland had to be separated by the judge this time but it was ultimately the same result as the former got up in the final stride to deny the Cheveley Park homebred. Third in Ascot’s G1 Queen Elizabeth II S. in October, Qatar Racing’s chestnut was runner-up on his return in the G1 Lockinge S. at Newbury May 20 before flopping when ninth in the G1 Queen Anne S. at Royal Ascot June 20. Tried over 10 furlongs in the G1 Eclipse S. at Sandown July 8, he wound up seventh but was back in his comfort zone when a length third in the desperate conditions that hit the Glorious meeting in the Aug. 2 G1 Sussex S. Settled fourth early by Oisin Murphy as Hathal cut out the running, Lightning Spear looked beaten for a large part of the final quarter mile as Hathal kicked on. It was Zonderland who was the first to cut him down on his belated seasonal bow inside the last 50 yards, but Murphy found something extra from the favourite and in a week of photo finishes he had his head down first on the line.

The result obviously meant a great deal to the jockey and Murphy said, “I just about got it right. I made no secret about how tactical the race was going to be. It was impossible to know what was going to happen, but you have to have confidence you have chosen to do the right thing and thankfully I just about got it right. Fair play to Sheikh Fahad and David Simcock for persevering with the horse. They got him here in tip-top shape after a heavy ground performance in the Sussex. It was a good performance today.” The operation’s racing manager David Redvers added, “We sponsor the race at Ascot [the G1 Queen Elizabeth II S.], but I imagine the [G1 Prix de la] Foret [at Chantilly Oct. 1] is a strong possibility. I believe he has a group one in him and we’ve always believed he has.”

Zonderland’s trainer Clive Cox said, “It was close, but he has run a blinder after a year off. I’m pleased with the performance he put up. From where I was I hoped we had held on, but it was a bit like yesterday with the angles at York and sadly we were second. He has run a blinder and credit to my team as it has been a long year. I’m thrilled he is back here in good nick. I hope he will go to Ascot. It is a shame he was second, but credit to the winner.”

Lightning Spear is one of four black-type performers out of the seven-times winner Atlantic Destiny whose exploits in black-type company include a win in the Listed Sirenia S. and who is also the dam of the Listed Newmarket S. scorer Ocean War (GB) (Dalakhani {Ire}). Atlantic Destiny is a half-sister to the MGSW Make No Mistake (Ire) (Darshaan {GB}), while the third dam Treat Me Nobly is a half-sister to the G2 Waterford Crystal Mile hero and leading sire Be My Guest from the family of the GI Ladies H. heroine Ida Delia (Graustark) and the GI Strub S. winner Victory Speech. Atlantic Destiny’s youngest progeny is an as-yet unraced 3-year-old full-brother to the winner named Naishan (GB).