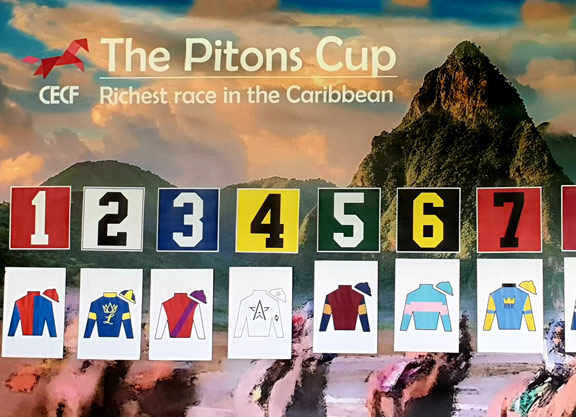 Following Saturday’s post position draw, a field of 10 is set to line up for the Dec. 13 Pitons Cup, which highlights the opening day of the Caribbean nation of St. Lucia’s first Thoroughbred racetrack, the Royal St. Lucia Turf Club. The race is modeled after the GI Pegasus World Cup with the 10 slots for the $150,000 event, which is the richest race in the Caribbean, purchased by individuals or groups from around the world, such as WinStar, Taylor Made and Newgate Farm.

The opening day card will also include the Helen of the West S., the Keeneland National Day Sprint S. and the UK Tote Winston Trim Memorial S., named for the St. Lucian horseman responsible for bringing racing to his homeland. All races will be run medication free.

“The DSH Caribbean Star Limited Pitons Cup is bringing the world to Saint Lucia and in turn, promoting

Saint Lucia to the world,” said Eden Harrington, Executive Director of the Royal Saint Lucia Turf Club. “Importantly, we are continuing to promote local participation and we are reserving one horse for the $20,000 Keeneland National Day Sprint and one horse for the $40,000 UK Tote Winston Trim Memorial

Trophy for local horsemen and local owners to be ‘owners for the day’. Be an owner for a day among a group of 10 for as little as USD1,000 each.”