Pioneerof the Nile Colt Lights Up Tote Board in Gotham 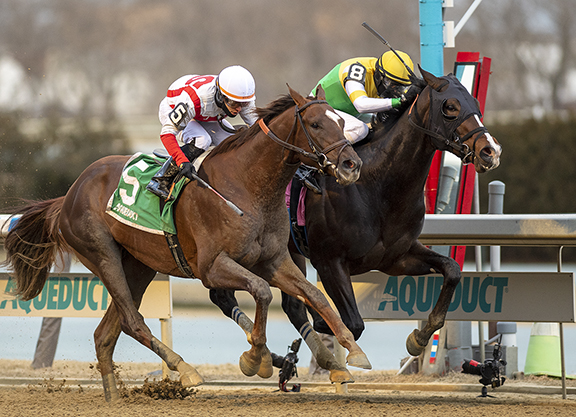 Chiefswood Stables homebred Weyburn (Pioneerof the Nile), last seen breaking his maiden going seven panels in the local slop Dec. 5, slipped past the bettors and into the winner's circle to post a 46-1 upset in Aqueduct's GIII Gotham S. He fended off Chad Brown trainee Crowded Trade (More Than Ready) to take the head bob, with that one's stablemate Highly Motivated (Into Mischief) a non-threatening third as the 4-5 chalk.

Away well from his outside draw, Weyburn locked on to California invader Freedom Fighter (Violence) through splits of :24.29 and :48.03. He challenged the pacesetter at the quarter pole as Crowded Trade looked like he would blow on by him out wider, but Weyburn dug deep to eek out the narrow and improbable victory and pick up 50 GI Kentucky Derby qualifying points.

Fifth sprinting in his Belmont debut in October, Weyburn sported first-time blinkers when second going seven furlongs here Nov. 14 before donning cap and gown in the slop while earning just a 69 Beyer Speed Figure. Perhaps his recent worktab on the Belmont training track signaled his readiness–it included a 1:00 1/5 bullet from the gate two breezes back Feb. 25.

“We thought he would like the distance, ultimately. His last two works were sensational,” said trainer Jimmy Jerkens, whose father, the legendary H. Allen Jerkens, won this event in 1992 with Devil his Due. “He went three-quarters in 1:13 and galloped out in 26 and change. I didn't mean for him to go that fast. But you don't worry about that when they're fresh and strong. He was going to have to do something like that to win a race like this. We had to ask him for something in the morning and replicate it in the afternoon.”

Jerkens, who did win the GI Wood Memorial S. in 2014, said of returning in that now Grade II final stepping stone for the

GI Kentucky Derby: “I don't know. We'll just take this all in. Of course it's a logical spot. It's right here. He's kind of a quirky horse. The pony man takes him every morning because he's tough and wants to wheel. He's still a little kid. He doesn't trust everybody. This is just really satisfying because it's been a tough winter and we loved him from day one. He didn't run first out and we didn't know what to think. Thank God we stuck to our guns. I think he'll end up being a decent colt.”

“His half-brother Yorkton was a fighter and Nipigon, his other half-brother, was a real fighter, too,” Landry said. “He looked like he really dug in hard in the stretch when it counted. He had every reason to give up.”

When asked about any potential Kentucky Derby dreams, Landry said, “We don't want to get too excited. We haven't nominated him to the Triple Crown because we were a little bit behind, but that doesn't stop us from supplementing him. If he earns his way there, he'll get to run there. There's still a long way to go.”

Pedigree Notes:
American Pharoah, Classic Empire, Cairo Prince, Social Inclusion, Thousand Words, and now Weyburn: not too many years have gone by recently without a major contender on the Derby trail by Pioneerof the Nile. The former WinStar stallion, who died unexpectedly two years ago this month at 13, has 35 black-type winners, including 15 graded, in his eight crops to race. The Empire Maker stallion's last full crop of 2-year-olds will race this year. Weyburn is a half-brother to MGSW and new Crestwood stallion Yorkton (Speightstown), as well as to Canadian MSP Nipigon (Niigon), with dam Sunday Affair last producing a live foal in 2019, a filly named Indy Champagne (Curlin). Sunday Affair, an unraced A.P. Indy mare who sold for $800,000 as a Keeneland September yearling, is out of a daughter of Sunday Silence from a four-year stint for her granddam, MGISW and Grade I stakes producer Maplejinsky, in Japan. The female family is one of the deepest in the North American stud book, with Maplejinsky's descendants including champion Sky Beauty (Blushing Groom {Fr}), as well as GISWs Take of Ekati (Tale of the Cat), Pleasant Home (Seeking the Gold), Point of Entry (Dynaformer), and Pine Island (Arch), and her immediate ancestors including the wonderful and prolific line of “Beauty” mares: Gold Beauty (Mr. Prospector), Stick to Beauty (Illustrious), and Hail to Beauty (Hail to Reason).