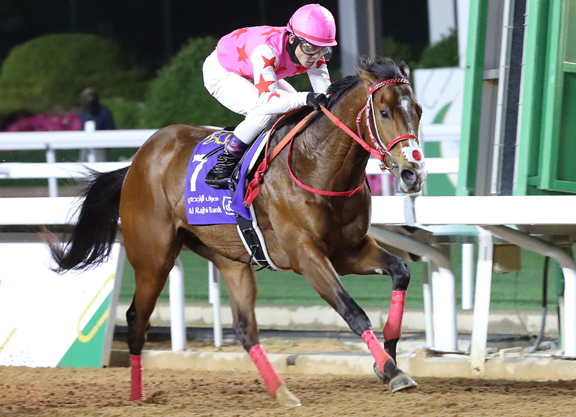 Making his first afternoon appearance on the dirt at career start number seven, Pink Kamehameha (Jpn) (Leontes {Jpn}) provided his home country and trainer Hideyuki Mori with a second victory in as many runnings in the Al Rajhi Bank Saudi Derby at King Abdulaziz Racecourse Saturday. Cowan (Kantharos) made up a stack of ground after blowing the break to just miss and won a photo for second from New Treasure (Ire) (New Approach {Ire}). Full Flat (Speightstown) won for Japan last year.

When entries were taken Saturday, Umberto Rispoli was named aboard Cowan, but when the Italian was pulled from his flight to Riyadh via Qatar Thursday, Joel Rosario was released from his call aboard Pink Kamehameha in order to ride for Steve Asmussen. Top Japanese rider Keita Tosaki, who was booked to ride Chuwa Wizard (Jpn) (King Kamehameha {Jpn}) in the Saudi Cup, picked up the ride and settled the colt about four off the inside as Godolphin's UAE 1000 Guineas heroine Soft Whisper (Ire) (Dubawi {Ire}) set the pace from UAE 2000 Guineas runner-up Meshakel (Ire) (Shamardal). Always traveling well for Tosaki, Pink Kamehameha claimed Soft Whisper with about 400 metres to race, but soon had New Treasure and Rebel's Romance (Ire) (Dubawi {Ire}) to deal with. But he managed to find a bit extra in the waning stages and got home first, as Cowan, last but one into the straight, closed with a rush.

“It was my first ride on him today but he produced a fantastic run even on his first time race over the dirt surface,” said Tosaki, who suffered serious injury and was sidelined for six months following a spill at Urawa in November 2019. “As he has no issues with the starting gate, he jumped quickly from the gate today. He responded to me well and had a comfortable trip all the way.”

Pink Kamehameha is one of 22 winners for his sire, a son of the aforementioned King Kamehameha (by Kingmambo) and Cesario (Jpn) (Special Week {Jpn}, by Sunday Silence), winner at home of the 2005 G1 Oka Sho and G1 Yushun Himba before winning the GI American Oaks at Hollywood Park. Cesario is also the dam of leading young Japanese sire Epiphaneia (Jpn) (Symboli Kris S) and 2019 champion 3-year-old colt Saturnalia (Jpn) (Lord Kanaloa {Jpn}). Pink Kamehameha is the last listed produce for his now 27-year-old dam.