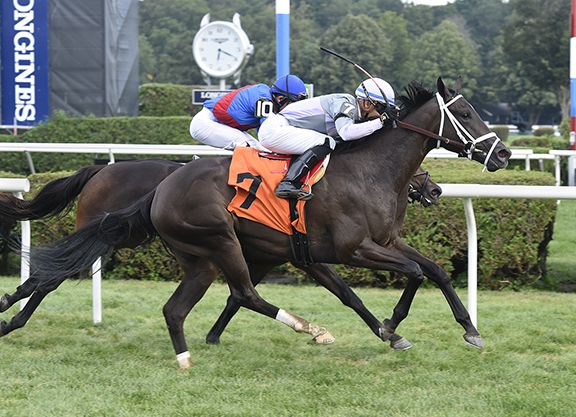 When the global pandemic propelled the world into chaos and uncertainty earlier this year, perhaps no industry group was impacted more by cancellations than New York breeders, who saw all three Saratoga-based auctions cancelled and who were forced to find other outlets for their stock. The up-and-down yearling sales season concludes with next week's Fasig-Tipton Kentucky October Yearlings Sale which features over 100 New York-breds, including four well-bred youngsters from Marty Zaretsky's Pine Ridge Stables.

“I would say, not as I would have liked,” Zaretsky admitted when asked to assess results from the yearling sales. “High-quality horses sold really well–I had one of my horses sell at Keeneland, a Ghostzapper, for $400,000. So I shouldn't say I'm disappointed, but I'm not excited about the sales. We didn't have the Europeans or the Asian buyers, so it was bad because of that. It's COVID and COVID has messed a lot of things up.”

Zaretsky will look to end the sales year on a positive note with his October sale quartet. All consigned by Paramount Sales, the group includes a filly by Street Sense (hip 325), a colt by Quality Road (hip 539), a colt by Gun Runner (hip 692), and a colt by Curlin (hip 1031).

“I have done fairly well in the past at the October sale,” Zaretsky said. “You want your horse to stand out and I'm hoping that's what will happen with the four of them in October.”

Zaretsky has a commercial broodmare band of 15 head at his upstate New York farm and, like his October yearlings indicate, focuses on sire power when making his mating plans.

“I think it's a bonus in New York-breds,” Zaretsky said of the sire power represented in his operation. “The stallion population in New York is mediocre. As a breeder, if you want to bring up the quality of horses to be in graded races, high-end stallions are the way to go with New York-breds. And there are a lot of opportunities at the track when they are New York-breds. Look, a New York-bred [Authentic {Into Mischief}] just won the Derby.”

Parlaying sire power into the sales ring, Zaretsky explained, “The hope is that you can sell for three times the cost of the stallion when you get into those realms. If you look at the averages for Into Mischief, [the stud fee is] $100,000 and their [yearling] average is over $400,000. So a three-time factor is a decent amount because to feed and take care of them is the same for a $5,000 mare or a $100,000 mare.”

He continued, “But you need the quality of the mare to hold it. You need a lot of black-type in its bloodlines. Whether it's a runner or a producer or a daughter of a producer. Our Curlin that is in the October sale is a 3/4-brother to Connect. We bought the dam with a Candy Ride (Arg) in her belly absolutely with the thought of breeding her to Curlin after she foaled because of the bloodlines and the nicks to Connect.”

Hip 1031 is out of Whisper Wisdom (Rockport Harbor), a half-sister to GI Cigar Mile H. and GII Pennsylvania Derby winner Connect (Curlin). Zaretsky purchased the mare for $275,000 at the 2017 Keeneland November sale.

The Curlin yearling will be making his second trip through the sales ring next week after RNA'ing for $255,000 at the Fasig-Tipton Selected Yearlings Showcase in September. The youngster was offered during the auction's opening section of New York-breds, which was in the unenviable position of leading off the entire yearling sales season.

Zaretsky's highest-priced yearling this year was a filly by Ghostzapper (hip 242) who sold for $400,000 to Mike Pegram, Paul Weitman, and Karl Watson. The yearling is out of multiple stakes placed Lady of the Nile (Pioneerof the Nile), a mare Zaretsky purchased for $100,000 at the 2015 Keeneland November sale. Her first foal, the 3-year-old Chocolate Cookie (Declaration of War), is now two-for-three following a Belmont allowance win at the beginning of the month.

Zaretsky offered a filly by Into Mischief out of Indian Rush (Indian Charlie) at the Keeneland sale, but bought her back at $140,000. He re-routed the filly to last week's Ocala Breeders' Sales Company's October Sale where she brought the auction's second-highest price of $200,000.

“I sent her to that sale to stand out,” Zaretsky said. “There were a lot of Into Mischiefs in Kentucky in the October sale and I think she was the only Into Mischief in Florida. Florida has a tendency to like New York-breds also. So I sent her with Stuart Morris and it was a good result.”

Zaretsky purchased Indian Rush for $80,000 at the 2012 Keeneland January sale and sold an Into Mischief colt out of the mare for $750,000 to Shadwell Estate Co. at the 2017 Keeneland September sale. She is also the dam of stakes winners Harlan's Honor (Harlan's Holiday)-whose first foal is already stakes-placed–and March X Press (Shanghai Bobby).

Of his success with the family, Zaretsky said, “It's fabulous. You dream to take a horse that has potential and to have the horse deliver black-type. It's very exciting. Indian Rush has an Into Mischief by her side. He's beautiful, looks exactly like the one I sold for $750,000. So I'm pretty excited about next year with him.”

Zaretsky's plan is to sell all his foals, but he is content to pick and choose the best time to offer his stock.

“I'm not going to let horses go for nothing,” he said. “You've got to believe in what you're doing. I am in the business of breeding and selling and if I don't feel I'm getting adequate money, I'll go to the 2-year-old sales.”

The Brooklyn native also has a pair of 2-year-olds set to go racing with trainer Linda Rice.

Zaretsky began breeding horses in partnership with Dr. Jerry Bilinski of Waldorf Farm decades ago before eventually deciding to take over sole ownership of his breeding operation.

“I was big into horseback riding,” he explained of his first foray into the breeding industry. “I used to go in the foxhunts. I was going to retire one of my horses and breed her, but my friend Dr. Bilinski said, 'Why would you go and breed a horse just to have a baby because you love the horse. If you want to breed horses, go buy yourself a mare in foal or a mare you could breed and at least get some economic reward. So I went out and I bought a mare in foal. I think it was $5,000 at the time-this was over 20 years ago-and I sold that yearling out of her for $22,000. Then I partnered with Jerry for at least 10 years. We had a lot of horses together and we did well. Eventually I said, 'I think I'd like to do it on my own.' I wanted to make my own decisions, my own economics at my own farm. He's still my friend, but I do everything alone.”

Zaretsky, whose primary business is in consumer packaging for cosmetics and pharmaceuticals, generally splits his time between New York city and his upstate farm. But he has been harboring upstate since the outbreak of the pandemic in the spring.

“I still live in the city, but I have the farm upstate,” he said. “I used to spend half a week in the city and half a week upstate, but I've been upstate since Mar. 12. It's fun seeing the horses every day. It is really a pleasure.”

He continued, “I have 13 weanlings at my farm now in New York-two Empire Makers, an Uncle Mo, I have a Pioneerof the Nile and two Into Mischiefs.”

Despite the ups and downs of 2020, Zaretsky is planning to continue to pursue sire power in his 2021 matings.

“Some of the horses that are perhaps not producing, I'll breed down because of the virus,” Zaretsky said. “I do have a contract for Into Mischief for one of my horses already and I think I'll go to American Pharoah with another mare. We'll see how we go. The good news is a lot of farms are lowering their fees to make up for the way the industry is going. It takes a lot of the pressure off for spending all of our money with the results not being what we hoped. The virus is not gone, the tracks are not open yet, per se, so you have to be somewhat cautious and they still need numbers. If you can breed to a stallion for $50,000 who was $75,000 last year, it gives you a lot more flexibility in overhead.”

The Fasig-Tipton October sale will be held next Monday through Thursday at the company's Newtown Paddocks in Lexington. Bidding begins each day at 10 a.m.