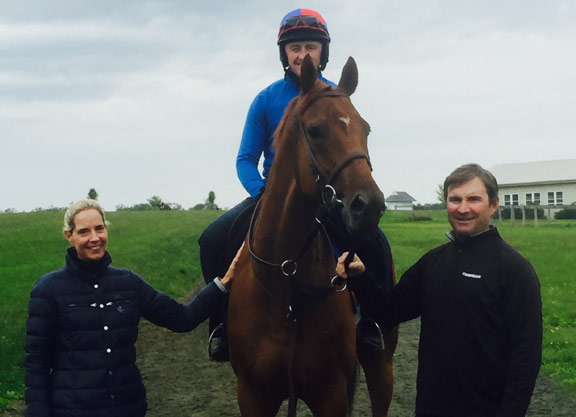 “Phillip and his wife Evie are close friends with Graham and Anita Motion,” said West Point Thoroughbreds President Terry Finley. “At the Thoroughbred Makeover this past fall, Graham mentioned to my daughter Erin that Phillip really likes racing and would love to be involved with a horse like Ring Weekend. We made it happen and are honored to have such a well-respected, successful rider as a part of the West Point family. He’s the Angel Cordero of the eventing world. Phillip has campaigned several Thoroughbreds at the highest levels of the sport and shares our commitment to providing retired racehorses with second careers.”

An Australian native, Dutton is based out of West Grove, Pennsylvania and is a dual Olympic and Pan American gold medallist, who has also won the most prestigious eventing competition in North America, the Rolex Kentucky Three-Day Event. One of the Thoroughbreds he competes with is MSW Icabad Crane (Jump Start), who Motion campaigned to a third in the 2008 GI Preakness S. and now owns with his wife.

“I spend a lot of time traveling and competing, but like to spend time at Fair Hill with Graham whenever I can,” said Dutton. “It’s really neat to be involved with a horse of this caliber trained by Graham. I’ve worked with a number of Thoroughbreds over the years and this is a great opportunity to get to know more about racing.”