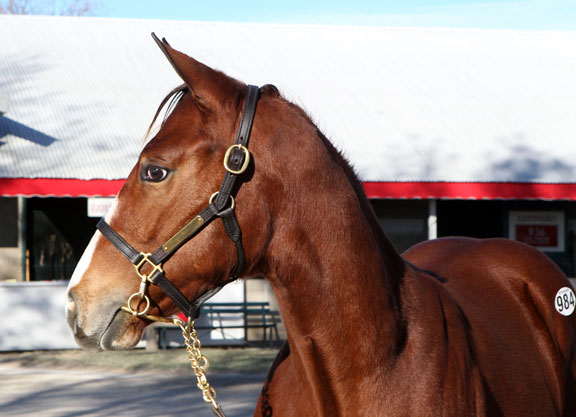 Well-regarded first-time starters from the Bob Baffert and John Sadler barns highlight this turf sprint early on Friday’s card at Santa Anita. J Z MY MAN (American Pharoah) commanded $410,000 at Fasig-Tipton Gulfstream last spring following a :10 3/5 furlong breeze and has backed up that pricetag in the mornings for Baffert, showing a steady series of sharp works going back to late December capped by a best-of-219 bullet half in :47 3/5 Mar. 16 at Santa Anita. His dam, four-time stakes winner J Z Warrior (Harlan’s Holiday), is a half-sister to GISW A Z Warrior (Bernardini), MGSW/GISP Jojo Warrior (Pioneerof the Nile) and GSW/GISP E Z Warrior (Exploit).

Duplicity (Into Mischief), going out for the powerhouse tandem of Sadler and Hronis Racing, was a coveted auction buy in his own right, hammering for $350,000 at OBS March last year after blitzing through a furlong in :9 4/5. The first foal out of once-raced Hysterical (Distorted Humor), his second dam is MGISW turfer Tout Charmant (Slewvescent), who in turn produced GSW/GISP Dancing House (Tapit). Tout Charmant is also the second dam of last fall’s GII Sands Point S. heroine New and Improved (Cairo Prince). While not as swift as J Z My Man’s worktab, Duplicity shows eight stamina-building five-furlong moves in Arcadia, including one from the gate in 1:00 3/5 (9/63) Feb. 23. TJCIS PPs