'Pharoah' Gets His Group 1 in February S. 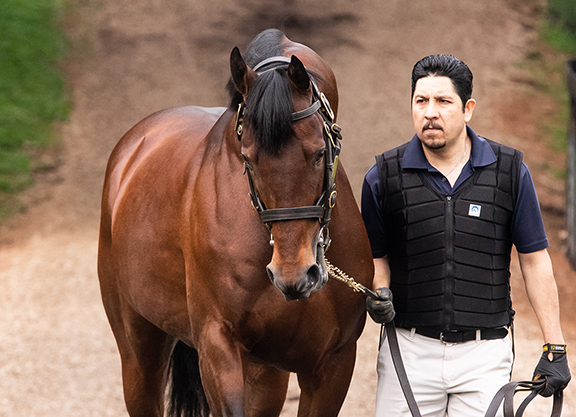 Café Pharoah delivered a first win at the highest level on dirt for his sire, U.S. Horse of the Year and Triple Crown winner American Pharoah, in the G1 February S. going a mile over the Tokyo dirt on Sunday. His three-quarter length victory guaranteed him a spot in the starting gate in the GI Longines Breeders' Cup Classic this fall.

Favoured at 2-1, the 4-year-old entire settled in a tracking fifth, as Wide Pharoah (Jpn) (Henny Hughes) and Air Almas (Majestic Warrior) slugged it out on the front end. He emerged a clearcut third as noses pointed for home, and swung out to make his challenge 400 metres from the wire.

Conservatively handled to that point by jockey Christophe Lemaire, a trio of right-handed taps kept the Koichi Nishikawa colourbearer's mind on business with a furlong to travel as he passed Air Almas, and he held safe the late rush of 27-1 shot Air Spinel (Jpn) (King Kamehameha {Jpn}) to win with ears pricked. Wonder Lider (Jpn) (Statue of Liberty) closed from midfield to take third, another 1 3/4 lengths behind. Second favourite Arctos (Jpn) (Admire Aura {Jpn}) never threatened and checked in ninth.

“His condition was super, and I had confidence already at the paddock,” said Lemaire. “We decided to use cheek pieces hoping for a more aggressive performance. His start was good, we were positioned well and he responded beautifully. The colt has such high potential. I had no doubt that he could land a Group 1 win if he gave his best. I'm happy that it all worked out today.”

A winner going 1800 metres at Nakayama in December of 2019, his only race at two, Café Pharoah added the Listed Hyacinth S. last February and June's G3 Unicorn S., both at Tokyo. Only seventh in sloppy going in the Listed Japan Dirt Derby at Oi on July 8, the bay rebounded with another victory in the G3 Sirius S. facing elders last fall. He ran sixth in the G1 Champions Cup in his final start of 2020.

Pedigree Notes
Bred by the late Paul Pompa, Jr. in Kentucky, the winner is the second at the highest level out of American Pharoah's first crop after GI Queen Elizabeth II Challenge Cup victress Harvey's Lil Goil. The Ashford Stud resident has already celebrated a Group 1 winner from his second crop with G1 Criterium International scorer Van Gogh. The trio are among 14 black-type winners for the Coolmore sire, while five other progeny have placed at the highest level so far.

Selected out of the OBS March Sale for $475,000 after breezing a quarter mile in :21.1, Café Pharoah is one of three group/graded winners for his two-time graded scoring dam and the second male after Giant's Causeway's Night Prowler. The colt is also the first Group 1 winner for Mary's Follies, who was trained by the late John Forbes before Pompa acquired her. The mare's 2018 Uncle Mo colt died, while she has colts of 2019 and 2020 by Candy Ride (Arg) and Connect, respectively. A granddaughter of four-time stakes winner Wave to the Queen (Wavering Monarch), she aborted to Curlin for this spring.

In early January, Mary's Follies (lot 725) was knocked down for $500,000 to BBA Ireland as part of the Pompa Dispersal during the Keeneland January Horses of All Ages Sale. Her daughter, MGSW and 'TDN Rising Star' Regal Glory (Animal Kingdom) (lot 403) sold earlier in the day for a co-sale topping $925,000 to Peter Brant's White Birch Farm, which races both Stateside and in Europe and won the G1 Prix de l'Arc de Triomphe with Sottsass (Fr) (Siyouni {Ire}) in October.