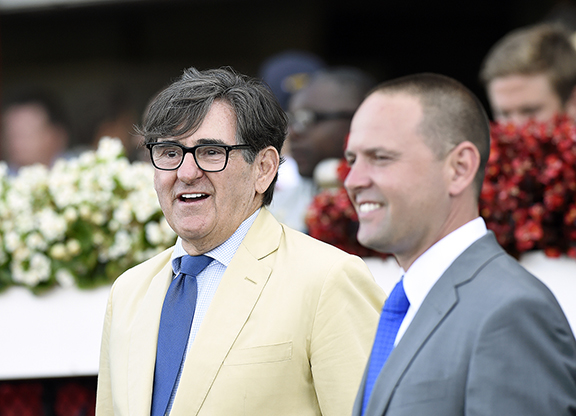 Peter Brant has owned many good horses over the years, but never one that he held in higher regard than Sistercharlie (Ire) (Myboycharlie {Ire}).

In a wide-ranging interview as the Green Group Guest of the week on this week’s TDN Writers’ Room podcast, Brant said that he wanted Sistercharlie to campaign next year because finding a horse of that caliber is difficult.

“Because she basically has only run 15 or 16 times and she is a very special horse, at least in my lifetime, the most special horse,” Brant said when asked why Sistercharlie will race next year. “I figured the chance of getting another one that’s sound and ready to race another year, it’s just not going to come along very often, if ever again. So, I just decided that’s what I wanted to do. I think everybody enjoys watching her run, and most of all me, so I guess it was just a decision that I made with my family, and with Chad (Brown), and we’re very delighted that she’s going to be around for another year. Hopefully, she does very well.”

Brant also touches on his purchase of Payson Park and his plans for that facility in the podcast.

“We have improved that turf course a lot,” he said. “We put rails up, and have new cutting equipment, and new harrows for the race track, for the dirt track. We think it’s a great training facility. I knew George Oliver very well and he was part of building that, along with Michael Phipps, and Mr. Chenery, and Bull Hancock. It’s got such a great history and it got a little rundown but nothing that some tender care can’t improve. We’ve worked on the quarters for the grooms, and people that are living there that work at Payson. We’ve improved that, and we’re starting to improve some of the barns and hopefully, our goal is to make it a cooperative to the trainers that are there. We’re working on that, and think that’s the best future for it.”

Click here to listen to the podcast, or go to Apple podcasts, search for the TDN and subscribe in order to be notified when a new podcast is posted.