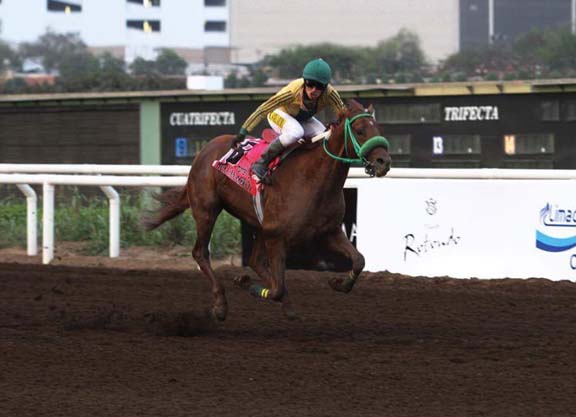 Huracan Americo (Drosselmeyer), who broke his maiden in Peru’s G1 Derby Nacional while facing older Southern Hemisphere foes last November, arrived at Gulfstream Park Sunday after exiting quarantine in Miami a day earlier to begin preparations for a crack at the May 6 GI Kentucky Derby.

Owner Oscar Pena of Stud Dona Licha and trainer Arturo Morales have penciled in the Mar. 4 GII Xpressbet.com Fountain of Youth S. at Gulfstream Park and the Mar. 11 GII Lambholm South Tampa Bay Derby as possible initial targets with a further eye towards the Apr. 1 GI Xpressbet.com Florida Derby. Dante Zanelli is handling training duties while Huracan Americo is stabled in the U.S.

Stud Dona Licha contract rider Carlos Trujillo, Peru’s leading jockey, is expected to fly in for the assignment, according to Pena, who visited the colt in Miami Saturday.

“He looks good. It doesn’t appear he has lost much weight. We are excited,” said the principal of Stud Dona Licha, one of Peru’s leading stables.

Huracan Americo placed fourth in a field of nine in his first career start over 6 1/2 furlongs Sept. 25 at Hipodromo de Monterrico. He followed that with an impressive 2 1/2-length victory in the 11.93-furlong G1 Clasico Derby Nacional (Peruvian Derby), the Quadruple Crown third leg as the 13-horse field’s lone Northern Hemisphere 2-year-old.