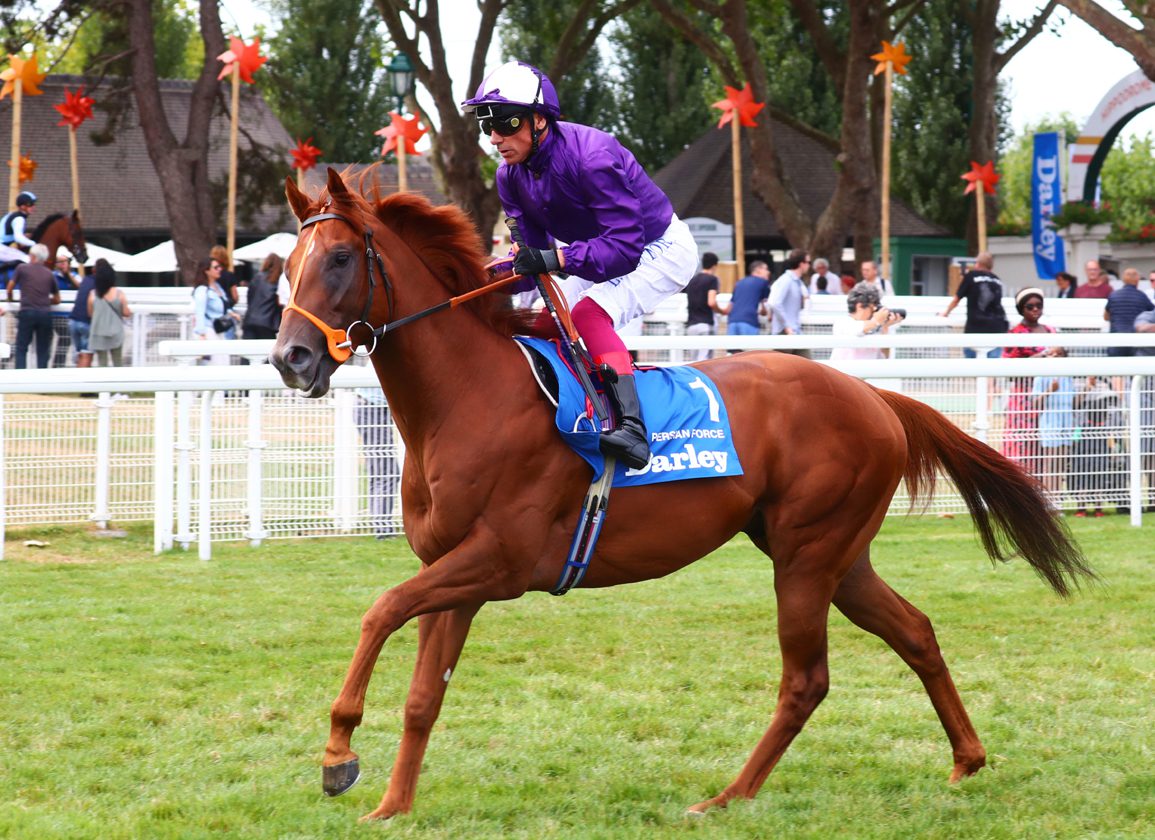 Less than a week after his owner Kia Joorabchian announced that leading juvenile Persian Force (Ire) would be retired to stud, Roger O'Callaghan confirmed that the Group 2-winning speedster would be heading back home to Tally-Ho Stud, where he will stand alongside his father Mehmas (Ire) in 2023.

Tally-Ho snapped up Persian Force at the November Foal Sales at Goffs in 2020 for €75,000 from Ringfort Stud before selling the colt the following year at the Orby Sale to Peter and Ross Doyle for €225,000.

Last seen finishing a gallant fourth in the GI Breeders' Cup Juvenile Turf, Persian Force won three of his eight starts for Richard Hannon, with the clear highlight coming when he landed the G2 July S. at Newmarket in good style.

That effort came off the back of a smart second to Bradsell (GB) (Tasleet {GB}) in the G2 Coventry S. at Royal Ascot. Persian Force also placed three times at the highest level, including when narrowly beaten by Blackbeard (Ire) (No Nay Never) in the Prix Morny at Deauville.

“He was bought by a very shrewd judge in Ross Doyle at the Orby and was a very good horse from start to finish with Richard Hannon, who did a brilliant job with him. He showed his class when winning the G2 July S. at Newmarket and I think breeders will be keen to use him. We haven't decided on a fee yet.”

Persian Force retires to stud with £289,012 in career earnings under his belt and a rating of 112. When revealing the news on Sunday that the colt would be retired this season, Joorabchian said that Persian Force compared favourably to Mehmas, who has emerged as one of the leading sires in Europe after beginning his career at Tally-Ho at €12,000. He will stand for €60,000 next year.

Speaking on Luck On Sunday, Joorabchian said, “He's followed the footsteps of his father, he's done everything Mehmas has done.

“Arguably, according to Richard Hannon, who trained both, he's a better looking version of his father and he's got a better pedigree. He started in March and ran in everything.”

He added, “He's never had a bad run, he's followed the footsteps of his father from start to finish and his father retired at the end of his 2-year-old career and has had a fantastic career in stud as a stallion.

“His father will stand at €60,000, so looking at that he can definitely follow in the footsteps of his father, if not better, because your son is always better than you.”