Performer Rises To The Occasion in the Discovery 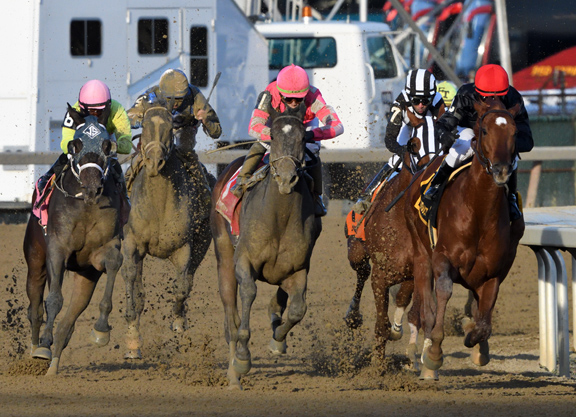 Saturday’s GIII Discovery S. at Aqueduct featured an intriguing matchup between the more-seasoned Tax (Arch) and Phipps Stable and Claiborne Farm’s exceptionally progressive Performer (Speightstown). The two talented sophomores put a country mile between themselves and the rest of the field through the final eighth of a mile, with Performer’s never-say-die attitude winning out in the finish.

Ridden for some speed by Joel Rosario, Performer took the Discovery field at the midpoint the first turn, but he was content to allow Panamanian sensation Carlos L. (Hold Me Back) to roll forward to take up the running turning up the backstretch. Grumps Little Tots (Sky Mesa) was also ridden along from a three-wide perch to be in touch passing the midway point. Kept within a length of Carlos L. entering the final half-mile, Performer was allowed to stride into the lead with three-eighths of a mile to the finish, but Tax was threading his way through between horses with a menacing run, looking all over a winner as they reached the quarter pole. Performer turned in front and led narrowly into the final furlong and try as he might, Tax–giving Performer four pounds under the conditions of the race–could not quite get by a very game winner.

“He trained really, really well coming into it and I thought it was a really good race and performance for him,” said trainer Shug McGaughey, who last won the Discovery with Cynthia Phipps’s Gold Fever (Forty Niner) in 1996. “[Jockey] Joel [Rosario] gave him a good ride and he was in perfect position all the way around. For him to have something left at the end to battle and pull away showed his ability.”

A debut third at this track last November, Performer broke his maiden on seasonal debut at Belmont June 29. A one-length allowance winner at Saratoga Aug. 24, he most recently stretched to Belmont’s 8 1/2-furlong trip and ran his streak to three with a 1 3/4-length tally over Grumps Little Tots.

Performer, who bears a striking resemblance to former Phipps star Easy Goer, is the 111th black-type winner and 51st graded winner for Speightstown. Performer is the most recent foal from his dam, runner-up in the 2009 GII Demoiselle S. and a daughter of GSP On Parade, the dam of Parading (Pulpit), a graded winner on turf and synthetic, and also of the dam of Japanese listed winner Madras Check (Malibu Moon). His MGISW third dam My Flag, a daughter of the aforementioned Easy Goer, produced Eclipse Award winner Storm Flag Flying and is herself a daughter of undefeated legend Personal Ensign (Private Account).