Home » Archive » Europe » Perelle: The Passion of the Pursuit

Perelle: The Passion of the Pursuit 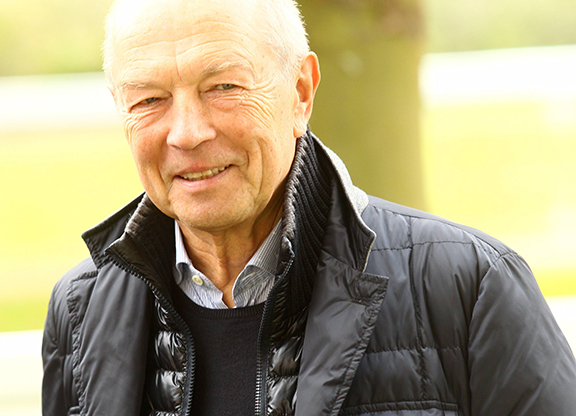 At the root of the vast economic machine that is the global horse racing business rest some simple maxioms: Breed the best to the best. My horse is faster than your horse.

Sometimes, just when you’re feeling a little bit like Charlie Brown in his Christmas special–overcome by the commercial aspects of the thing– you’re reminded of what’s at the heart of the matter through an operation whose goals hint at that purity of the pursuit.

“I was always more interested in breeding,” said Jurgen Winter, the owner of Haras de la Perelle, which offers three colts this week in the selected sessions of the Arqana August Sale, including hip 160, a Dubawi (GB)-Giofra (GB) colt who is generating significant pre-sale buzz. “Certainly racing is the goal of breeding, but breeding was always my main interest. I like horses. I always loved horses. I love the environment. I love to look out of the window, see my horses in the paddocks, to choose the stallions, see the foals born, see how they grow up, and that’s my main interest. I love to go to races, but breeding is what I’m really very much interested in.”

Perelle topped the Arqana August sale in 2011 with a daughter of Galileo (Ire), Flight to Fancy (GB), who brought €1.7 million.

Winter is a native of Baden Baden, Germany and is the principal shareholder in the women’s outerwear company Betty Barclay, a global brand. He established the farm in 1995, a few years after he started buying mares in France.

“I chose France because I thought it was the country in Europe, outside of Ireland and England, which was the most interesting in terms of breeding, climate and the structure that there is in France, which is very developed. Whereas in the area where we live in Germany, there is not a comparable structure.”

Winter bought his first mare in 1989 and boarded her at Haras du Logis, then owned by the Bozo family. When he bought a second home in Normandy and discovered that neighbors were planning to sell an adjoining cattle farm, the time seemed right to start his own operation.

“I bought it to make sure that nobody would take it and do something I wouldn’t like with it,” he said. “I had around 40 hectares, so I decided to build the stud to take the first mares I had at Haras du Logis.”

Perelle started with 24 boxes on those 40 hectares and has since added adjoining parcels of land to reach the more than 100 hectares it comprises today, with 80 boxes, in Bonnebosq, France, about a half-hour south of Deauville.

Winter said his goal was to keep around 30 top-quality mares and breed them to a mix of proven stallions and promising youngsters. They keep the fillies to go into training with the hope that they will be successful enough to come back to the farm to be bred, and sell the colts.

From the limited numbers the farm has produced, the numbers have been impressive: since 2010, they have turned out four Group 1 winners from fewer than 15 foals per year (and five since 2006), and were the seventh-leading breeder in France in 2015.

One of those Group 1 winners is Giofra, the champion older horse of 2012 in England, winner of the G1 Falmouth S., the G2 Prix d’Harcourt, and G1-placed on four other occasions. Her first foal is Georgine (GB), an unraced 2015 Frankel filly, in training in France. She has a Galileo colt at her side.

Hip 160, the Dubawi colt, is “our star yearling,” according to Winter. “I always liked Dubawi,” he said. “I have used him from the beginning. And this colt is truly magnificent. He is well in his head, walks well, and is truly exceptional.”

The farm also offers hip 163, a colt by first-season sire Kingman out of the Listed-placed daughter of Montjeu, Gradara (GB), from the family of Giofra, and also selling Sunday; as well as hip 185, a Makfi (GB)-Kyurem (Ire) colt, on Monday.

Perelle has a reputation for eschewing the hothouse yearling trend, and raising its horses naturally. The reputation is earned deliberately, said Winter.

“I try to raise horses the most naturally possible,” he said, adding that the farm does not take on outside clients, but raises and breeds its own. “I don’t follow the style for precocity and sprinters. I’m trying to raise sound, natural horses, and I’m not investing in a short-term business. Today, everybody wants to have precocity, speed, and so on. I think a horse naturally runs 1600, 2000, 2400, 2800 meters. I’m not so glad that the style is turning towards sprinting. I don’t think it’s the best thing. Yes, people want to see their horses run; that’s understood. But as a breeder, I see success as a long-term goal. You must give time to a horse.”

In addition to Giofra, these methods have produced the G1 winners Gentlewave (Ire), Reggane (GB), Mille et Mille (GB), High Jinx (Ire); along with 16 individual Group 2 and 3 winners, and around 20 Listed winners.

Winter owns shares in some top stallions and younger up-and-comers, the sort of mix to which he likes to breed his mares-including Le Havre (Ire), Siyouni (Fr) and Wootton Bassett (GB) in France, and Maxios (GB) in Germany.

Asked about his goals for the future of Haras de la Perelle, he said, “I want to keep the stud on a high level. We have been in the top 10 breeders in France several times, so the goal is to be there perhaps every year, to be among the 10 best breeders in France.”

But more intrinsically, what he said he really wants to do is to consistently produce the best horses he can.

“To breed good horses, to constantly breed horses who can run on a high level, that’s the goal. Certainly if they sell well, that makes the business run. That turns the machine. It’s easy to throw money out the window, so it’s a goal to make some money. That’s normal. But to see the horses winning races and big races, even if they’re sold and they run for other owners, that makes a breeder very happy.”