Pennsylvania Breeders Reeling But Determined to Fight Back 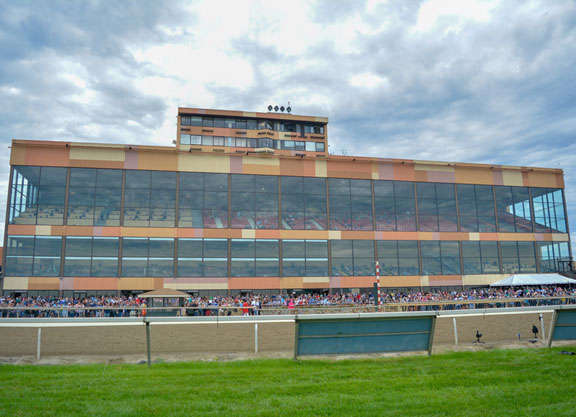 The grandstand at Parx | Horsephotos

A day after receiving the potentially devastating news that as much as 80% of the slots money that goes to purses in the state of Pennsylvania may be diverted elsewhere, leaders of the state's breeding industry began to plot a campaign that they hope will convince politicians that the industry must be protected.

Tuesday, Pennsylvania Governor Tom Wolf unveiled a budget proposal which called for $204 million to be taken out of the Race Horse Development Fund and diverted to a program that would provide college scholarships for Pennsylvania residents. About 88% of purses paid at the Pennsylvania tracks comes from slots revenues. Should Wolf succeed in steering the money away from racing, many believe that the breeding and racing industries in the state will not survive.

Brian Sanfratello, the executive secretary of the Pennsylvania Horse Breeders Association, called on everyone who works in Pennsylvania racing to reach out to their legislators and explain the devastation the potential purse cuts could bring. Perhaps the most effective argument the Pennsylvania racing and breeding industries has is that the slots money was placed into a trust in 2017, which was supposed to be a guarantee that the money was untouchable.

“We don't believe the governor should be able to break that trust agreement,” Sanfratello said. “This is not about higher education. This is about the $1.6 billion in economic impact that the racing industry brings into Pennsylvania. This is about hundreds of thousands of acres of open space in Pennsylvania. I don't know how you give higher education money by putting 20,000 of these young people's parents out of work. We're going to do whatever is necessary to make sure this does not happen.”

Not surprisingly, farm owners reported that they were getting flooded with phone calls from people questioning whether or not they should breed in Pennsylvania this year.

“My phone has been ringing off the hook,” said WynOaks Farm operator Barbara Wheeler. “Our clients want to know what is going to happen to the program.”

“People are letting me know they are concerned,” he said. “They say they might as well stay where they are because there are no benefits right now to breed in Pennsylvania. There is nothing to encourage them to come. They're looking at four years down the road when these horses will be 2-year-olds and are ready to race and they worry that there might not be anything there for them.”

That Wolf, a Democrat, asked that $204 million comes out of the Race Horse Development Fund does not mean that it is going to happen or that the hit won't be less. The deadline for approval of the budget is July 1, which gives the industry and their lobbyists time to negotiate a better deal. They will no doubt appeal to members of a Republican-controlled legislature, which must sign off on the governor's budget. The horse racing industry could wind up victorious, but not until a point in time when the breeding season is over. By that time, it may be too late to salvage the 2020 breeding season.

“Breeding season starts in two weeks and here is another threat to our livelihood,” said Boggs Shoemaker, who operates Timber Ridge Farm. “Before this happened, Pennsylvania was the place. Not now. This was a sucker punch to the gut and it doesn't give you a good feeling about what's going to happen in the next few years. It takes so much time and effort to get a horse from the in-utero stage to the track. Then when you add in the threat that there might not be anything out there for these horses in three or four years, what are people going to do? My head tells me I should just pack it in. But I will keep going because of my passion.”

One of the bitter ironies of this situation is that the Pennsylvania breeding program was on an upswing after some lean years that revolved around a 2017 raid of the fund by then-Governor Tom Corbett. When the industry got the politicians to agree to put the money into a trust it was believed that never again would a politician try to take away racing's slot money. Bucking a nationwide trend, the number of mares bred in Pennsylvania in 2019 was 686, an increase of 12.5% over 2018. It was the third straight year that the number of horses bred in Pennsylvania has increased.

“In politics, nothing is ever as it is presented,” said Wheeler.

She said Northview has options that other farms don't have because they also have a facility in Maryland and can transfer everything there. But that's not what she wants. She wants the Pennsylvania breeding industry to survive this setback. Everybody does. Yet, everyone is preparing for the possibilities that $204 million will be leaving the industry, a crippling blow for racing and breeding.

“Here we go again,” Boggs said. “We've seen this how many times in the past? You have the arrogance of this governor and the failure on his part to realize the impact his words and actions have on this industry. It's devastating. It's disgusting.”