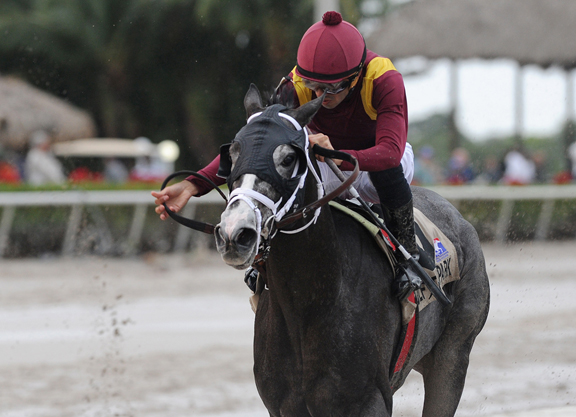 Bearing in mind that sons of Tapit landed the 2014 and 2016 editions of the GI Belmont S., with others finishing second in 2015 and third in 2016, it would seem fair to conclude that the three-time champion sire is a reliable source of stamina. It must therefore sound very contradictory to harbor a few stamina doubts about any of his sons which emerge as possible contenders for the two-furlong-shorter GI Kentucky Derby.

However, as the Belmont is America's only GI dirt race over a distance as long as a mile and a half, it has become something of a paradox. Two of the Tapit colts which ran well in the Belmont–the 2014 winner Tonalist and the 2015 runner-up Frosted–later became Grade I winners over a mile. It is also worth looking at the record of Tapit's past contestants in the Kentucky Derby. Seven of his sons have bid for classic glory at Churchill Downs (Hansen, Normandy Invasion, Tapiture, Frosted, Mohaymen, Lani and Creator), their best efforts being the fourth places achieved by Normandy Invasion, Frosted and Mohaymen.

It's a fact that Tonalist and Creator rank among a relatively small number of Tapit's black-type winners which have won at a mile-and-a-quarter or more. They are joined by Careless Jewel (GI Alabama S. over a mile and a quarter), Headache (GII Hawthorne Gold Cup over a mile and a quarter), the turf mare White Rose (GIII Glens Falls S. over 1 3/8 miles) and Scuba (a graded winner over 1 1/2 miles and 1 3/4 miles as a 5-year-old). There's also Closing Bell (Dueling Grounds Derby) and Testa Matta (Japan Dirt Derby). That adds up to quite an impressive collection, but it mustn't be forgotten that they come from a total of 94 black-type winners by the Gainesway star.

Last year I wondered about the stamina potential of Cupid after his victory in the GII Rebel S. over 1 1/16 miles, and he didn't venture beyond a mile and an eighth. Now I am wondering about Tapwrit, even though he now ranks second in the Kentucky Derby points race following his triumph in the GII Tampa Bay Derby. I would be the first to admit there was nothing in the style of the colt's success that suggests a shortage of stamina–he relaxed well and finished strongly–but his pedigree raises the odd doubt.

These doubts stem from the records of his dam Appealing Zophie and her sire Successful Appeal. Appealing Zophie will be remembered as one of the best juvenile fillies of 2006, when her Experimental weight of 118 was bettered only by Dreaming of Anna and Octave, the first two in the GI Breeders' Cup Juvenile Fillies, and by Cash Included, winner of the GI Oak Leaf S.

Appealing Zophie had earned her high rank with a wire-to-wire success in the GI Spinaway S. over seven furlongs, after which she finished fourth in the Juvenile Fillies and second in the Delta Princess S. She confirmed that she stayed 1 1/16 miles when she landed the GIII Silverbulletday S. early in her sophomore season but by the summer she was competing over six furlongs.

Successful Appeal also made the occasional foray over distances of a mile or 1 1/16 miles, notably winning the GII Withers S. over a mile. However, it was at around six furlongs that he won four other Graded stakes, at the ages of two, three and four.

Of course, having a winner over sprint distances as your broodmare sire has been no obstacle to success in the Kentucky Derby, as we have seen with such as Smarty Jones (out of a mare by Breeders' Cup Sprint winner Smile), Barbaro (out of a daughter of Carson City), American Pharoah (dam by Yankee Gentleman) and Nyquist (whose broodmare sire is the GI King's Bishop S. winner Forestry). It must also be in Tapwrit's favor that Successful Appeal's first crop (sired while he was based in Florida) contained Closing Argument, a speedily bred colt who went close to landing the 2005 Kentucky Derby.

To get back to Successful Zophie, she is out of a daughter of Hawkster–something she shares with 2005's champion three-year-old colt Afleet Alex, who landed the Preakness and Belmont after finishing third in the Kentucky Derby. Although these two Grade I winners represent just about the sum total of Hawkster's success as a broodmare sire, he did better in this role than he did as a sire. A Grade I winner over a mile and a half on turf, Hawkster managed to sire only three black-type winners among his 272 foals.

Tapwrit's third dam Sodeo Sodeo was an unraced three-parts-sister to the GI Florida Derby winner Croeso and she also had three grandparents in common with the Grade I 2-year-old winner Slewpy. Sodeo Sodeo was by Seattle Slew and therefore creates 4 x 4 inbreeding to the 1977 Triple Crown winner.

As you'd expect, Tapwrit is by no means the first good winner by Tapit with two lines of Seattle Slew. It is arguably in Tapwrit's favor that two others with 4 x 4 inbreeding are Frosted and Headache, both of whom rank among Tapit's better stayers. Another is Concorde Point, winner of the GII West Virginia Derby over a mile-and-an-eighth. There are also two good fillies inbred 4 x 3 to Seattle Slew, but these two–Touching Beauty and Dancing House–respectively gained their Grade II successes over a mile and seven furlongs.

Hopefully we will get a clearer view of Tapwrit's potential next time out.