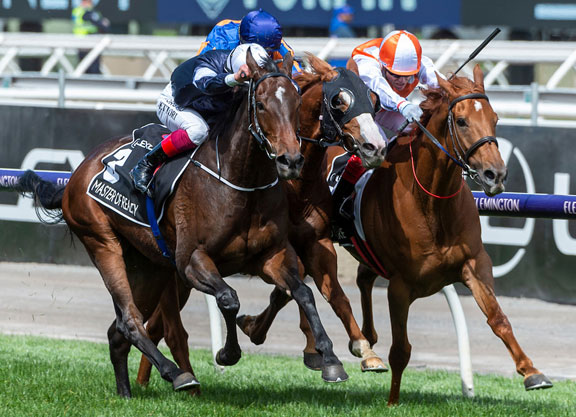 Vow And Declare (inside) winning the Melbourne Cup | Craig Williams

I think I got a little carried away in May last year, after Declaration of War's first-crop son Olmedo landed France's G1 Poule d'Essai des Poulains. I was prompted to draw comparisons between the then-Ashford Stud resident and the same stud's recently-deceased champion sire Giant's Causeway.

The comparison was valid, as there had been several parallels between the two American-bred stallions. As I pointed out, each of them had ended his racing career with a highly creditable effort in the GI Breeders' Cup Classic, Declaration of War's being his close third, beaten a nose and a head, behind Mucho Macho Man and Will Take Charge.

Each of them stood his first season at Coolmore in Ireland before being transferred to Kentucky, and each of them sired a winner of the Poule d'Essai des Poulains in his single Irish crop.

While I conceded that Declaration of War's racing career hadn't been quite as stellar as Giant's Causeway's, both numbered the G1 Juddmonte International over an extended mile and a quarter among their successes and both achieved champion status. Both also proved equally effective over a mile and a mile and a quarter, with Declaration of War's first Group 1 success coming in the Queen Anne S. over a mile at Royal Ascot.

Both also made 13 career starts. The big difference was that, whereas Giant's Causeway collected six Group 1 victories in two seasons of action, Declaration of War's tally stood at just the two in a career which stretched to three seasons. This helps explain why Storm Cat's iron son made his stallion debut at a fee of IR100,000gns, whereas Declaration of War started out at less than half that price, at €40,000. It was a similar story after their move to Ashford, with Giant's Causeway standing the 2001 season at $135,000, whereas Declaration of War debuted at $40,000 in 2015.

Needless to say, Declaration of War found it much harder to win the affections of American breeders, with both his fee and his book size soon heading downwards. After attracting 192 mares in his first year in Kentucky, the son of War Front covered 154 mares at $40,000 in 2016. A reduction in his fee to $35,000 in 2015 didn't help, with his book falling to 128 mares, and a further reduction, to $25,000 in 2018, again failed to halt the decline, with his number of mares dropping to 110.

No one was therefore greatly surprised when an announcement was made in October last year that Declaration of War would stand the 2019 season at the Japanese Bloodhorse Breeders' Association's Shizunai Stallion Station. This now looks to have been a one-way ticket, as there has been no return to Kentucky, despite his having seven North American black-type winners among his 2019 total of 12.

One area where Declaration of War has outperformed Giant's Causeway is Australia. Giant's Causeway shuttled to Australia for three consecutive seasons between 2002 and 2004, standing for substantial fees, but the only Group 1 winners resulting from his travels were Just Momente, winner of the Robert Sangster S. over six furlongs, and Our Giant, in South Africa.

Declaration of War, on the other hand, visited Australia only twice, standing the 2014 season at AUS$27,500 and the following year at only $24,750. He again failed to maintain his popularity, with a book of 125 being followed by 88 mares in 2015. Although he is credited with the comparatively modest total of 155 Australian live foals, that hasn't stopped him making a considerable splash during 2019.

First to draw attention to him was the filly Winning Ways, who landed the G1 Queensland Oaks June 1. Next came the 3-year-old gelding Warning, who was a decisive winner of the G1 Victoria Derby Nov. 2, and then came his greatest triumph, when Vow And Declare repelled a host of foreign raiders to take the G1 Melbourne Cup. Declaration of War's trio of Group 1 winners have respectively gained their major successes over 1 3/8 miles, 1 9/16 miles and two miles. To this I could add that his 2019 European black-type winners include Assiro, a Group 2 and Group 3 winner over a mile and a half in Italy, and Bayshore Freeway, a Listed winner over the same distance.

Even allowing for the fact that Winning Ways and Warning are out of daughters of Galileo, the trio of Australian Group 1 winners have shown ample stamina for horses sired by a son of War Front. Remember, when War Front was mated to Galileo mares in Kentucky, he sired those ultra-tough siblings Roly Poly and U S Navy Flag, the former a triple Group 1 winner over a mile and the latter a triple Group 1 winner at up to seven furlongs. The War Front/Galileo partnership has also been represented by the likes of the very useful sprinters Fleet Review and Battle of Jericho, as well as this year's talented 2-year-old Fort Myers.

Vow And Declare's stamina is made more surprising by the fact that his broodmare sire is Testa Rossa, who gained his six Group 1 successes from five furlongs to a mile. Testa Rossa is probably best known in Europe as the sire of that very fast mare Ortensia, whose trip to Europe yielded victories in the G2 King George S. and the G1 Nunthorpe S. over five furlongs. The fact that Testa Rossa was sired by Perugino, a royally-bred son of Danzig, means that the Melbourne Cup hero is inbred 3×4 to Danzig. If I were asked for my best guess as to the source of Vow And Declare's stamina, I would point to Old Vic, the sire of his once-raced third dam, Young Vic. Old Vic, of course, was responsible for Comply Or Die and Don't Push It, two winners of the Grand National over four and a half miles.

Declaration of War was never tried over a mile and a half, which is understandable in view of his sire's record. While War Front was a stakes winner over 1 1/16 miles as a 3-year-old, it was mainly over six and seven furlongs that he made his name.

Declaration of War ranks alongside The Factor as the only son of War Front to sire a northern hemisphere Group 1 winner. I think is it fair to say that the records of War Front's stallion sons have so far been a little underwhelming, though two inexpensive sons, Due Diligence and Summer Front, have enjoyed group/graded success with their first runners this year. The speedy Due Diligence, who won nothing better than a Listed race even though he was second in the G1 Diamond Jubilee, has done especially well to sire a pair of Group 3 winners and a Listed winner.

There is still plenty of time for other good stallion sons to emerge, as War Front has the likes of U S Navy Flag and Air Force Blue among the unproven sons. There is also plenty of excitement in the U.S. about the prospects of Omaha Beach, a winner of the GI Arkansas Derby and GI Santa Anita Sprint Championship who is scheduled to stand his first season for Spendthrift Farm at $40,000 next year. There will no doubt be a place at stud, too, for War of Will, winner of the GI Preakness S. this year.